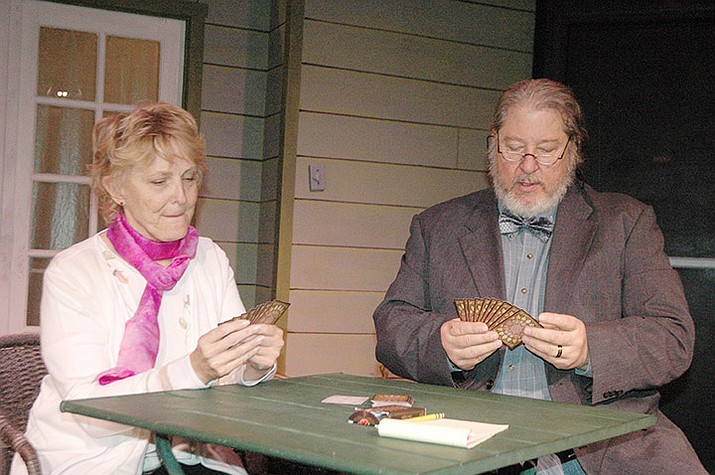 Sandy Vernon and Jonathan Perpich as Fonsia Dorsey and Weller Martin play a game of Gin Rummy in character at Stage Too in preparation for Prescott Center for the Arts’ production of “The Gin Game.” The first showing is at 7:30 p.m. Thursday, Jan. 16. (Jason Wheeler/Courier)

Prescott Center for the Arts is shuffling into its new show, D. L. Coburn’s “The Gin Game,” coming to Stage Too next week.

Directed by Jonathan Perpich, who is also starring in it alongside Sandy Vernon, the play features two elderly residents at a nursing home for senior citizens who strike up an acquaintance and begin playing a series of gin rummy games. It’s not about two old people sitting around playing cards though, Perpich said.

“This is a ferocious battle of wills that leaves one standing and one decimated,” he said. “It’s the journey about the two forces working against one another until the final moment of the play.”

The reason he’s directing the show as well as starring in it, Perpich said, is because the original actor who was supposed to play the role had to drop out because of a medical procedure. A fair amount of itme had already been invested, and he and Prescott Center for the Arts Executive Director Robyn Allen agreed that the only solution was for him to step into the role, Perpich said. He’s directed plays he’s starred in a couple of other times and there are some restrictions, he said.

There’s been some frustration about having to wear the two hats, but with it being a two-person show, he feels confident about his ability to step in and out, he said.

Being directed by an actor of Perpich’s stature and getting a free acting lesson every time she showed up is the reason she wanted to be in the play, Vernon said. Her background in music theatre is wonderful but it’s completely different from straight acting and she wanted to delve into a meaty play, she said.

“He’s been so encouraging and supportive,” Vernon said. “He’s let me build things up and he’s let me try and try and try other things to see what works. He’s always been my safety net.”

A challenge to putting this show on is getting the gin rummy games to coincide with the dialogue when it’s specified what cards are drawn and discarded, Perpich said. To see their solution to the problem, people will have to come see the play, he said.

Tickets are $19, available online at www.pca-az.net. Prescott Center for the Arts is located at 208 N. Marina St. Stage Too is in the alley behind the theater.