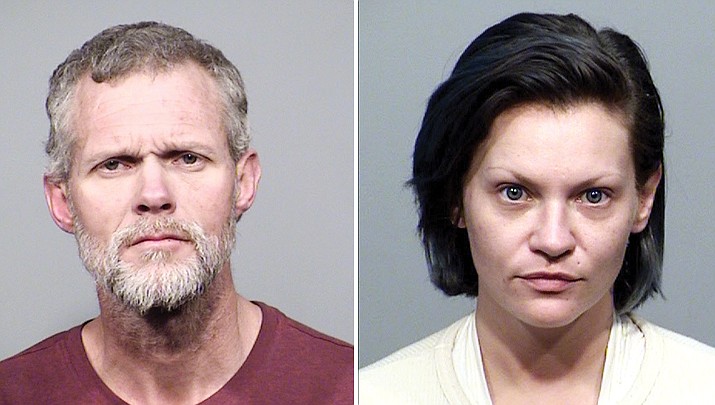 A Village of Oak Creek woman and her boyfriend are now both behind bars after she allegedly used stolen credit card information to bond him out of the Yavapai County jail in late November, according to the Yavapai County Sheriff’s Office (YCSO).

Deputies with the YCSO were assigned to investigate the fraud on Dec. 14.

The victim explained to deputies he used his credit card to book a room at a Sedona-area resort on Nov. 28 and noticed the next day that his card information had also been used to post a $13,625 bond for a man named Michael Ellison. The victim had no idea who Ellison was or how his information had been stolen.

Deputies immediately began working to restore credit to the victim’s account through the bonding company.

It was discovered that the transaction occurred via an online bonding service and that Ellison, 40, was released from the jail as a result, YCSO reported. His pending cases involved numerous drug-related charges resulting from a Partner Against Narcotics Trafficking investigation.

Deputies contacted the resort where the victim used his credit card and learned Ellison’s girlfriend, Jasmine Sizelove, 30, from the Village of Oak Creek, was an employee there.

Resort security personnel confirmed that Sizelove handled the transaction involving the victim and thus had access to the credit card information, YCSO reported.

Deputies were able to review a jail phone call in which Ellison and Sizelove discussed efforts to post bond for him.

On Dec. 21, deputies located Sizelove in the Village of Oak Creek and arrested her despite her denying any involvement. She was booked in the jail on charges including three counts of fraud, and two counts of fraud by impersonation. She remains in-custody on a cash-only $50,000 bond.

An assisting YCSO detective began reviewing video and audio contacts Ellison had with his sister and Sizelove while he was an inmate.

In one conversation, Ellison tells her she is a good “Hustler” and asks her to come up with a way to bond him out of jail, YCSO spokesperson Dwight D’Evelyn said.

During another conversation with his sister, Ellison is heard explaining that he needs to get out of jail because he is facing up to “15 years in prison,” D’Evelyn said.

During the detective’s review, it was learned there were several attempts to use credit card information belonging to various resort guests in an attempt to post a bond, YCSO reported.

The detective did extensive work to determine that a majority of the IP addresses for the transactions were from Sizelove’s cellphone.

The investigation remained active pending subpoenas to a communication carrier requesting the identity of a specific IP address involving the bond payment itself.

In late December, the detective confirmed it was registered to the Sizelove home on Verde Valley School Road in the Village of Oak Creek, YCSO reported.

Meanwhile, Ellison remained out on bond pending court action on the bond fraud.

Around 4:30 p.m. on Jan. 7, a YCSO deputy conducted a traffic stop and found Ellison inside the vehicle.

“Ellison was in possession of stolen jewelry taken from a burglary in Cornville earlier that day,” D’Evelyn said.

Ellison was arrested and booked on a theft charge and remains in-custody on a cash-only bond of $25,000.

“Deputies are working with the County Attorney and courts to reinstate Ellison’s fraudulent bond on the drug charges,” D’Evelyn said.