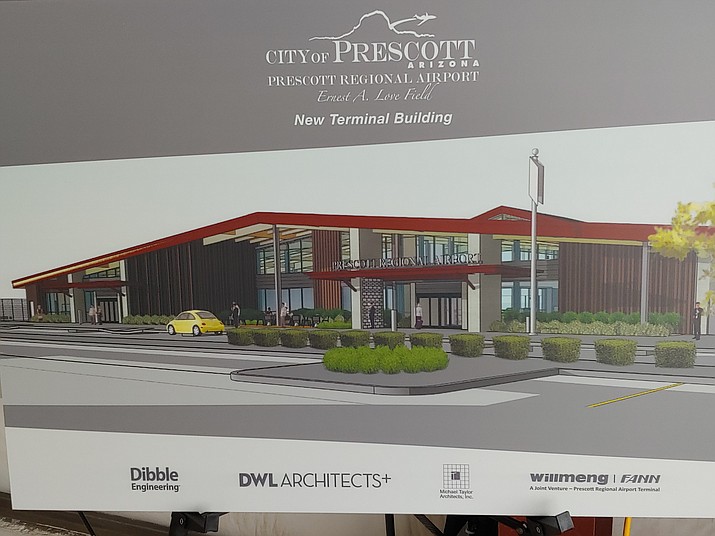 An artist’s rendering of how the Prescott Regional Airport’s new terminal will look from the outside once it is finished, most likely in the spring of 2021. (City of Prescott/Courtesy)

Despite a three-month delay, construction for a new $15 million passenger terminal at Prescott Regional Airport is underway after local, state and federal officials conducted a groundbreaking ceremony Tuesday afternoon, Jan. 7, at Ernest A. Love Field.

In front of an audience of more than 200 invited guests in a west-side hangar, Prescott Regional Airport Director Robin Sobotta said the terminal will alter the economic landscape in the Quad Cities for years to come. 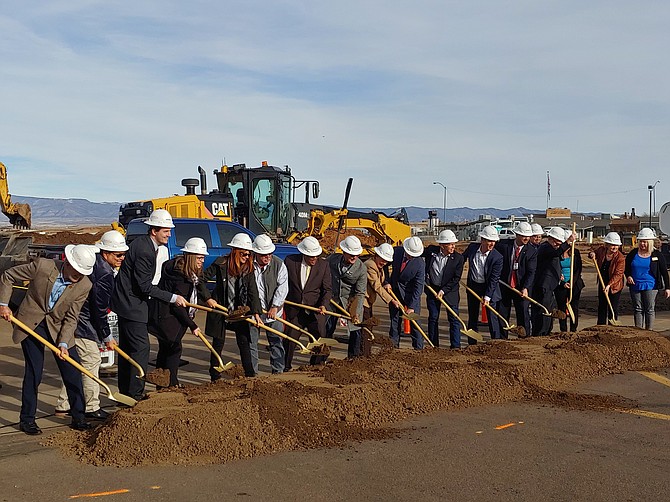 A whole host of local, state and federal officials celebrated the groundbreaking for the Prescott Regional Airport’s new terminal along the airport’s west side. (Doug Cook/Courier)

“We’ve done it!” Sobotta exclaimed. “… We finally have air service that this community has needed for decades. … This terminal will help establish and grow Prescott air service, and it will help from an economic and a growth standpoint.”

The terminal is expected to be finished in the spring of 2021. It will allow for more flights from Prescott to Denver and Los Angeles through SkyWest Airlines and United Express.

“Construction of the terminal will be transformative to the community,” Sobotta added.

Prescott Mayor Greg Mengarelli said the team effort between local, state and federal officials brought the terminal project to fruition. On Aug. 29, 2018, the first 50-seat regional jet completed a flight from Denver to Prescott before moving on to Los Angeles. Since then, more than 73,000 passengers have flown out of Prescott. 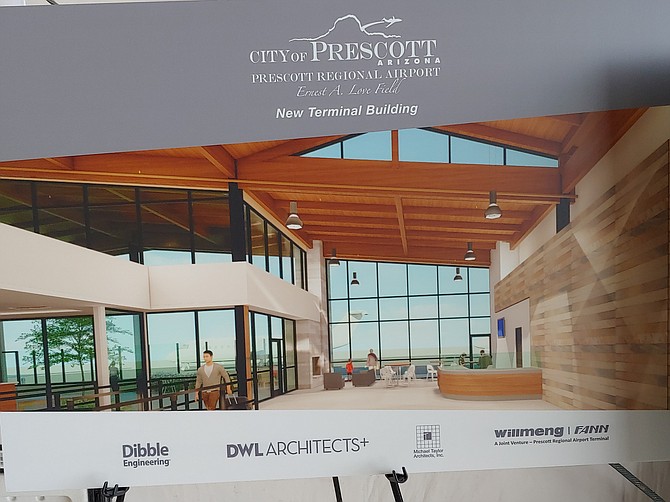 An artist’s rendering of how the new Prescott Airport terminal will look from the inside once it is completed, probably by the spring of 2021. (Courtesy/City of Prescott)

“We look forward to the partnership with SkyWest and seeing more flights out of Prescott,” Mengarelli added.

Prescott City Councilman Phil Goode said the “most significant expansion of our economic future we could possibly have is now a reality.”

Goode commended former Prescott mayor Harry Oberg, who was in attendance on Tuesday, and Sobotta for their efforts. Embry-Riddle Aeronautical University also played a key role in pushing for the new terminal.

“We’ve talked about economic expansion for years,” Goode added. “We have no freeway or rail service, so this was the only way to expand while giving quality service. It’s a huge boon to us now and in the future.”

MOVING ON FROM THE DELAY

Word of the delay on construction came in late September, when Sobotta announced that the city was still trying to secure grant money from the Federal Aviation Administration (FAA). An Oct. 4 groundbreaking was subsequently canceled.

The grant announcement had been expected in late summer/early fall 2019, but it ultimately arrived on Nov. 19. Then, on Nov. 26, the Prescott City Council conducted a special meeting to accept the $10 million FAA grant for the terminal project.

FAA Regional Administrator Mark McClardy, who was in attendance Tuesday, said Prescott was one of four airports in America to receive grant funding in the feds’ latest round of grants. There were 167 total applications. 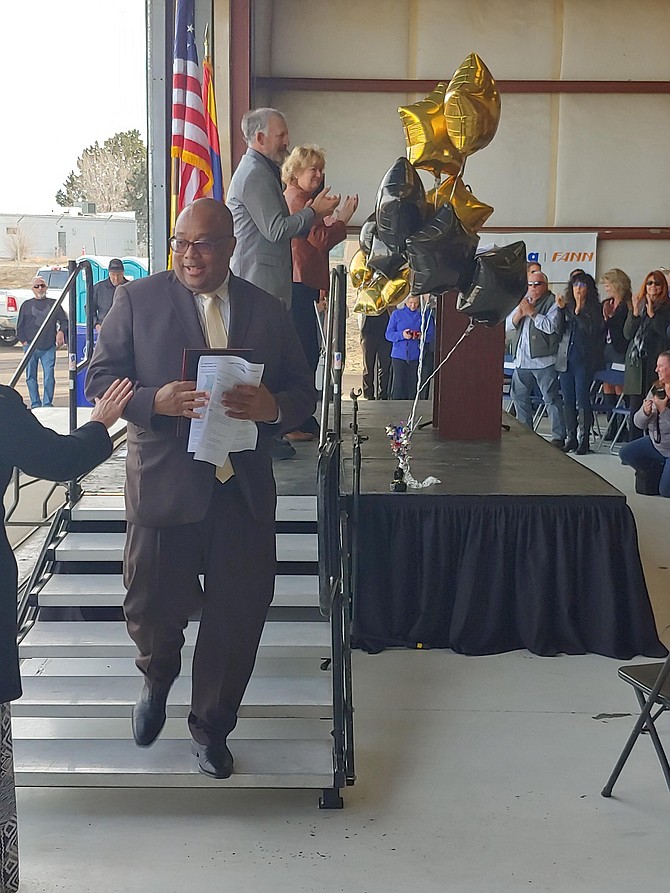 While the terminal’s being built, flights will run on a normal schedule in Prescott.

In 2019, the airport had more than 27,000 enplanements, or passengers who were traveling one way. However, Sobotta anticipates that there will be more than 35,000 enplanements in the next year and 50,000 people boarding within three years.

Sobotta said an economic impact study revealed that a new terminal could generate as much as $160 million per year for the local economy.

The airport’s also going forward with building a newer, longer runway this summer, which will improve commercial service by increasing the number of passengers allowed per flight. A two-lane checkpoint will also be installed alongside the new terminal.

“It’s good for our community; it’s not just a Prescott thing,” Prescott Valley Mayor Kell Palguta said. “We need to work together to create a better quad-city area.”

Terminal project managers Caleb Beath and D.J. Anderson of Phoenix-based Willmeng Construction, which is working with Fann Construction to complete the project, said one of the biggest challenges is trying to keep the current terminal active while relocating utilities to the new terminal site.

Senior Project Manager Jared Bass said the most important aspect to the terminal’s planning was how it will allow for “easy, cost-effective expansion” when the time comes.

The project, which will be built in phases, allows for greater ease of parking and improves safety for takeoffs and landings.

Willmeng has worked on complicated projects at Sky Harbor Airport in Phoenix over the past five years as well as at Mesa Phoenix Gateway Airport. Beath and Anderson say the substructure for the terminal should be erected by September.

“To me, this is a great way to bring more people to and from Prescott,” Beath said of the new terminal. “This is a quick-growing city with easy access to the Quad Cities that’s second to none. It will help people get to Phoenix for flights.” 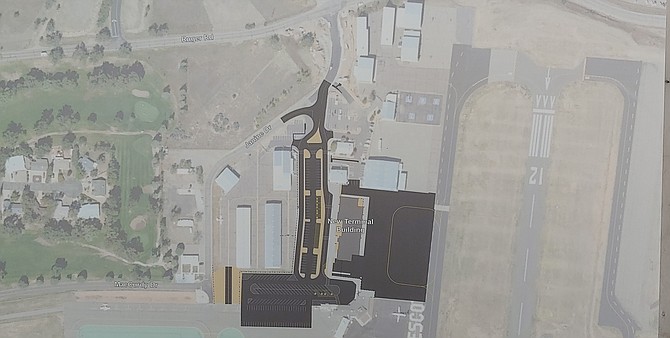 An overhead view of how the new terminal building and parking will be situated at Prescott Regional Airport once work is completed on the terminal, likely in spring 2021. (Courtesy/City of Prescott)