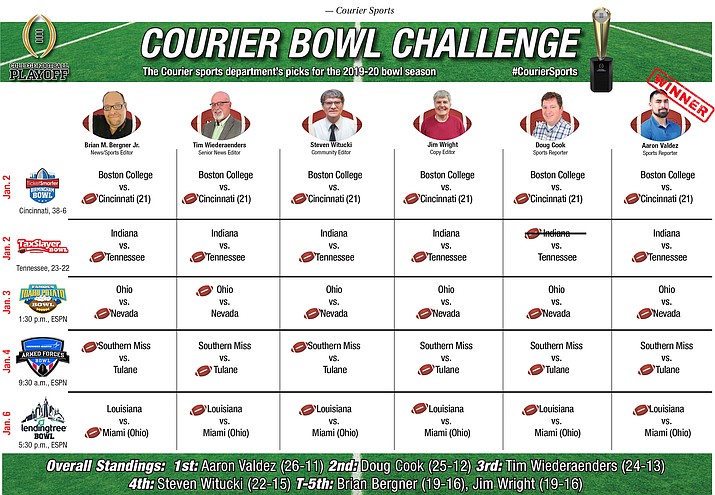 It all came down to one game and while it wasn’t the most high-profile match-up of the bowl season, it certainly made for an ultra-dramatic finish in our 2019 Courier Bowl Challenge.

Coming into Jan. 2, defending champion Doug Cook and newcomer Aaron Valdez were tied for first place with 24-11 records. With the rest of the field already eliminated from title contention, Thursday’s Gator Bowl between Indiana and Tennessee would decide the champion as Cook picked Indiana while Valdez picked Tennessee.

At the end of a slow-paced and defensive first half, Tennessee held a slight 6-3 lead. However, Indiana came in alive in the second half, opening up a 22-9 lead in the fourth quarter.

With Indiana in the lead that late into the game, Cook seemed to be on his way to his second straight Courier Bowl Challenge title. But as the old saying goes: “It ain’t over ‘til it’s over!”

In the final five minutes, Tennessee stormed back and notched two quick touchdowns to take a 23-22 lead. Indiana still had one minute left to make one final drive but Tennessee’s gritty defense got the stop it needed to win the game and give Valdez the title.

Even though there are still four bowl games left, including the national championship, Valdez (26-11) and Cook (25-12) have the same picks in each game. Tim Wiederaenders hangs on to third place with a 24-13 record, Steve Witucki is in fourth place with a 22-15 record while Brian Bergner and Jim Wright are tied for last place at 21-16.

Note: In the Tuesday, Dec. 31 edition of the Daily Courier, the Courier Bowl Challenge graphic at the bottom of page 1B incorrectly depicts that Cook picked Utah to win over Texas in the Valero Alamo Bowl. It should in fact depict that Cook picked Texas to win, not Utah.