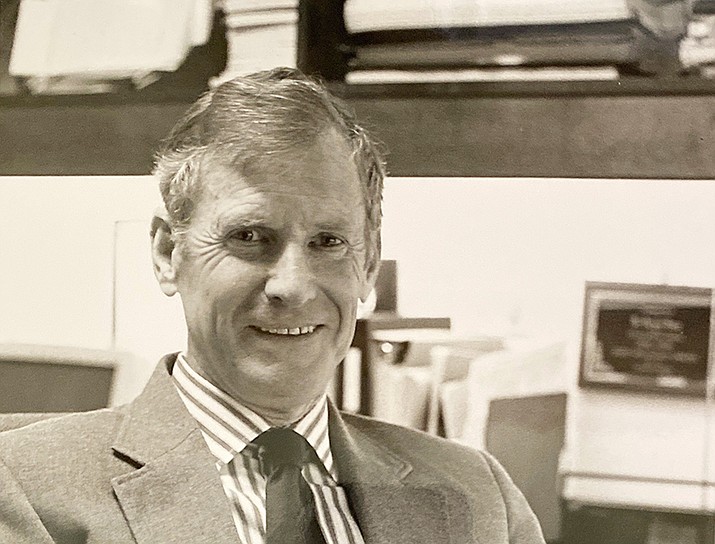 A long-time resident of Prescott, Arizona, Dr. Richard Marshall Boone, age 85, passed away on November 17, 2019 in Boise, Idaho. Richard was born in Colony, Kansas, the youngest of three children, on February 26, 1934.

Richard graduated from Haviland High School in Kansas and served in the US Army during the Korean War. Inspired by his parents’ teaching careers, he pursued the field of education earning BS and MS degrees at Kansas State College.

Richard married Carol Ballard (d. 2017) and they moved to the small town of Rozel, Kan., where he began teaching and coaching at Rozel High School. Anyone who knew Richard knows that his “glory days” occurred while coaching basketball for the Rozel Tigers and leading his team to back-to-back state championships in 1959 and 1960. His small-town giants claimed a Class BB state title and after jumping to a higher class, a B title the next year under the guidance of the young coach who had just finished playing college ball himself. The two teams were inducted into the KBCA Hall of Fame in 2009.

Richard moved to Tucson in 1961, began his family and continued his career in education. He attained his Ed.D. at ASU and, after several teaching and administrative positions, began working at Yavapai College in 1972, retiring there in 1996. While working and raising his family, he was involved in many activities, including as a little league coach, referee, teacher, churchgoer, board member, and volunteer for Nuestros Pequeños Hermanos in Guatemala.

In 2005, Richard married Jan Ryer, and they traveled the US working at state parks, settling in Boise in 2010.