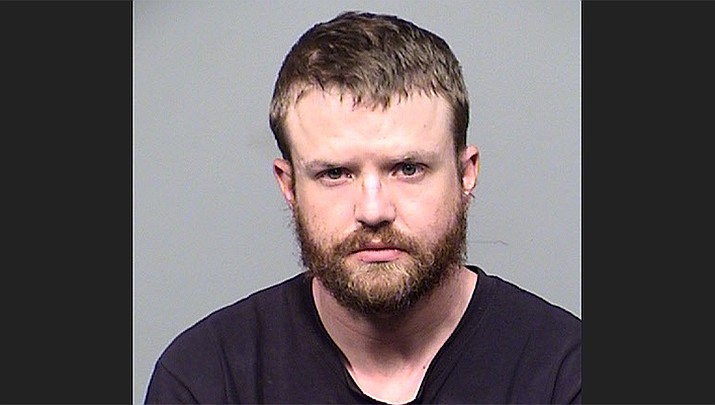 Aaron Wells from Crown King was arrested by the Yavapai County Sheriff’s Office on Feb. 21, 2020. He faces multiple charges, including impersonating a peace officer and prohibited possessor. (YCSO/Courtesy)

Business owners and residents alike shared information posted by Wells in which he asserted he was an Alcohol, Tobacco and Firearms (ATF) agent while threatening those he claimed were spreading rumors about him.

He was using the moniker “Atf Nick,” and was staying in a house on Sunny South Road in Crown King. Wells was known to always carry a handgun.

Among the comments posted by Wells is the following:

“Notice to public of crown king - If anyone keeps rumors going around or any threats they will be held accountable for there actions,” which was followed by a specific list naming several Crown King residents.

Another resident told deputies he recently had contact with Wells where Wells told him he was an undercover ATF agent, displayed a handgun and showed this resident a rifle.

Deputies worked with Yavapai County Sheriff’s Office (YCSO) detectives to complete an extensive background check on the behavior and statements of Wells against Crown King residents.

It was confirmed that Wells was a convicted felon and not allowed to possess firearms and had an active warrant from New Mexico for impersonating a peace officer.

Deputies and detectives developed information as to the whereabouts of Wells during the late afternoon on Friday, Feb. 21. A team of deputies was assembled and able to take Wells into custody just before 6 p.m. at a home on Sunny South Road in Crown King. He was armed at the time of the arrest, which occurred without incident.

Wells gave a fake name at the time of his arrest and identified himself as an ATF agent. After he was confronted with investigative information, Wells admitted he lied on both counts.

Wells was arrested on local charges including impersonating a peace officer and prohibited possessor, along with two felony warrants out of New Mexico. He is being held without bond in the Yavapai County jail in Camp Verde.