Woman dies in rollover crash near Mayer; boyfriend publicly shoots himself nearby 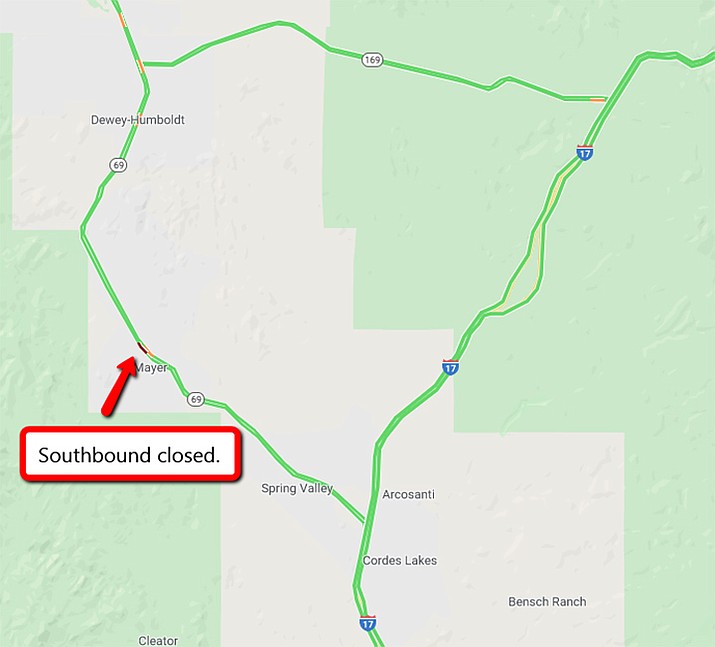 At about 5:23 p.m. on Thursday, Feb. 13, 2020 a woman rolled her vehicle while traveling at a high rate of speed on Highway 69 less than a mile from Mayer’s downtown area.

In a tragic series of events, a man and woman died in connection to a single-vehicle rollover on Highway 69 near Mayer Thursday night, Feb. 13, according to officials.

The two people were considered boyfriend and girlfriend.

The couple had reportedly gotten into some sort of domestic incident before the woman drove off heading south toward Mayer in her blue Subaru, said Mayer Fire Chief Mike McGhee.

At about 5:23 p.m., she rolled her vehicle while traveling at a high rate of speed on Highway 69 less than a mile from Mayer’s downtown area.

Her vehicle ended up in pieces on the side of the road.

She was thrown from the car during the crash and ended up about 100 to 200 feet away, McGhee said. Paramedics found she had suffered a massive head injury and declared her dead on the scene.

It’s unclear whether or not the woman was wearing a seatbelt, said Martin Sotelo, a public information officer with the Arizona Department of Public Safety (AZDPS).

Shortly after the crash, the boyfriend showed up distraught and tried to push past AZDPS troopers to get closer to the wreckage, said Dwight D’Evelyn, a spokesperson with the Yavapai County Sheriff’s Office (YCSO).

“As deputies in the area arrived to assist, they saw the boyfriend run over a hill into a quarry to the south, possibly armed,” D’Evelyn said.

They were told the man had just gotten into a confrontation with his brother, who was trying to calm him down at the scene.

Using binoculars, a deputy spotted the boyfriend kneeling with a gun to his head, D’Evelyn said. Within moments, a gunshot was heard and the boyfriend was seen lying on the ground.

Deputies approached and confirmed he shot himself, D’Evelyn said.

Authorities continue to investigate both the crash and the shooting. The name of the woman has yet to be released by AZDPS. The Courier will not be publishing the name of the man since his death was self-inflicted.

Southbound Highway 69 was closed at the crash scene for several hours. The Arizona Department of Transportation reported it as reopened at 8:55 p.m.