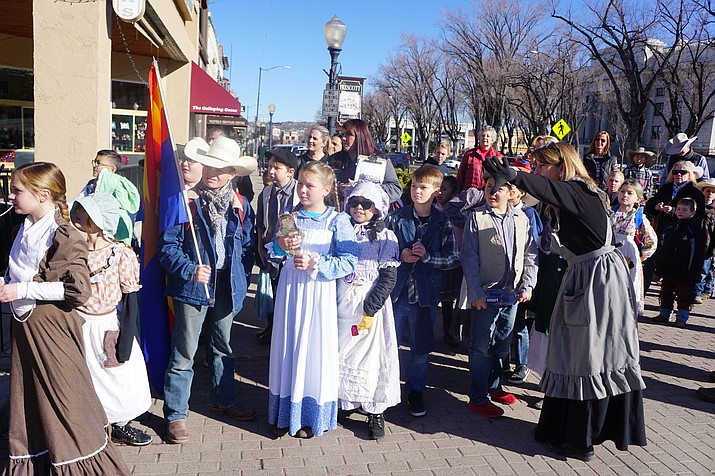 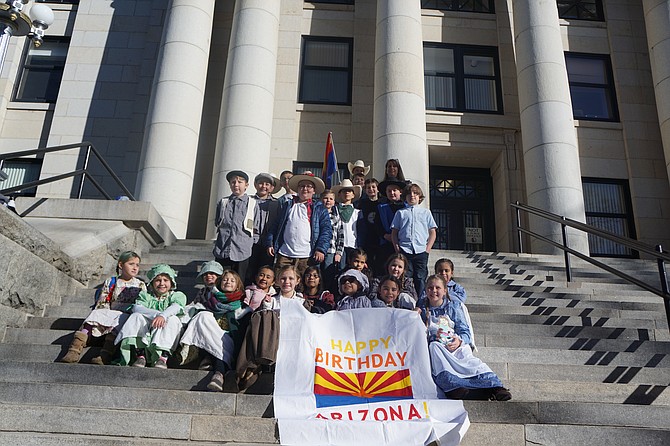 Decked out in braids, bonnets and cowboy hats, a group of area fourth graders took a stroll through Prescott’s history Thursday, Feb. 13.

Already well-versed in the region’s past, the students had a few favorite topics: Mike the Dog; Prescott’s fire of 1900; and the story of The Palace Restaurant and Saloon.

“I like the story of the Great Fire and how it started with a candle and a curtain,” said Isabel Stevens, one of more than 30 students who gathered on the steps of the Yavapai County Courthouse, many in pioneer-period gingham dresses and full-length aprons.

Fellow student Mark Perkins, in cowboy gear and carrying an Arizona flag, said he also was interested in the fire that destroyed much of downtown Prescott, as well as the beloved community dog Mike who is memorialized on the courthouse plaza.

In honor of Arizona’s Statehood Day, Feb. 14, teacher Brenda Hubbard annually guides her fourth-grade class at Chino Valley’s Del Rio Elementary School through a course in the history of Arizona, as well as the local communities.

Hubbard noted that fourth graders typically study Arizona history. For the past 15 years or so, she has taken the course one step further by taking the students to downtown Prescott for a tour of historic sites.

This week, the students started their tour at the courthouse and then stopped in at the historic Prescott Chamber of Commerce building, the Western Heritage Center on Whiskey Row, Sam’s Crossing on Montezuma Street, the Mike the Dog memorial, and the Elks Theater. 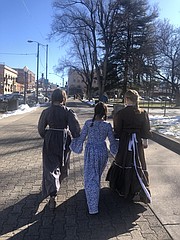 They stopped at The Palace for lunch, complete with a decorated cake celebrating Arizona’s birthday. Hubbard said the group typically ends the tour with a visit to the Yavapai County Superior Court.

The hands-on learning had an obvious impact on the Del Rio students. They were engaged throughout the tour, quickly answering tour guide Joe Childs’ questions, and responding with a few of their own.

Hubbard sees the in-person visit as an important step in the students’ history lessons. Several of the moms who joined the students on the tour agreed, noting that their older children who participated in previous years remember and cherish the Prescott-history field trips.

Childs, the walking tour guide for the Chamber of Commerce, took his duties to heart, regaling the students with the history of Yavapai County’s past courthouses, the origin of the Montezuma Street crosswalk (Sam’s Crossing), and Mike the Dog, a beloved community pet in the mid-20th century.