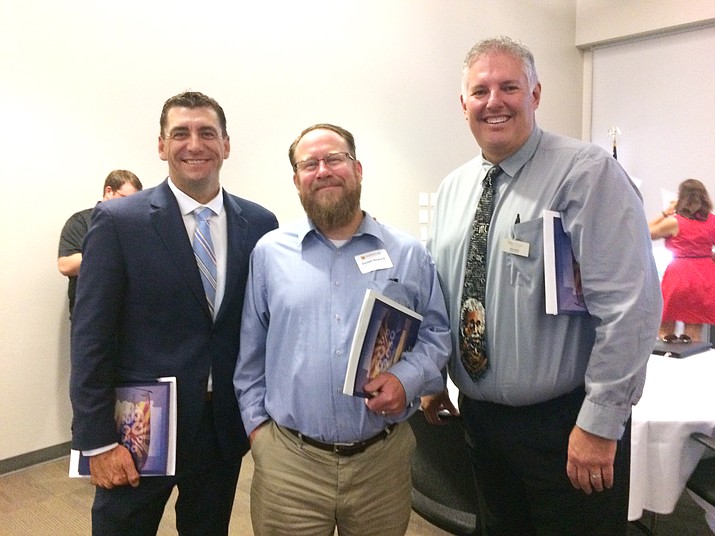 Prescott Unified School District Superintendent Joe Howard said he was in line at Starbucks at 7:20 a.m. when he received a phone call from his colleague.

“Are you calling to wish me a Happy Valentine’s Day,” Howard teased.

The two shared a chuckle before Streeter offered the true intention of the call made just after he notified faculty and staff and before it hit social media.

Streeter, 43, hired to the Humboldt Unified District 11 years ago as the principal at Bradshaw Mountain High School has proved an impressive education leader, one well-respected in local and state circles.

The Marana Governing Board voted unanimously to hire Streeter to lead the district of 12,700 students from a field of 45 national applicants. He will earn an annual base salary of $190,000 plus the state’s 6% annual performance pay plus allowances for mileage, phone and other such benefits, Marana Unified Governing Board President Dan Post said. Streeter’s base salary now is just over $127,000 not including his performance pay.

“He’s just a visionary leader,” Howard said of a colleague he considers one of the “hottest tickets” in state education circles.

“HUSD is leading the way in many areas of education innovation and it’s not surprising that talent from our community would be sought by others in the state,” Gray and Adler said.

Post said the Marana district is “fortunate to attract a man of Dr. Streeter’s talent and character.”

“As board president, I am looking forward to working with Dr. Streeter as we move the district forward to continued success,” Post said in a statement.

Yavapai County Superintendent Tim Carter expressed the sentiments of many: “Dan Streeter is going to be hard to replace.”

In his tenure in Humboldt, Streeter earned a couple promotions into district leadership. He was assistant superintendent when he was chosen as superintendent after a national search.

“He’s just a rising star,” Carter said. “I think he will be fantastic in Marana. But it’s a big loss to HUSD. And they will really have to search to find someone of his caliber.”

Streeter’s decision comes as his eldest son, Colin, prepares for graduation from Bradshaw Mountain High in 2021; his youngest son, Cade, will be finishing his freshman year. Streeter’s wife, Emily, is a member of a four-teacher team with the Glassford Middle School’s 2-year-old iChoose Academy, a personalized instruction program for 100 students of all academic levels. The academy was a Streeter brainchild.

“To be able to do what he did in this district with as little money as the state gives is nothing short of remarkable,” said Grossman, a council liaison to the board.

“He’s a great educator and a great leader,” Scholl said. “I’m happy for him.”

Streeter’s message to staff sums up his “mixed emotions” for the time that for he and his family was the “most memorable of our lives.”

“Serving as the superintendent over these past five years has provided the opportunity to be part of an educational community focused on redefining, redesigning and reimagining education,” Streeter said.

HUSD’s team of “highly effective educators” share an “uncompromising drive to ensure that every student is prepared for success in college, career and life,” he said.

“I have no doubt that the district will continue to move forward and uncover unprecedented opportunities for students. I have always been impressed with the incredible dedication and commitment of the professionals within HUSD. It is without question that the district’s best years lie ahead.”