Governor: New airport terminal example of Prescott’s strong economic development
Ducey: ‘We know the return on investment is going to be large’ 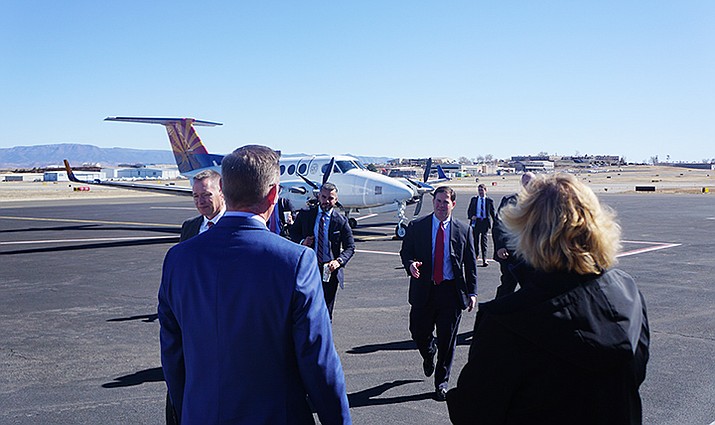 The $1.25 million that the State of Arizona is putting into Prescott’s new airport terminal is expected to be money well-spent, Gov. Doug Ducey told city officials this week.

“We know the return on investment is going to be large,” Ducey said during a brief stop at the Prescott Regional Airport Thursday morning, Feb. 13.

In town for a “State of the State” talk with Prescott-area leaders and business people, Ducey stopped first at the airport to get a first-hand look at the construction that is underway on the new $15 million passenger-terminal project.

There, he met with Mayor Greg Mengarelli, Airport Director Robin Sobotta, and other city officials, along with representatives of project contractor, Willmeng Construction.

With backhoes and dump trucks rumbling in the background, Sobotta told Ducey that the airport has already served about 77,000 passengers since new commercial carrier United Express, operated by SkyWest Airlines, began service in August 2018.

Along with the FAA money, the city also received a $1 million allocation from the state early on, and another $250,000 as a match toward the $10 million.

During a brief meeting with Mengarelli and other City Council members inside the existing 1940s-era airport terminal, the governor cited the new terminal project as an example of strong economic development in Prescott and the rest of the state.

“It’s really nice for me as a governor — somebody who wants to be the chief spokesperson for the state — to not only be able to brag about what’s happening in the urban core, but all over our state,” Ducey said.

Toward that progress, he said, “Yavapai County and Prescott really lead the way in what’s possible for the rest of America. It’s a community that comes together.” 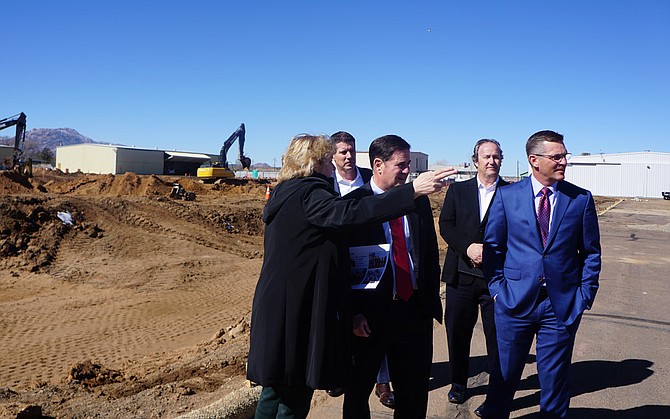 At times, the underground discovery project has turned up surprises from the past. For instance, Sobotta said the work revealed an abandoned well, along with several old water lines. “There were some unforeseen conditions with older utility lines,” she said, adding that, in some cases, the lines dated back to the 1950s and 1960s.

Although the unforeseen conditions caused some delays in the project, Sobotta said the time likely would be made up in coming months.

Sabia noted that foundation work would likely begin by next month, and the building should be enclosed by this summer. The project is expected to be complete by this time next year.

Sobotta said the work could be substantially complete by January 2021, with all of the final punch-list details completed by mid-February.

Also related to the continued strong flight numbers will be some improvements in the flight schedule in months to come.

Also, beginning in about June, the airline plans to switch its daily Prescott-to-Los Angeles flight to 6:30 a.m. — from its current 6:15 p.m. time slot.

Sobotta said the morning flight time would be advantageous for business travelers, as well as those planning to make connections to other locations at Los Angeles International Airport.

Still to come in the airport’s ongoing developments is a possible “land-side study” that will look into issues such as parking, shuttles and rental cars.

The study would require approval by the Prescott City Council, and Sobotta said the matter could go to the council within the next three months.