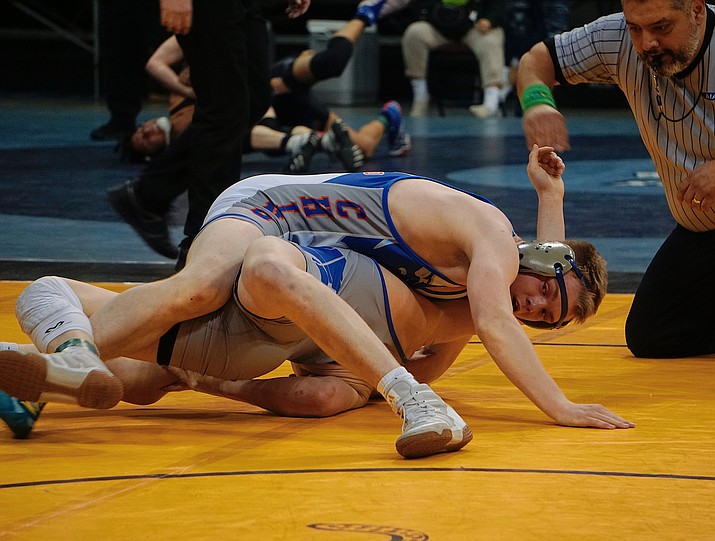 Chino Valley’s Matthew Davis, top, tries to pin down his opponent from Safford during a match at the state meet on Friday, Feb. 14, 2020, at the Findlay Toyota Center in Prescott Valley. (Aaron Valdez/Courier)

PRESCOTT VALLEY — Over 150 schools gathered at the Findlay Toyota Center for the AIA state meet as Chino Valley, Bradshaw Mountain and Prescott looked to make their mark during Day 1 on Friday.

The Cougars qualified six wrestlers for the state meet, including Colby Evens (113 lbs), Cody Jasper (138 lbs), Matthew Davis (145 lbs), Keller Rock (160 lbs), Dakota McMains (170 lbs) and Cesar Ocampo (195 lbs). Rock was at it again as his two victories earned him a spot in the semifinals. This helped Chino Valley finish in 44th place on the day, which was the highest of all Division III, Section IV teams.

Evens also made it to the semifinals after defeating Andru Gomez of Salpointe Catholic and Landen Sanchez of Youngker. Jasper, Davis, McMains and Ocampo all went 1-1 and will try their hand in the consolation bracket on Saturday.

The Bears fielded four wrestlers at the state meet, including Blake Huenemeyer (126 lbs), Nick Foshee (160 lbs), Mike Kelley (195 lbs) and Peyton Hines (285 lbs). Foshee and Kelley both went 2-0 and advance to the semifinals while Huenemeyer and Hines went 1-1 and will continue in the consolation bracket on Saturday.

Huenemeyer nearly pulled off a major upset after he was up 11-9 with 14 seconds left on No. 1-ranked Trey Trejo of Canyon Del Oro. However, Trejo conjured a miraculous comeback effort to even it up with two seconds left and ultimately took the match in overtime.

After Day 1, Bradshaw Mountain sits in 73rd place, which is sixth-best out of all Division III, Section IV teams.

Eby, Smith and Coates all went 1-1 and will go forth in the consolation bracket on Saturday. Francis battled tough against his opponents from Safford and Greenway, but he fell short in both matches, which ended his run in the tournament.

As a team, Prescott currently sits in 84th place.

Day 2 of the state meet will resume Saturday at the Findlay Toyota Center.

Cesar Ocampo of Chino Valley in his first match vs. Brian Castellanos of Sabino at the @ArizonaAIA state meet #CourierSports pic.twitter.com/G2DNhOuhOn 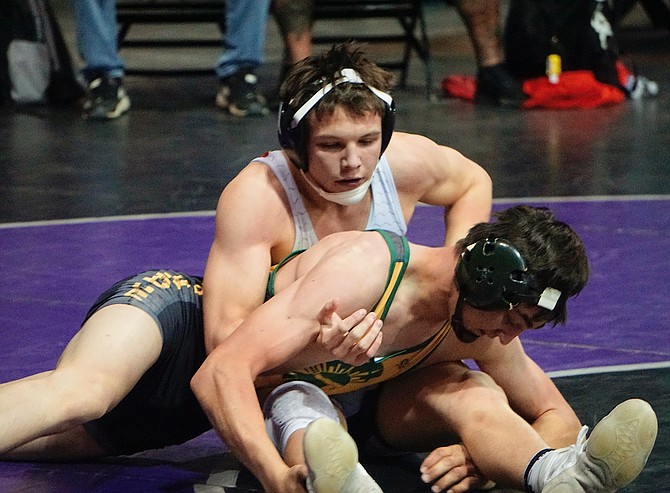 Bradshaw Mountain’s Nick Foshee, top, tries to put his opponent from Canyon Del Oro in an arm lock during a match at the state meet on Friday, Feb. 14, 2020, at the Findlay Toyota Center in Prescott Valley. (Aaron Valdez/Courier) 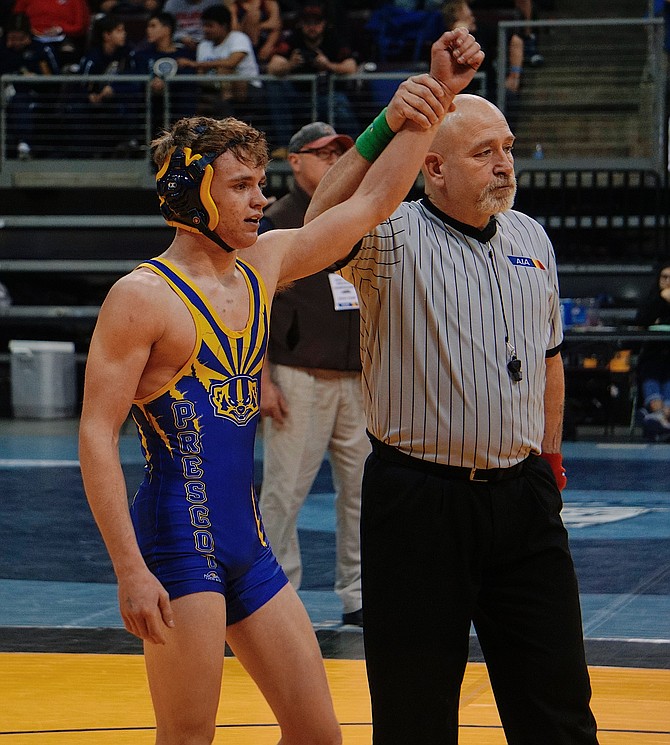 Prescott’s Colton Tomitz is declared the winner over his opponent from Gila Ridge after a match at the state meet on Friday, Feb. 14, 2020, at the Findlay Toyota Center in Prescott Valley. (Aaron Valdez/Courier)