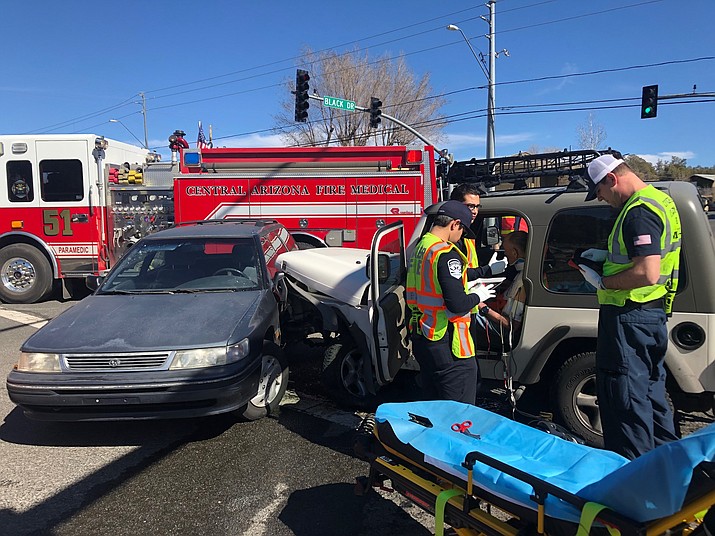 A 63-year-old man in a white Jeep is helped by members of the Central Arizona Fire and Medical Authority on Friday, Feb. 14, 2020, after he drove into traffic and sideswiped a car before hitting another vehicle head on. The driver was transported to YRMC with unknown injuries. (Prescott PD/Courtesy)

A 63-year-old man suffered unknown injuries after driving into oncoming traffic on Willow Creek Road in Prescott, sideswiping one vehicle while colliding with another Friday afternoon, according to Prescott Police.

At 12:30 p.m. Friday, Feb. 14, the 63-year-old driver was traveling northbound on Willow Creek Road and for an unknown reason, went left of the center lane just before the intersection at Black Dr. His Jeep sideswiped and almost collided head-on with a Toyota passenger vehicle driven by a 70-year-old female.

The Jeep continued northbound for about another 50 feet before hitting another vehicle, a Subaru station wagon driven by a 52-year-old male.

Firefighters with the Prescott Fire Department needed extrication equipment to remove the 70-year-old female from the Toyota. 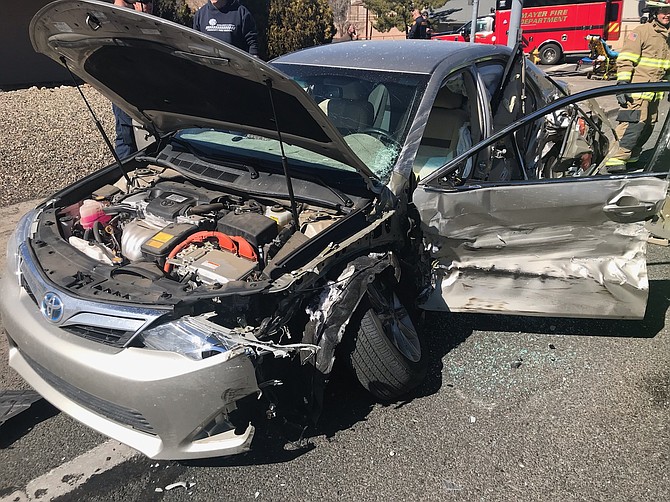 The 70-year-old woman driving this Toyota sedan needed to be taken to the hospital with unknown injuries after she was hit by a 63-year-old man who drove into oncoming traffic on Willow Creek Road on Friday, Feb. 14, 2020. Prescott Fire needed to use extrication equipment to remove the woman. (Prescott Fire/Courtesy)

The drivers of the Toyota and Subaru were transported by ambulance to the Yavapai Regional Medical Center with unknown injuries.

“On scene, the 63-year-old male Jeep driver was not able to talk with first responders and it is unknown at this time if there was a medical condition involved or if there was an impairment issue,” Prescott PD spokesperson Lt. Jon Brambila said in a statement.

Willow Creek Road was closed for about an hour while Prescott PD was on scene to investigate.

“The exact cause of this collision has not yet been determined, members of our Traffic Safety Section responded to the scene to conduct a thorough investigation,” Brambila said.

The name of the driver was not released, and no further information was available.