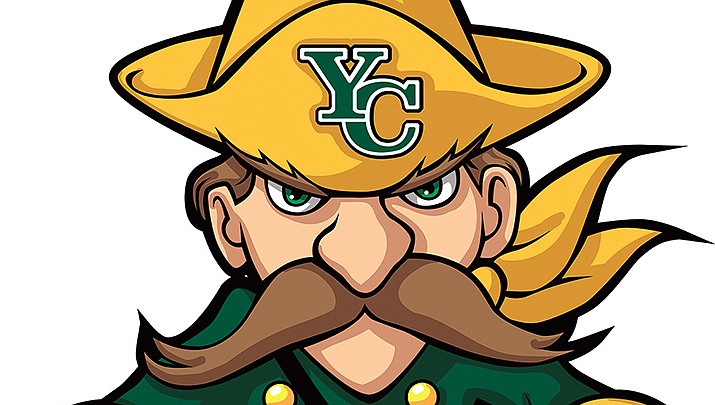 The Roughrider softball team swept a conference doubleheader Thursday afternoon over Mesa Community College in Mesa, 9-0 and 2-1 (8 innings). Yavapai improves to 9-4 overall and 3-0 in ACCAC action. Mesa falls to 8-4 on the year and 2-4 in conference play.

Jackie Traughber got her first of two victories on the day in the opener throwing 5 innings, scattering 2 hits and striking out 2 batters. Cassie Elliott set down the Thunderbirds in order for the final three outs.

The Roughrider offense pounded out 13 hits including 6 for extra bases. Shaylee Alani was 3 for 4 with 2 doubles and four runs batted in. Alyssa Carpio was 2 for 2 with 2 runs scored and 2 RBI’s on a triple. Megan Parsley, Alexis Garayzar and Mikayla Marquez each had two hits.

It was a pitcher’s duel in the nightcap. YC pitching only allowed four hits and struck out five batters. Kamryn Kamakaiwi started the game throwing five innings. Traughber threw the final three innings to get her second victory of the day.

The teams were tied after regulation sending the game into extra innings. In the top of the 8th inning, Marquez chased home Jenna Smith with the go ahead run on a suicide squeeze. Mesa attempted the same play in their half of the inning but the runner was gunned down at home.

The Roughrider baseball offense pounded 30 hits and scored 24 runs Thursday afternoon in a non-conference twinbill against Arizona Christian University in Phoenix. Yavapai is now 8-1 on the year with conference action beginning on Saturday.

In the nightcap, the Green and Gold scored all 10 runs in the first three innings. Encarnacion-Strand, Valdez and Robson each had two hits. Robson had a home run and three RBI’s.

Declan Dutton got the victory on the hill in 1.1 innings pitched.

YC begins conference play on Saturday at South Mountain Community College (5-6, 0-0 ACCAC) with the first pitch being thrown at 12 p.m.