Right At Home: Reclaimed wood’s past adds character to decor 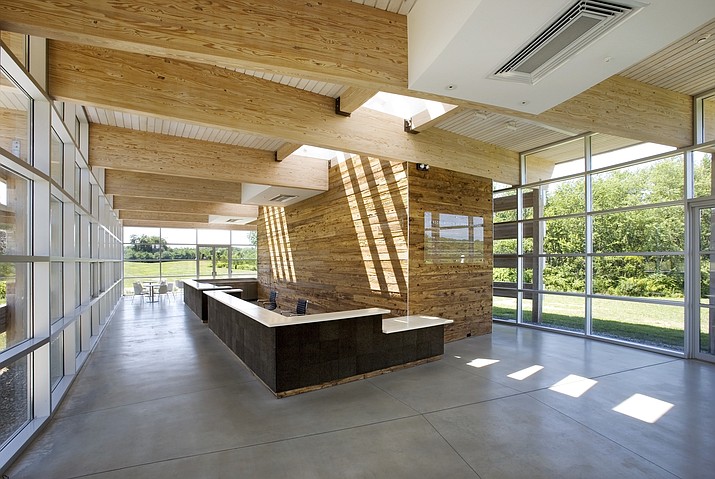 This photo provided by Hudson Company in New York’s Hudson Valley shows salvaged wood paneling at the Omi Center in Ghent, N.Y. The Hudson Company salvages timbers and boards from city water towers, industrial buildings in the Ohio Valley and agrarian structures up in Canada. They also salvage framing from mushroom farms in the mid-Atlantic, like the paneling shown here. (Hudson Company via AP)

In their new book, "Reclaimed Wood: A Field Guide" (Abrams, 2019), woodworkers Alan Solomon and Klaas Armster close with an imagined recounting of one tree’s story from sprout to salvage.

The tale begins in the 1500s, when longleaf pine covered a vast area from North Carolina down to the tip of Texas and the Florida Panhandle — “the largest forested lands in North America,” the authors say. Over the next few hundred years, their pine tree grows to 120 feet. Naturally fire-resistant, it survives storms, woodpeckers, hunters and the Civil War, until it succumbs to loggers in the 1880s.

The tree is then brought to a mill, shipped to New York, and taken by horse cart along cobblestone streets to lower Manhattan. For the next couple of hundred years, its wood frames commercial lofts that hold hat shops and daguerreotype salons. After demolition in the mid-2000s, the pine boards are salvaged by builders to clad the floors of the Park Avenue Armory and make gym bleachers in Baton Rouge, Louisiana.

As the authors write, “the longleaf that had grown in the South and then went North, ultimately kept roots in both places.”

The story describes what could be the life’s journey of many trees whose long-lasting wood was a primary building material in the development of towns and cities.

These days, although many new buildings are made of concrete or brick, there’s a resurgence in using reclaimed wood in everything from ceiling beams to feature walls, furniture, flooring or exterior cladding.

Architects and designers appreciate the narrative that salvaged wood brings to a project, and the physical charm of planed boards with the patina and markings of their life stories.

Solomon and Armster run Sawkill Lumber in Brooklyn, New York, supplying wood salvaged from barns, commercial and industrial sites, and homes to architects, contractors and woodworkers. Sometimes their hardwoods or softwoods are left in their natural state, but the team also "rehabs" beams and boards by refinishing, sanding and giving them coats of protective stains, oils or waxes.

In one case, Solomon says, they acquired wood from dismantled Worcestershire sauce tanks at an old Lea & Perrins plant in New Jersey.

“The wood is high-quality, old-growth Douglas fir, free of knots, with a strong scent of sauce after re-sawing,” says Solomon, who used some of the wood to clad his own home.

The Hudson Company, which has a mill and showroom in Pine Plains, New York, and showrooms in Manhattan and Ridgefield, Connecticut, salvages timbers and boards from various cities’ water towers, industrial buildings and agrarian structures. It has also salvaged framing from mushroom farms; the woods — mostly hemlock and cypress — develop unique characteristics over the fungi’s growth cycle.

Company president Jamie Hammel likes the idea that the wood, often used as paneling in residential and commercial projects, is salvaged from an ongoing agricultural process.

“So, in a sense it’s a renewable resource, because the farmers are continuously updating and replacing the boards from the growing beds. In addition, the caramel color wood tones, fine grain, and sculptural textures offer a unique aesthetic," he says.

Jonah Meyer, who owns Sawkille Company, a furniture design studio in Rhinebeck, New York, praises heart pine for its "wonderful stripes. Heart pines come from the beams of America’s first factories, and of course, these were old growth forests that were being cut. Old growth also means slow growth; the rings of the trees are very tight. Nothing grows like that anymore.”

Meyer crafts chairs, tables and other furniture, some of which he paints with woodland scenes or decorative motifs.

When nature sends something his way, he’ll make the most of it.

“Occasionally we find a huge tree that has come down in a storm, so we cut it up for coffee tables and start drying the pieces. They’re amazing to work with — some are almost 45 inches across," he says. "Over time we get to know the tree, and it’s a good feeling to have saved it from the firewood pile.”