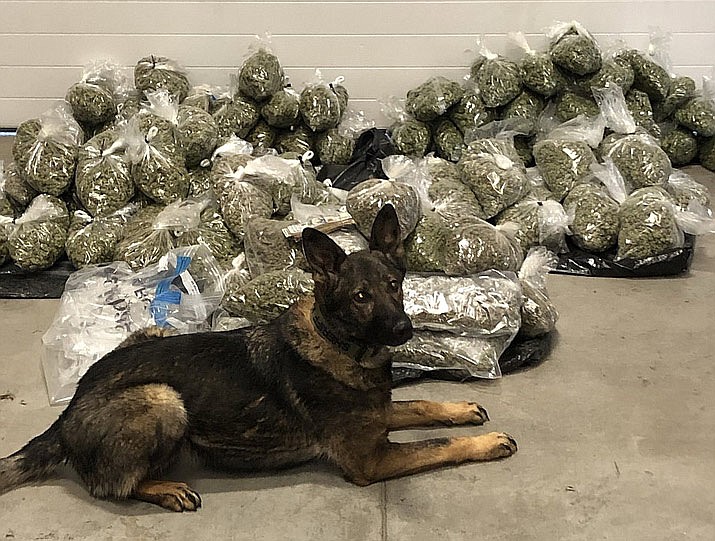 The Yavapai County Sheriff’s Office seized 84 pounds of marijuana during a K9 traffic stop on Interstate 40 in the Ash Fork area on Wednesday, Feb. 12, 2020. (YCSO/Courtesy) 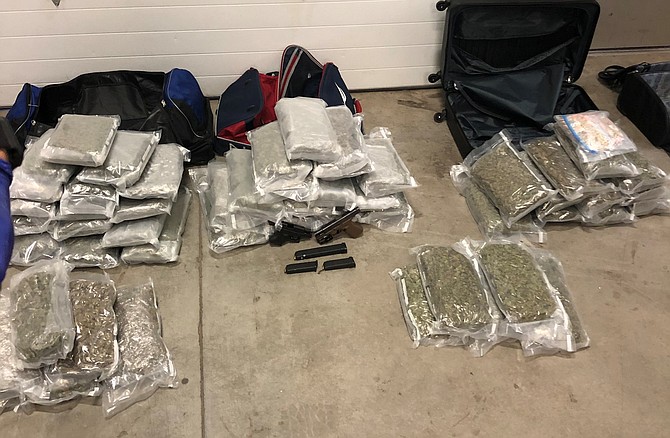 The Yavapai County Sheriff’s Office seized 52 pounds of marijuana, a pound of THC wax and a stolen handgun during a K9 traffic stop on Interstate 40 in the Ash Fork area on Monday, Feb. 10, 2020. (YCSO/Courtesy) 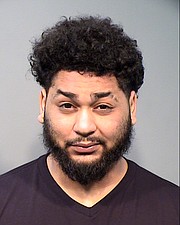 Christian Hurtado was arrested on multiple drug charges and theft of a handgun after a traffic stop on Interstate 40 in the Ash Fork area on Monday, Feb. 10, 2020. (YCSO/Courtesy) 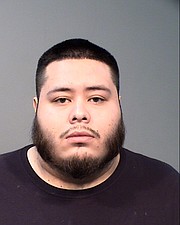 Ruben Torres-Cruz was arrested on multiple drug charges after a traffic stop on Interstate 40 in the Ash Fork area on Monday, Feb. 10, 2020. (YCSO/Courtesy)

In two recent traffic stops, the Yavapai County Sheriff’s Office’s (YCSO) K9 team seized a total of 136 pounds of marijuana, according to a YCSO news release.

In the first case, a YCSO K9 deputy stopped a gray pick-up truck for several moving violations on east Interstate 40 (I-40) in the Ash Fork area around 7:45 a.m. on Monday, Feb. 10.

Driving was 23-year-old Christian Hurtado from Texas. In the passenger seat was Texas resident Ruben Torres-Cruz, 24.

While talking with the two men, the deputy could smell burnt marijuana inside the truck, the release states.

“Hurtado was detained outside the truck, denied the odor of marijuana and was very deceptive about his travel plans with Cruz,” YCSO spokesperson Dwight D’Evelyn said in the release.

The deputy then returned to the truck and spoke with Cruz, who admitted they had been smoking marijuana, the release states. He opened the ashtray to expose burnt marijuana. Both denied there were any firearms in the truck.

A search of the truck revealed 52 1-lb food saver packages of marijuana dispersed between five pieces of luggage, the release states. Included was a food saver bag with 112 individual packages of cannabis wax (a concentrated form of marijuana) weighing nearly a pound.

Deputies also found two Glock handguns and confirmed one of them was stolen, the release states. Hurtado eventually admitted transporting the drugs with intent to sell and to possession of the stolen handgun which he bought “on the street.”

Based on a review of the current prices in Texas, the estimated street value of the marijuana and cannabis wax is about $359,000, YCSO reported. 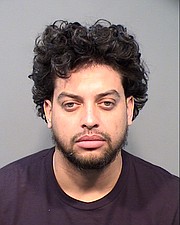 Tyrel Lee Fann was arrested on multiple drug-related charges after a traffic stop on Interstate 40 in the Ash Fork area on Wednesday, Feb. 12, 2020. (YCSO/Courtesy)

In the second case, a YCSO K9 deputy stopped a dark-colored Kia SUV with California license plates after seeing it make an unsafe lane change on east I-40 in the Ash Fork area around 7:25 a.m. on Wednesday, Feb. 12.

The driver and sole occupant was 35-year-old Tyrel Fann from New Mexico.

During the traffic stop, the deputy could readily smell the odor of fresh marijuana coming from the cargo area of the SUV, the release states.

“Fann was unusually nervous during the conversation and deceptive when questioned about his travel itinerary and the marijuana odor inside the SUV,” D’Evelyn said.

A search revealed a total of 84 pounds of marijuana generally separated into 1-lb packages inside trash bags.

Deputies also recovered $9,995 in cash between a travel bag and Fann’s wallet. The cash was held as evidence based on Fann’s involvement in drug transportation and sales.

He was booked into the Yavapai County jail in Camp Verde and remains in-custody on a $40,000 bond.