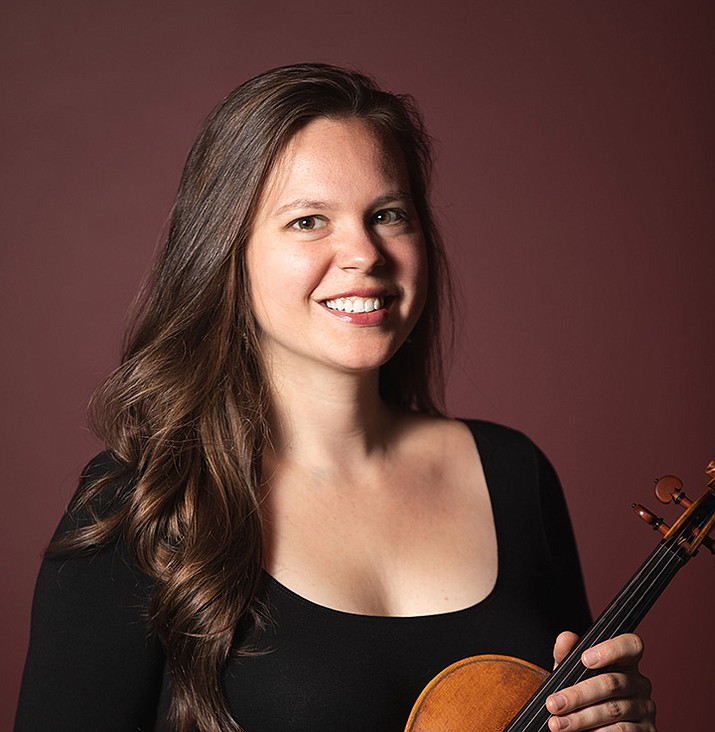 Adrienne Finet will join the Phoenix Symphony as a soloist in the group’s performance of Felix Mendelssohn’s “Violin Concerto in E minor” during its Sunday, Feb. 23, show at the Yavapai College Performing Arts Center. (Sue Bray/Courtesy)

The Phoenix Symphony is coming back to Prescott for a Sunday, Feb. 23, show featuring music by Felix Mendelssohn, Robet Schumann and Fanny Mendelssohn-Hensel with Resident Conductor Matthew Kasper directing and violinist Adrienne Finet joining the orchestra as a soloist.

Finet will join the group for a performance of Mendelssohn’s “Violin Concerto in E minor,” a piece that premiered in 1845, according to a news release from Sue Bray of the Yavapai Symphony Association.

“At that time, it was considered extremely innovative, particularly as the violin soloist enters at the beginning of the piece rather than allowing the orchestra to preview the major themes, and each movement immediately follows the previous one without any pauses,” the release states. “Today, it is still one of the most popular and frequently performed violin concertos in history.”

A native of Indiana, Finet began taking violin lessons at the age of 6 and later studied at the Peabody Conservatory of Music in Baltimore where she received her Bachelor of Music and Master of Music. She joined the Phoenix Symphony in 2013 having previously performed with the Kansas City Symphony, Tucson Symphony and Baltimore Symphony. She also spent nine weeks in Chautauqua, New York as a member of the first violin section of the Chautauqua Symphony Orchestra during the summer. 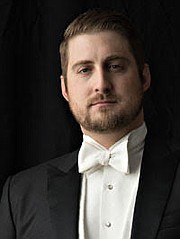 Matthew Kasper, resident conductor for the Phoenix Symphony, will direct the orchestra during its Sunday, Feb. 23, show at the Yavapai College Performing Arts Center. (Sue Bray/Courtesy)

Also set for the concert is Schumann’s “Symphony No. 3 in E-flat major, which he composed in one month.

“It was 1850 and he and his wife had just moved to Dusseldorf, Germany where he had been retained as the conductor of a local orchestra and chorus,” the release states. “He was enchanted with his new home and surroundings and wanted to express his happiness through his music, which has been nicknamed the ‘Rhenish’ or ‘Rhineland’ Symphony. It is the only one of his symphonies with five movements and he conducted the premier himself in Dusseldorf in 1851.”

The orchestra will also perform Mendelssohn-Hensel’s “Overture in C,” which is the only orchestral work she ever wrote, believed to have been composed in her mid-20s, and was not published until after her death.

This show will be one of the more unique and interesting concerts of the season, said Yavapai Symphony Association President Arlon Inman in the release.

“It’s great classical music, including the more well-known pieces by Mendelssohn and Schumann along with the lesser-known composition from Fanny Mendelssohn-Hensel,” Inman said.

The concert begins at 3 p.m. with a pre-concert lecture at 2 p.m. in the Yavapai College Performing Arts Center, 1100 E. Sheldon St.

Tickets start at $29, available at the Yavapai Symphony Association Office, 228 N. Alarcon St, from 9 a.m. to 2 p.m. Monday through Thursday and the Friday before each concert or by calling 928-776-4255. Full-time college students can purchase any available ticket for $10.

For more information about the Yavapai Symphony Association, visit www.yavapaisymphony.org.

Yavapai Symphony Association announces seven-concert season
It is not springtime; whatever possessed me to think it was a great idea to clean the shower?
Phoenix Symphony returns to Prescott for seven concerts
Gomyo performs Mendelssohn's Violin Concerto at Phoenix Symphony Concert
Steven Moeckel performs as soloist for Phoenix Symphony concert