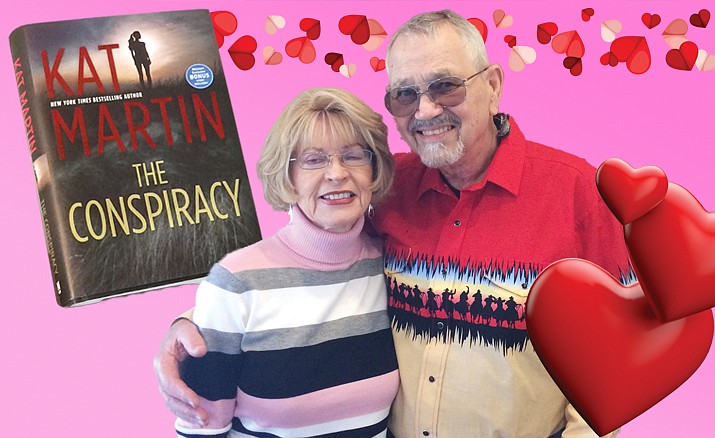 Kat and Larry Martin are prolific writers who have found inspiration in Prescott. (Nanci Hutson/Courier)

Larry and Kat Martin are the authors of their own 35-year love story — their life pages filled with wanderlust, creative genius, familial and financial ups and downs, good food, friends, and yeah, lust.

The vivacious, Cupid-struck couple “old enough for Medicare” are prolific writing phenoms — he pens western adventure, history and mysteries and she is an internationally published New York Times bestselling author of more than 75 romantic thrillers and historical fiction. 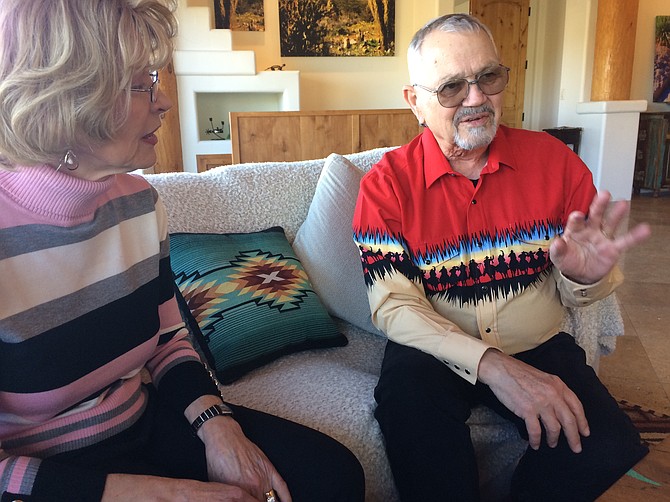 The couple talking in the living room of their new Prescott home near Thumb Butte. (Nanci Hutson/Courier)

The spark for Kat’s creative imaginings occurred when Larry, whose fiction moniker is L.J. Martin, asked her to edit what became not his first published novel, but one his wife suggests is one of his best, “Shadow of the Mast.”

The two each published their first books in 1988.

Six months ago, this dynamic duo originally from Bakersfield, California, departed their love/writer’s ranch in the Sapphire Mountain range of Missoula, Montana, for a leisure trip to Arizona. They said they stopped into the Palace Saloon on Whiskey Row and fell in love with Prescott’s still-apparent frontier heritage.

Post haste, the one-time real estate brokers sold off a vacation home in California and bought a spacious home in the Thumb Butte area, where they hope to immerse themselves as part-time Prescottonians. The still-busy writers — he has a first-floor office suite and she a smaller downstairs office with a picturesque mountain view — have already tapped into the Prescott Westerners.

And Larry is clear that’s just the start.

He is an avid scenery photographer, outdoorsman, traveler and adventurer. His wife, too, loves all things nature, travel, domestic and foreign, and is always open to new discoveries. She’s an avid reader of all kinds of fiction, but her favorite pastime is hanging out with her husband.

As Prescott newcomers, the two have already scoped out some favorite Prescott eateries. But they also like to cook and entertain. They are now building a bar Larry designed in their all-window living room. Larry has a cookbook to his writing credits, and on a recent morning his wife praised one of his baked treats — a caramelized banana coffeecake. In all things, his ebullient wife is his biggest cheerleader.

The couple have no children together. Larry has four adult sons — one now deceased — and eight grandchildren.

On a day-to-day basis, when not on book tours or traveling, the two keep a schedule that allows them to do their own separate writing work.

For more information on L.J. Martin and Kat Martin, visit their websites: www.ljmartin.com and www.katmartin.com

Kat is now immersed in the publishing of a fourth title in her Maximum Security thriller series and Larry is working a “retrospective” titled “One Eyed Jacks” about the solo film directed by the late Marlon Brando. He, too, is still working to sell a screenplay about the banning of the classic John Steinbeck novel, “Grapes of Wrath.”

“We’re writers. We write all the time,” Larry declared of the two who together have published more than 135 books — about 75 of Kat’s books have sold both nationally and internationally. Larry’s book, “Rugged Trails,” is a top seller now on Amazon. Until four years ago, Larry was the founding partner in his own publishing company.

The two say they steer clear of acting as each other’s critics or editors. They said they don’t read every word each other writes. They do, though appreciate each other’s genres, and if either one is obsessing over a scene or some dialogue the other will serve as a friendly sounding board.

Larry jokes he was not “old enough” to read what he describes as his wife’s early “bodice rippers.”

“Fist fights and guns are my bailiwick,” Larry said with a chuckle as his wife teases him about one of his books, “Shadow of the Grizzly,” about a “badass bear” who the editor forced him to kill off. Larry said he wasn’t thrilled with the idea as “I grew to love him (the grizzly). His wife shakes her head. “He ate a kid.”

Larry said he knew at almost first glance Kat was to be the sparkling diamond in his life.

In story form, Larry tells of how before he proposed he searched for the largest, most sparkling diamond he could afford. As luck would have it, when he found the one he liked the price was an exact match to the cashier’s check he had in his pocket from a just-completed real estate sale.

In the lean financial years as they struggled to market themselves as writers, Kat hid the diamond under a kitchen drawer because they couldn’t afford the insurance. Five years later, once they were making what she called a “livable wage,” Kat remounted the stone that speaks not only to their love but their career determination.

The two tell some interesting tales of how they marketed their work — Larry actually took one of his early, small publication books and put it in the pocket of a Bantam Books publisher advising him it might be a “something to read on the plane.”

On this Valentine’s Day, the Martins are still like giddy teenagers. Their affection and admiration for each other is palpable.

Always the storyteller, Larry said early in their marriage and writing careers he made the mistake of booking an exhausting 4 a.m. to 11 p.m. book signing tour for his wife on Valentine’s Day. Never again.

“He’s a lot of fun,” Kat said of her husband. “He’s a really good person to keep me going in life.”

“If I didn’t like her, I wouldn’t be here,” Larry said as he squeezes her hand. “She is absolutely diligent, and hardworking to a fault. She encourages me.”

“Life’s been so much more interesting being married to him,” Kat declared.