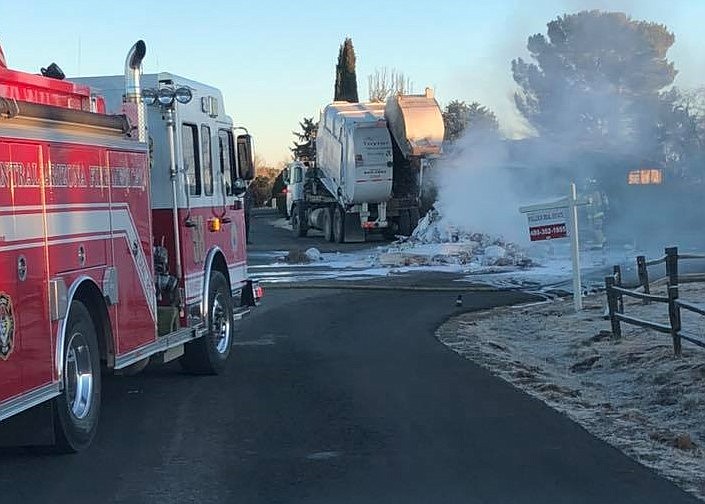 A load of flaming trash is extinguished after a garbage truck dumped its contents on Ramada Drive in Prescott Valley Thursday morning, Feb. 13, 2020. (CAFMA/Courtesy)

There’s nothing quite like the smell of burning trash in the morning.

Unfortunately, that was the case on Ramada Drive in Prescott Valley around 7:30 a.m. on Thursday, Feb. 13.

A garbage truck driver noticed smoke coming from the back of the vehicle and dumped its load in the middle of the residential street.

This practice is standard protocol so as to save the truck from being damaged. The protocol also advises to keep onlookers away from the burning heap and to call the fire department.

While the exact origin of the fire wasn’t determined, CAFMA officials said these sort of calls this time of year are usually caused by improper disposal of fireplace ashes.

“People will dump them right into those big plastic trash cans while it’s still hot and it’ll catch the other trash on fire,” said James Seetes, an acting battalion chief for CAFMA.

Seetes said the recommended way to dispose of ashes is by putting it in a metal container, waiting for it fully cool, and then placing it in the trash.