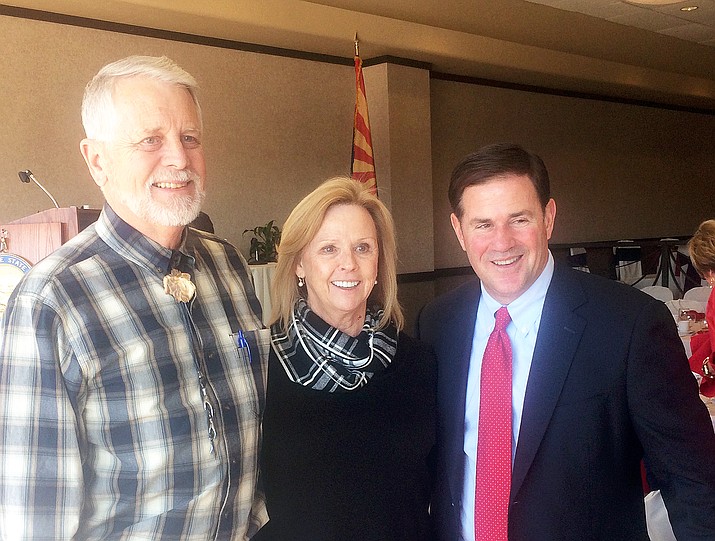 Carl and Marsha Mueller pose with Gov. Doug Ducey at the Prescott Resort on Thursday, Feb. 13, 2020, after Ducey briefed local leaders and business owners on the State of the State. (Tim Wiederaenders/Courier)

“The State of the State is strong, and it’s only getting better.”

Gov. Doug Ducey opened his remarks to Prescott-area leaders and business people with those words Thursday, Feb. 13, at the Prescott Resort, in a visit to convey his views on the State of the State.

In his speech, Ducey shared some Arizona rankings:

“NO. 1 INBOARD STATE IN AMERICA” — with more people moving to Arizona than any other place; “… and don’t worry, we will remind those Californians that they left California for a reason and keep Arizona, Arizona,” he said to a round of applause.

The state’s growth is reflected in its growing revenue, Ducey said. Lawmakers currently have upwards of $600 million extra to work with. “We’re not going on a spending spree,” he said, adding that the state will continue to be consistent.

“As I have said in two inaugurals and five State of the State speeches,” Ducey said, “we are not raising taxes on my watch.”

Still, with extra revenue this year, “we will instead give back to those who need it most,” he said, referring first to veterans.

His 2020-21 state budget proposal includes eliminating income taxes on veterans’ pensions, as well as spending $4.6 billion over five years for transportation and infrastructure — including widening Interstate 17; investments in Yavapai College training programs; K-12 education, such as more school counselors, a “focus on school safety,” investing in shop classes and the Teachers Academy; among other items.

“THE NO. 1 APPLAUSE LINE IN MY STATE OF THE STATE (when he delivered it to the Legislature in January) … was when I said Arizona has 15 counties” — This year’s budget will have a rural focus, such as tripling broadband grants for internet, smart corridors and the Rural Jobs Initiative, Ducey said.

Arizona has always been known for growth, especially in construction, he added. “The state has been diversified,” now with more jobs available in the manufacturing sector. The money he plans to allocate to Yavapai College, for instance, will bolster training programs for that field. 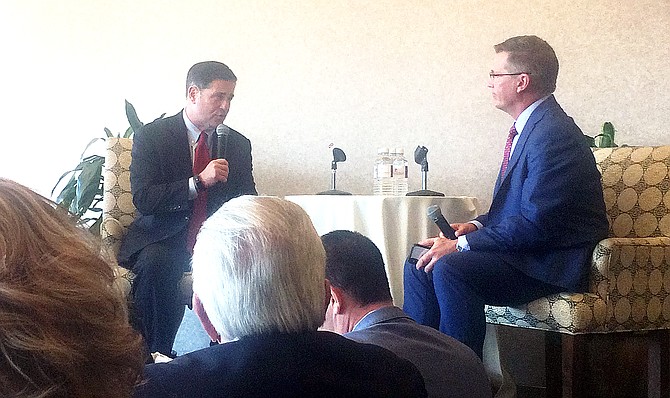 Gov. Doug Ducey and Prescott Mayor Greg Mengarelli have a conversation on issues at the Prescott Resort on Thursday, Feb. 13, 2020, after Ducey briefed local leaders and business owners on the State of the State. (Tim Wiederaenders/Courier)

Ducey also spoke of trimming government. When he took office, there were 11,000 “unnecessary” rules and regulations in Arizona. With an eye on protecting public health and safety, 2,289 regulations have been eliminated since 2017 — equating to a “$134 million tax cut without costing the General Fund one penny,” he said.

“We’re not slowing down and no one’s going to catch us,” Ducey said, adding that through his efforts in nullifying prior executive orders, 18 boards and commissions have been eliminated.

The governor also touched on several other hot-button issues, such as immigration and the rule of law. “This November, we’re working to give all Arizonans the ability to say yes to Arizona law and no to Sanctuary Cities,” he said, hinting of a ballot measure.

OTHER FIRSTS — Arizona in 2015 was the first state in the nation to pass the American Civics Act, requiring high school students to pass the citizenship test before graduation. Ducey said he wants to expand on the study of how to be an engaged citizen. He wants to increase the passing score.

Also, Arizona was first in universal recognition of certification. “It’s common sense. It’s not Democratic or Republican, we’re open for opportunity in Arizona,” he said, referring to the state accepting workers’ certifications from other places so they can go straight to work here.

During his speech, Ducey addressed Carl and Marsha Mueller, who were sitting in the audience. The Prescott couple’s daughter, Kayla, was killed in 2015 after being kidnapped and held for more than 500 days by ISIS.

Ducey announced that a painting depicting a Special Forces raid, in honor of Kayla, will be “memorialized” at the State Capitol in Phoenix.

The Muellers, who also were honored during President Trump’s State of the Union speech this past week, said afterward they are thankful for Ducey’s help — “which has been immediate. He said, ‘Let’s get it done.’”

The painting will be framed locally; watch The Daily Courier for the story behind the effort to “bring Kayla home,” as Marsha said.

When Ducey was taking questions from the audience, Chino Valley Town Manager Cecilia Grittman said the town has struggled with road funding, asking whether the governor will support an increase in the gasoline tax — which would help pay for road maintenance.

Ducey pointed to the $4.6 billion over five years for infrastructure that is in his budget proposal. “We are better prepared now,” he said, compared with “no money” during and just after the Great Recession.

Grittman said later she understands what the governor is saying, but that “I think the gas tax should be looked at.” Knowing that Ducey said he will not raise taxes, Grittman said: “Yeah, I think (increasing gasoline taxes to benefit road maintenance) is a hard push up the hill.”

Another question, from Ken Bennett, who is a former Prescott resident and council member, and represented Prescott in the state Senate (1999-2007), centered on the Public Safety Personnel Retirement System (PSPRS), asking if the governor could help with the municipalities’ unfunded liabilities.

For the pensions, “it has been called the least dirty shirt in the closet.” He said for the retired policeman on a pension, “the money is there.” Work remains to be able to say the same for the first responder who was hired yesterday; “we continue to take small steps toward addressing this,” he said.

“We’re committed to take steps and leave the state better than we’ve found it,” said Ducey, who is not running for re-election.