Deer stranded on ice manages to swim across river 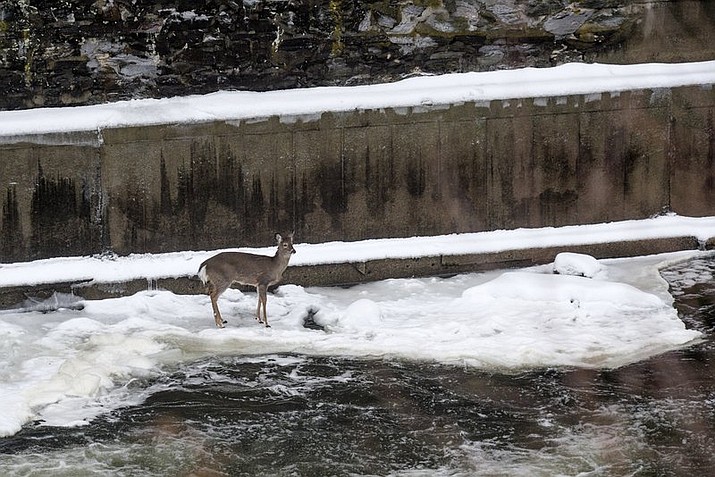 In this Monday, Feb. 10, 2020, photo, deer stands on a diminishing patch of ice in the Sugar River in downtown Claremont, N.H. New Hampshire Fish and Game officials and Claremont Police encouraged onlookers to leave the area hoping the deer would find its way across the shallows to an area where it could safely leave the riverbank. (James M. Patterson/The Valley News via AP)

CLAREMONT, N.H. — A deer stranded on a chunk of ice on a river that caused bystanders a lot of anxiety made it across the water, the New Hampshire Fish and Game Department said Tuesday.

Col. Kevin Jordan said an officer saw deer tracks coming out of the Sugar River onto the bank in Claremont early Tuesday.

For hours Monday, passers-by watched the deer sitting on the ice. People wondered if she could be rescued. Stephen Morse, of Unity, arrived at the river Monday afternoon with yellow rope and gloves.

“I’m willing to lend a helping hand any way I can,” he told the Valley News. “But it doesn’t look like I can do anything.”

Jordan said a rescue attempt was risky. It could stress out the deer. An attempt to tranquilize it might startle her.

Officers decided to wait the situation out, hoping that with the cover of night and fewer people around, the deer would feel safe enough to swim out on her own.

As for how the deer got on the ice, Jordan said she likely was pursued, probably by coyotes.