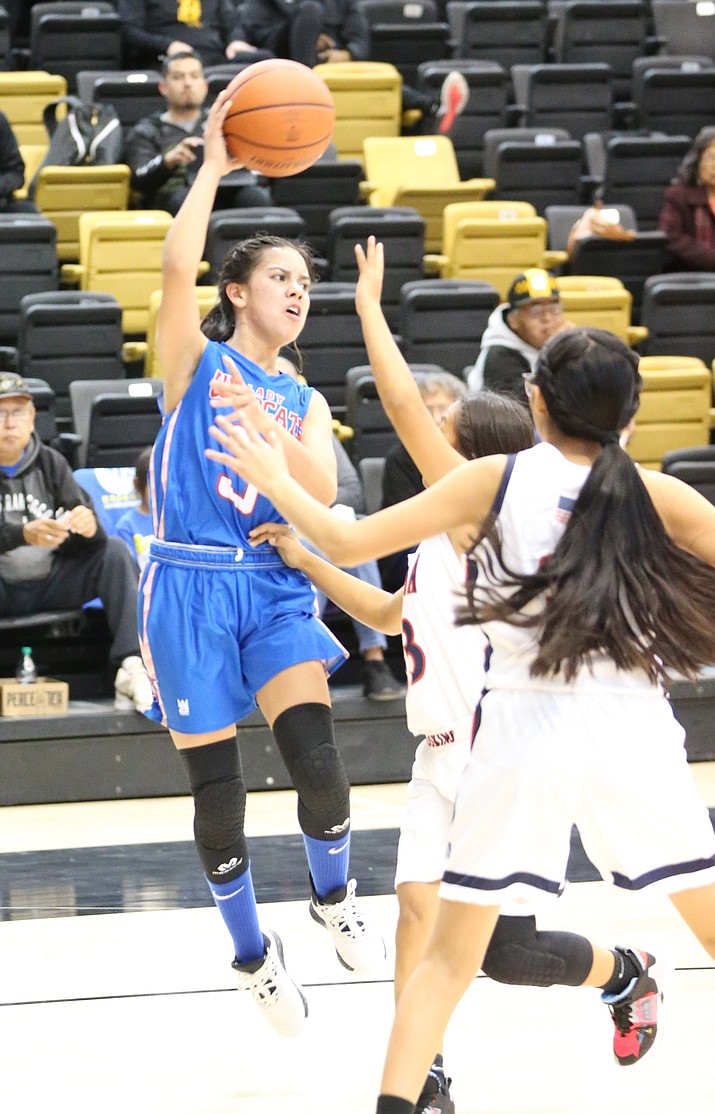 Mayer guard Belen Vega (3) makes a midair pass during a game against Red Mesa in the Choice Wireless Classic on Thursday, Dec. 12, 2019, in Chinle. (Nick Colquitt/Courtesy)

MAYER — A major playoff dry spell for Mayer girls basketball has finally been lifted as the Wildcats qualified for the 1A state playoffs for the first time in over three decades.

The Wildcats finished the regular season with a solid 14-14 overall record and a regional tournament record of 11-9. Their efforts this season garnered them a No. 15 spot in the AIA 1A Rankings, which is good enough for a playoff berth as only the top-16 teams qualify.

Standout players for the Wildcats include sophomore Abbigail Colquitt, who averaged nine points per game and a whopping 18.4 rebounds per game. As a result, she led the entire state (1A-6A conferences) in total rebounds with 478 and grabbed a school-record 31 rebounds in a game against Williams on Jan. 18. Colquitt was voted as a 1A All-Central Region First teamer.

“It’s exciting. It’s something that most these girls have worked hard for two or three years now,” Mayer head coach Nick Colquitt said. “We put in a lot of time during the summer and even pushing harder during the season.”

Finalized brackets were released Wednesday and Mayer will travel to No. 2-ranked Rock Point for the play-in round of the state championship, which will be on Friday, Feb. 14. From the quarterfinals and on, all games will take place at the Findlay Toyota Center in Prescott Valley.