Census 2020 numbers will be Prescott’s ‘legacy’ through 2030, says bureau official 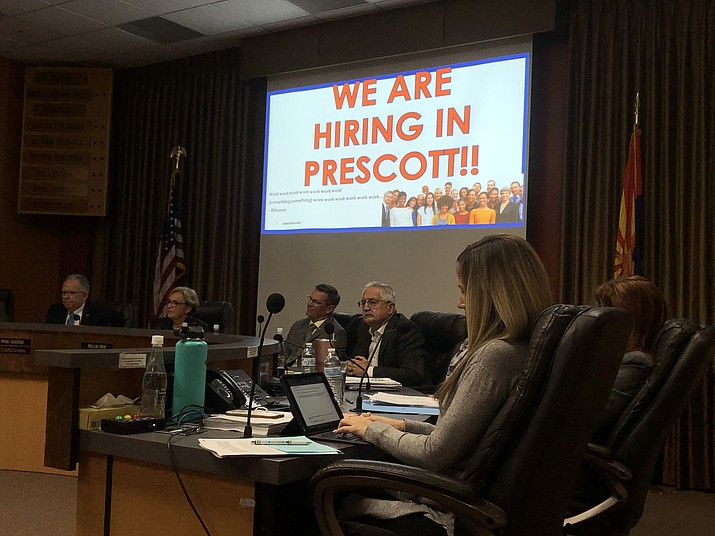 The Prescott City Council listens to an update on the Census 2020 process from Census Bureau Partnership Specialist Kimberley Robinson, who pointed out that the bureau is seeking employees to help with the Prescott census. Information is available on the Census website at: https://2020census.gov/en/jobs. (Cindy Barks/Courier)

The answer to that crucial question will have long-lasting implications for the community, Census Bureau Partnership Specialist Kimberley Robinson told the audience during a Tuesday, Feb. 11 Prescott City Council meeting.

“This is how Prescott is going to be remembered — ‘Are you growing or are you staying the same?’” Robinson said, adding that the results from the 2020 Census would be the community’s “legacy through 2030.”

Along with helping to determine how much state and federal money the community will receive over the next decade, the state census numbers also will be used to determine Arizona’s U.S. Congressional representation.

Prescott Mayor Pro Tem Billie Orr, who serves on the Arizona Complete Count Committee, said the number of the state’s Congressional districts will likely grow from nine to 10 after the 2020 Census, and could possibly increase to 11.

Through an accurate count in 2020, Orr said, “We stand the chance of getting another Congressional district.”

The preliminary work for the 2020 Census count has been underway for months, and in March, the effort will officially go to the public.

“On about March 12, you will get a postcard in your mailbox,” Robinson said, adding that the postcard would include an identification number.

Starting March 12, residents will be able to use that number to respond to the Census — either by telephone or online, Robinson said.

By May 15, census workers will begin knocking on the doors of people who have yet to respond.

For the first time in its history, the Census Bureau will allow people to fill out their form online — either from their computers or their smart phones.

For late responders, Robinson said Census Bureau workers will knock on doors regardless of whether there are ‘no-trespassing’ signs on the property.

If people fail to respond after the postcards and the census-worker visits, Robinson said, “Worst-case scenario, after three tries, we’re going to reach out to your neighbors.”

Residents should include everyone in their household at the time of the census count, Robinson said, noting that children and relatives staying in the home should be counted on the census.

College students typically should be counted at their campuses, “because that’s where they live and sleep,” Robinson added.

Because of its rural nature, northern Arizona tends to be undercounted, Robinson said.

She fielded a number of questions from the audience, including how the census would count people who are experiencing homelessness. “We’re going to reach out to shelters and go out personally to identify where we can find these people,” she said.

Robinson emphasized that the Census Bureau is looking for employees interested in helping with the census in Prescott, at an hourly rate of about $16.50. Information is available on the census website at: https://2020census.gov/en/jobs.

The public likely will begin seeing the results of the 2020 Census by about April or May 2021, Robinson said.

Editorial: Why the 2020 census is so important to the Prescott area
Avoid a knock on your door, respond to Census early, officials say
How to spot a fake census worker or census scam
Editorial: How residents can protect themselves from a fake census worker
2020 Census to be printed without citizenship question