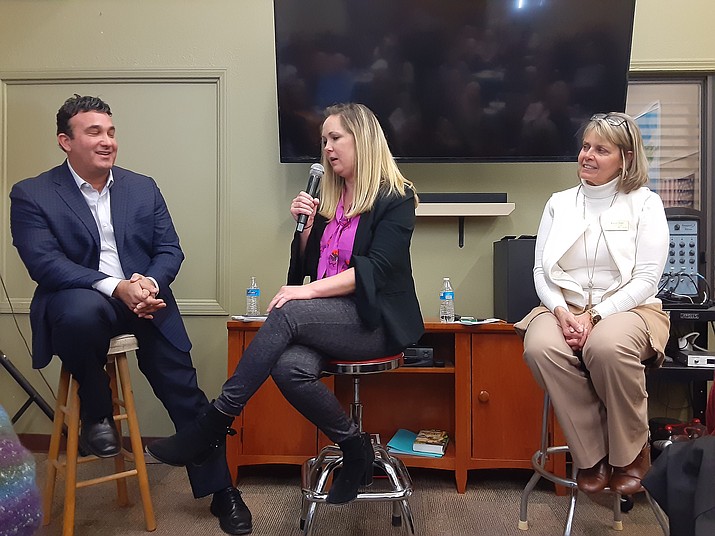 Some California companies have been looking heavily into Chino Valley, Tidaback said, mentioning one coming that is poised to bring 80 jobs to the area.

That is an example of a partnership between a broker and economic development, Tidaback said.

When it comes to what businesses that come to Chino Valley to investigate whether or not they should start up or relocate, Tidaback said they look for the availability of buildings and land as well as the quality of life. They also look for a trained and skilled workforce, Jones said.

“Part of what we do at the college is find out what the gaps are, talk to employers,” she said. “We recently talked to an employer that was coming out and needs some technology-skilled workforce. So how can they fill that gap, what programs can they put together to train workforce so that they would have what they need?”

Visibility and price per square foot is also important for businesses, Zogob said. That’s what Chino Valley has going for it, he said. There’s a lot of corridor to work with and the town has a good price point compared to other options in Yavapai County.

The question arose as to if there are any plans for the youth of Chino Valley. Tidaback said she puts polls out on social media and high schoolers are asking for a bowling alley. It’s something there’s space for and she’s been working on a way to get one in town, she said. She also brought up the possibility of a drive-in movie theater and Zogob spoke of a preschool-type operation.

“Child care is underserved in the community,” he said. “Maybe get something here in the next six months or so.”

Looking at economic development priorities, Tidaback said her long term goals are future growth along highway 89 and getting more retailers, office space and jobs into town. Chino Valley loses about half of its workforce to Prescott and creating jobs as well as services that people need like medical facilities would keep people in town, she said.

In the short term, Tidaback said her priorities are the business park at Old Home Manor and getting jobs there, chasing a grocer and tourism, an endeavor she is starting this fiscal year.

“Tourism matters,” she said. “You would not believe how many dollars it brings and they leave. They come and leave. So that’s always good.”