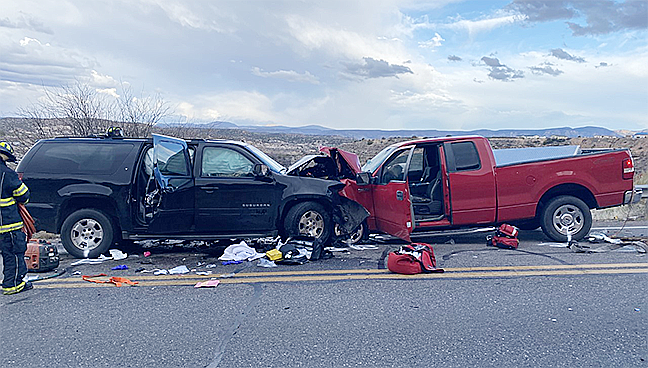 Two vehicles hit head on along Cornville Road on Monday, Feb. 10, 2020. A child and both drivers were seriously injured. (YCSO/Courtesy)

A child and the drivers of two vehicles were seriously injured in a collision Monday, Feb. 10, on Cornville Road.

A 5-year-old child in the Suburban - the daughter of that driver - was in a normal seat instead of a child seat and was seriously injured, according to a news release. Fire personnel from Verde Valley Fire and Copper Canyon Fire had to use hydraulic tools to remove the occupants from both vehicles.

The child was transported to the Verde Valley Medical Center with CPR underway, stabilized and then flown to Phoenix Children’s Hospital with apparent internal bleeding. Both drivers were flown to Flagstaff Medical Center in serious condition with multiple injuries.

Witnesses told deputies the Suburban was weaving earlier on Cornville Road at Page Springs Road and crossed over the center line several times. The Suburban driver thought she had fallen asleep and admitted earlier use of pain pills and medical marijuana. Deputies located evidence of drug use in her purse along with medical marijuana prescriptions. Blood test results are pending.

The YCSO Serious Collision Team arrived to take over the investigation with assistance from Department of Public Safety personnel.

The drivers' identities will be released upon documented confirmation. As of Tuesday morning, there have been no updates on the condition of those involved.