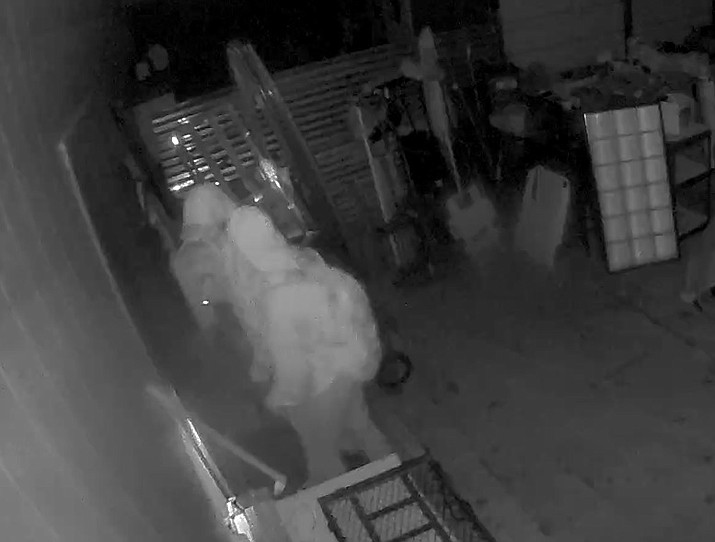 Two suspects caught on security video attempting to break into a garage in the 24000 block of Prairie Way in Paulden on Monday, Feb. 10, 2020. (YCSO/Courtesy)

Two teenage brothers from Paulden were arrested and booked into the Yavapai County Juvenile Detention Center on suspicion of committing two Paulden-area burglaries on Monday, Feb. 10.

The adolescents, ages 15 and 16, first allegedly stole their father’s truck early that morning, according to a Yavapai County Sheriff’s Office (YCSO) news release.

One of their targets was a home in the 24000 block of Prairie Way in Paulden, the release states.

A resident of the home told deputies she was awakened at 2:30 a.m. Monday by an alert on her phone indicating a security video activation. Her armed husband searched the property for trespassers, but none were found.

The security videos showed two suspects attempting to enter the garage adjacent to their home. They checked the garage and found its door unsecure and property missing, the release states.

The couple posted portions of the security video on a community Facebook page and several people identified the suspects as brothers by name. One person even commented that the brothers had bragged about stealing stereo equipment during a recent burglary.

Deputies learned the brothers attend Chino Valley High School and contacted administrators that same morning, YCSO reported. After seeing the video, the administrators recognized the two boys and invited police onto the campus to investigate further.

With their parents present, both suspects were interviewed at the school and eventually admitted to stealing their father’s truck and burglarizing the garage, YCSO reported.

Deputies returned to the home of the suspects and recovered a stolen stereo, which had been stashed in a bush. Additional stolen items, including knives and jewelry, were also recovered from the home.

During the investigation, another deputy was assigned to a burglary that occurred in the 22000 block of Stump Road in Paulden.

A neighbor, who was watching the unoccupied property for the homeowner, noticed a broken window and found the house ransacked and a TV missing, YCSO reported. However, it was unknown when the theft occurred.

While the deputy was working on his report at a YCSO substation, he spoke to the deputy handling the Prairie Way burglary.

Because both incidents were within 2 blocks of each other, the deputy decided to interview the two suspect brothers already in custody. Both eventually admitted to burglarizing the home the same morning and stealing a TV and jewelry.

Deputies returned to the home of the suspects and recovered a stolen 47-inch TV that was hidden in a closet. The jewelry has not been located.

The brothers both currently face two charges of burglary and one charge of vehicle theft.

If anyone in the Paulden area around the two burglarized locations has noticed items missing from their property, they are encouraged to contact the YCSO at 928-771-3260 for follow-up.