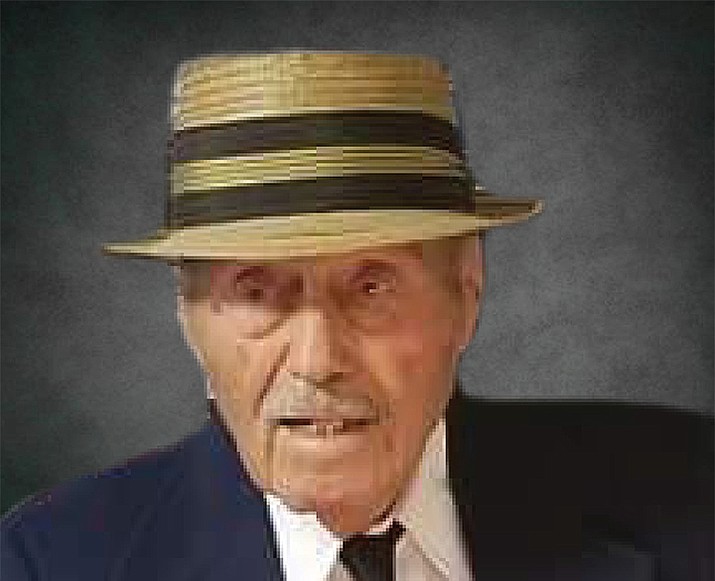 Joe was educated in Seligman and excelled in track, where he was one of the fastest runners, graduating in 1940. After completing high school, he worked for Mrs. Nile at her service station and then went to work for the Santa Fe Railroad. In 1942, he was drafted into the Army serving during World War II in France and Germany. After the war ended, Joe was stationed in Marfa, Texas where he met his bride to be, Polly Mendias. They were married on August 24, 1947 soon after moving to Seligman where they raised two children.

Joe continued working for the Santa Fe Railroad for 21 years. While working for the railroad, he and a business partner purchased the Atlantic Richfield Service Station. He continued employment at the railroad and simultaneously managed the service station. After some years he bought out his partner and left the railroad. Joe and Polly ran the station and grocery store for 29 years. Not long after they retired, they purchased and managed the Canyon Shadows Motel for many years.

Joe loved music and at a young age taught himself how to play the guitar, where he excelled and became an accomplished musician. He and his brothers formed the Delgadillo Orchestra in 1939. They played at numerous events throughout Arizona. Joe continued playing in the band and writing music until the time of his death.

He was able to fix anything and build the parts to do it. He was dedicated to the community and helping others. He was very instrumental in building the Seligman Health Clinic and the current Catholic Church. Joe had an intellectual and memory that never would quit. Joe is survived by his children, Ernie Delgadillo and wife, Patty of Boise, Idaho and Anna Marie Gorman and husband, Rick of Seligman; four grandchildren, Jason and Melissa Delgadillo and Joseph and Vanessa Gorman and five great-grandchildren. Joe was preceded in death by the love of his life, Polly, infant son, parents, grandson, Jason, and several siblings. He is survived by two brothers, Augustine and Angel and one sister, Luz Moore.

Joe will be sorely missed and lovingly remembered for his witty personality, tenacity, resourcefulness and community leadership. He loved people and would make his rounds daily to visit people in the community.

Funeral Arrangements entrusted to Ruffner-Wakelin Funeral Home. At Joe’s request, no services will be held. Please log on to www.ruffnerwakelin.com to sign Joe’s guestbook and share a memory with the family.