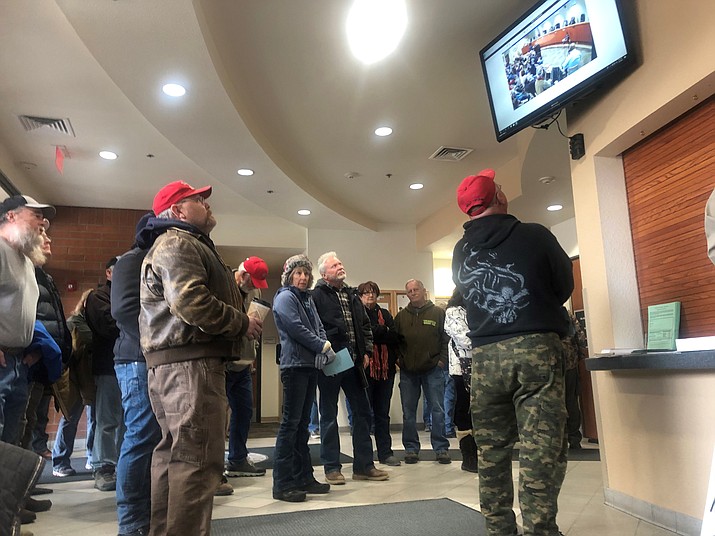 The crowd at the Yavapai County Board of Supervisors’ meeting overflowed into the lobby of the County Administration Building Wednesday, Feb. 5. (Cindy Barks/Courier)

It is already in the U.S. Constitution, and now Yavapai County has doubled down on the Second Amendment’s protection of the right to bear arms.

About 120 people packed the supervisors’ meeting room in Prescott, and another 50 or so filled the lobby. In all, 25 people spoke in favor of the sanctuary resolution, and three spoke against.

All five of the Yavapai County Supervisors voiced support for a Second Amendment Sanctuary County resolution.

This week’s meeting came after a Jan. 2 meeting at which about 500 people showed up, many of whom urged the county to follow the lead of Mojave County in declaring a Second Amendment Sanctuary County.

The Yavapai County resolution states that the board commits to “stand and defend their rights and liberties as guaranteed by the United States Constitution and laws of the State of Arizona.”

It adds that the county would not authorize “government funds, resources, employees, agencies, contractors, buildings, detention centers or officers for the purpose of enforcing laws that unconstitutionally infringe on the people’s right to keep and bear arms.”

Board Chairman Craig Brown led off the discussion by noting that the board would make a motion and discuss the resolution before opening the discussion up to the public. He added that the public comments would be limited to one hour.

With little discussion from the board, Supervisor Tom Thurman said, “I happily make the motion to approve,” and Supervisor Rowle Simmons seconded the motion.

Many of the people who spoke maintained that laws in other states had infringed on the rights of gun owners. They urged Yavapai County to take a stand against such laws in Arizona.

Prescott resident Sherrie Hanna told the supervisors, “We have to ask ourselves — what led us here today? We are here because the governor and lawmakers of Virginia held up their right hand swearing to uphold the Constitution of the United States and then turned around and approved seven new gun control bills infringing on the rights of law-abiding Virginia gun owners.” 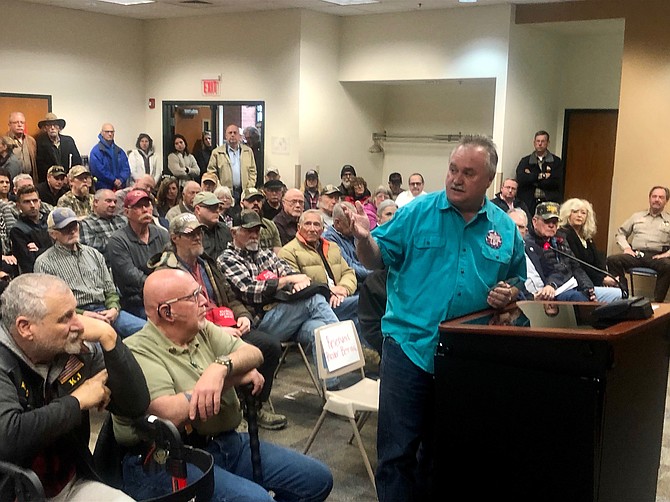 She added, “We see this type of total disregard for our Second Amendment rights under attack. This is about our rights, protecting our freedoms and liberty.”

Local resident Chris Kuknyo — while allowing that “a resolution has no teeth” — maintained that “what it does do is it sends a message to our governor and other people that we won’t tolerate it, and we will fight against it.”

Anne Marie Ward told the board, “As a woman, I feel the comfort of the weight of a Sig (gun) on my hip when I travel. I know it keeps me safe from what could go wrong.”

Ward said that even though “we’ve argued and seen in this room that this initiative might not have enough weight or teeth, what this is is the voice of the people saying ‘It’s the beginning — not only of opposing red-flag laws, but it’s time to start moving forward as a unified people to repeal laws that have been put on our gun rights.’”

Still, others at the meeting argued that the resolution was largely redundant because the Second Amendment already protects the right to bear arms.

Prescott resident Ralph Hess, a retired Superior Court judge, said several questions had arisen when he read the resolution. First, he asked, “Why are you considering this proposed resolution? Isn’t it unnecessary?”

He also questioned the constitutionality of the resolution’s pledge not to allocate county money for enforcing laws that unconstitutionally infringe on the right to bear arms.

“As you know, constitutionality of laws is determined by courts, not by boards of supervisors, not by county attorneys, not by county sheriffs and not by Second Amendment ‘sanctuary county’ advocates,” Hess said. “Until a court determines a law to be unconstitutional, your oaths bind you to authorize or appropriate the use of county resources for the purpose of enforcing that law.”

Several members of the audience urged the county to take an even stronger stand in the future by approving an ordinance that they said would be more binding.

Speaker Mark E. Smith told the board, “As we all know, a resolution carries no legal weight.” But, in pushing for an ordinance, he said, “This is not the end of this issue, but the beginning.”

Brown said after the meeting, however, that it was his opinion that an ordinance would be no more legally binding than a resolution. (See related story.)