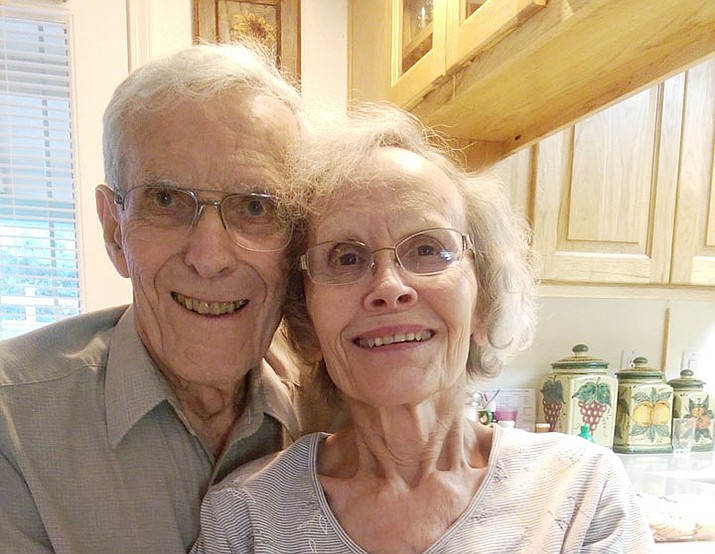 Joseph “Joe” Tomasic and Patricia “Ann” Tomasic of Prescott Arizona, formerly of Cleveland, Ohio, were an extraordinary couple. Married 61 years, they died within two weeks of one another. Joe passed in peace on December 14, 2019, followed by Ann on December 27, 2019. Joe was born on October 10, 1928 in Pittsburgh, Penn. to Philip and Antonia (Ribarich) Tomasic, who immigrated to the United States from Croatia. Joe graduated from Scott High School in 1946 and was honorably discharged from the United States Air Force in 1949. He went on to study at the Pittsburgh Institute of Aeronautics before starting his career as an airline mechanic at United Airlines in Cleveland.

Ann was born in Coshocton, Ohio in 1936 to Edgar Day and Anna (Reese) Stanton. Her father was a marine “devil-dog” in WWI, who became a plumber and her mother was a cook who ran the school cafeteria. Ann graduated from Coshocton High School in 1954 and eventually made her way to the “big city” of Cleveland for a job at United Airlines where she met Joe.

Ann and Joe were married on October 25, 1958 at Sacred Heart Catholic Church in Coshocton, Ohio. After moving to Columbia Station, the couple welcomed four children into their home; Michael, Beth, Philip, and Mark. Ann and Joe’s children remember them as kind, non-judgmental, devoted, funny and forgiving parents. The couple were blessed with seven grandchildren; Nathan, Keith, Sarah, David (Lemcke) and Eli, Ruby, and Christopher (Tomasic).

For his entire life, Joe was passionate about airplanes and flying. He was an airline mechanic for United Airlines for 40 years as well as a private pilot (Joe wooed Ann by taking her for rides in his Aeronca Champ). In addition to his incredible mechanical skills (Joe could fix anything), he was also a creative and accomplished painter who specialized in aviation art. Joe was generous with his time and talent, volunteering at St. Vincent de Paul Society Thrift Shop where he fixed broken items and donating paintings for Big Brothers and Big Sisters fundraisers in Prescott.

Ann was the spitfire to Joe’s calm reserve. After leaving United Airlines, Ann worked as a stay-at-home mom before joining the Estabrook Corporation (Berea, Ohio) as an office manager. Upon retiring, Ann and Joe moved from Columbia Station, Ohio to Prescott.

Not one to sit still for long, Ann opened her own successful pet sitting business, “Ann & Arlene’s Arc” which she ran for several years. Ann volunteered her time helping new mothers at Yavapai Regional Medical Center and teaching children about the holy sacraments at Sacred Heart Catholic Church in Prescott. A high school majorette and homecoming queen, Ann enjoyed twirling her baton, singing, and dancing for friends and family who came to visit her through her final days.

Joe and Ann were great friends to many, loved animals and nature, and would often gather their family at sunset to appreciate the beautiful Ohio sky. They were active and dedicated members of Sacred Heart Catholic Church, St. Elizabeth Ann Seton Catholic Church (Columbia Station, Ohio) and St. Mary of the Falls (Olmsted Falls, Ohio).

The couple are survived by their children, grandchildren and beloved nieces and nephews. Additionally, Ann is survived by her brother, Milton “Mac” Stanton.

The family would like to thank Kindred Hospice for their care and dedication and Ann and Joe’s many close friends who supported them and their family in the last several years of their lives.