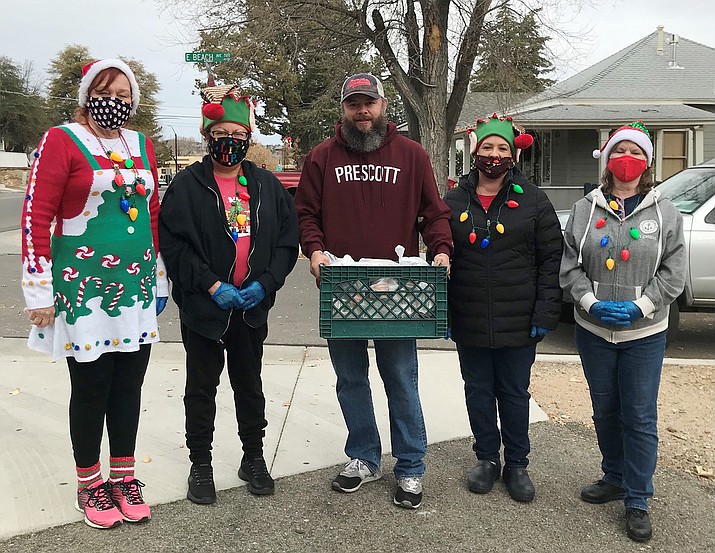 About a month ago, Brian Randal was talking on the phone with his younger sister, Karen, when the conversation turned to how the Colorado school district where Karen teaches provides free meals to children and their families in need while they are at home during the pandemic.

Under normal circumstances, the children would be fed breakfast and lunch at school. But with remote online learning in place, how would they get that food?

After hanging up the phone, Randal, who works at Leap of Faith Tattoo in Prescott, wondered how less fortunate children and families in the Prescott Unified School District were faring in this regard.

He later learned that Lincoln Elementary School, 201 Park Ave. – no more than a few blocks from where he works – was distributing meals on most days, as was Prescott High School several miles away on Ruth Street.

Although his children are grown, Randal seemed compelled to help those in need here.

And so he met with the lunch ladies at Lincoln and asked if he could start delivering food to the children and families who they serve in and around downtown Prescott. The ladies enthusiastically obliged.

Now, Randal picks up food from Lincoln five days a week in the late mornings and spends two-plus hours delivering meals in the city. After he finishes filling the back of his truck with the food the lunch ladies give him, he drives off down Lincoln Avenue to start his route.

Randal, who has lived in Prescott for more than 20 years, has found a new passion.

“I get excited when my alarm goes off,” said Randal, referring to his reminder to pick up the food from Lincoln. “I bring my service dog with me and we head out.”

During this experience, Randal developed a newfound respect and appreciation for Lincoln’s lunch ladies. He talks about their deep commitment to the children and families they serve – and their enduringly happy, smiling faces, no matter the circumstances.

“They do such a good job,” he added. “When it’s freezing cold and 19 degrees outside, the ladies are out there on the curb [next to the school to distribute the food].”

This past week, Lincoln School was closed. No matter for Randal, though. He hopped in his truck and headed over to Prescott High School, which had meals available for distribution and pickup.

Randal follows the Norman Vincent Peale phrase, “Find a need and fill it.”

“This was not an intentional thing,” Randal added.

Randal says almost all of the meals he typically delivers are contactless with the exception of one family. Families leave coolers outside their homes and Randal fills them.

On Fridays, meals are packed for the weekends. Each family typically receives three breakfasts, three lunches, snacks and fruit, among other items. This past Wednesday, Randal was rather busy, delivering 63 meals because of the forthcoming Christmas Eve and Christmas holidays.

He said that he would be back at it on Monday, though. Randal added that he wishes more people in the community would join in on the effort.

“I’m going to keep doing it as long as the kids are not in school,” Randal said. “If I have the time and the means to do it, why not help out?”