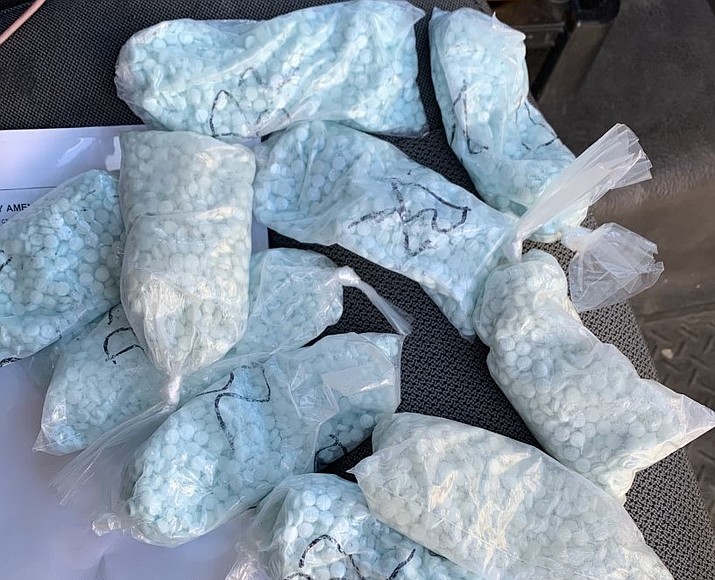 Inside the cab of a truck, a K9 deputy found a fast-food bag that contained two separate bags, which held 10 individual baggies of blue M30 pills, presumptive for fentanyl. The arrests were the result of the Yavapai County Sheriff's Office patrol efforts. (YCSO/Courtesy)

A Dec. 2 traffic stop on Interstate 17 for equipment and moving violations resulted in arrests of two Phoenix men for transportation and possession for sale of about 10,000 pills, presumptive for fentanyl. 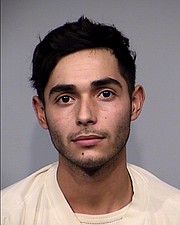 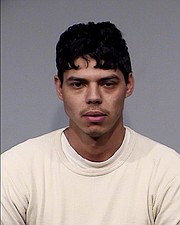 A news release from the Yavapai County Sheriff’s Office (YCSO) states that at about 11:45 a.m. Dec. 2, a YCSO K9 deputy stopped a Ford F-150 pick-up truck on I-17 near Cordes Junction for several equipment violations, as well as a moving violation.

During a conversation with the two occupants – the driver, Leon Carlos-Uriel, 23, and his passenger, 20-year-old Brayan Contreras Angulo – the deputy reportedly “detected deceptive answers to questions, and based on his training and experience, determined they were likely involved in criminal activity,” stated the news release.

Although receiving consent to search the truck from Leon, the deputy deployed his certified K9 dog for a free air sniff around the truck. After receiving a K9 alert, a search for the source of the illicit odor was conducted, said the release.

Inside the cab of the truck, the deputy found a McDonald’s bag behind a set of speakers. “Contained within this bag were two separate bags which held 10 individual baggies of blue M30 pills, presumptive for fentanyl,” the release added.

Leon reportedly admitted knowing about the bag/package, but not the contents, and he claimed he was transporting the package to unknown persons in the Camp Verde area.

Detectives from the Partners Against Narcotics Trafficking task force (PANT) are investigating and have not disclosed further details at this time.