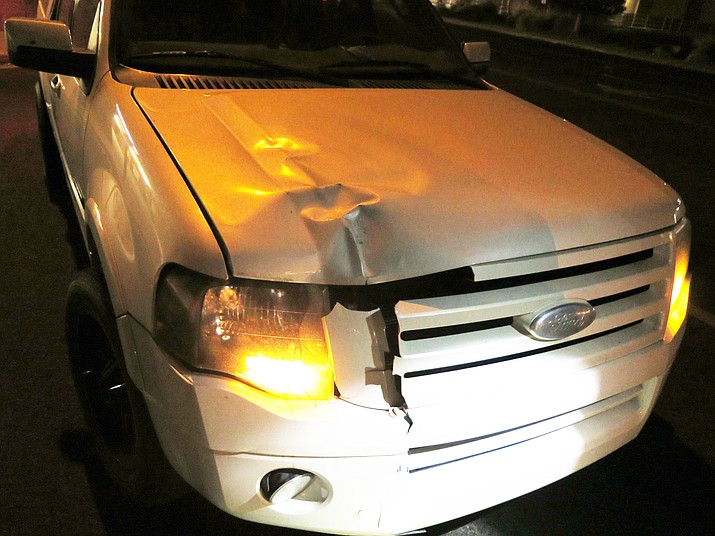 The damage is shown on a 2008 Ford Expedition after a Prescott driver hit Wendy Dodge, 56, while she crossed Willow Creek Road in Prescott without using a crosswalk Saturday, Dec. 5, 2020, Prescott Police said. Dodge was pronounced dead at Yavapai Regional Medical Center on Saturday night. (Prescott PD/Courtesy)

A 56-year-old Prescott woman died on Saturday night when a man driving a Ford Expedition hit her as she walked outside of the crosswalk on Willow Creek Road near Yavapai Regional Medical Center, Prescott police stated in a news release on Monday.

Police say Wendy Dodge was trying to cross Willow Creek Road eastbound toward the hospital when she was struck and killed.

The man, a 35-year-old from Prescott, was driving northbound in the 1000 block of Willow Creek Road when he struck Dodge with his 2008 model Expedition, police said.

At about 7:37 p.m. Saturday, police responded to the scene. Investigators say they determined that based on evidence at the scene Dodge was not using a dedicated crosswalk as she crossed the street.

Next of kin has been notified.

Willow Creek Road was closed for more than four hours while emergency medical personnel and members of the Prescott Police Traffic Safety Section worked the scene, the release stated. The roadway reopened just before midnight.

The Traffic Safety Section added in the release that it will continue to investigate the scene of the collision and the evidence gathered there to determine the cause and the contributing factors that may have played a role in it.