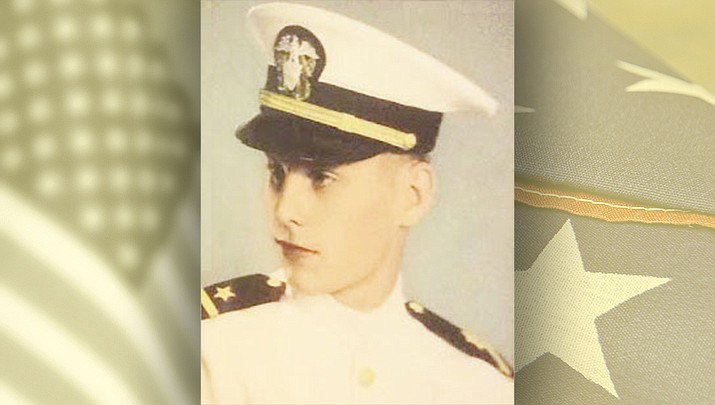 Eugene Gerhard Pereboom was born April 19, 1925, in Hawarden, Iowa, to Gerhard Fredrieck and Edna Alvida Johnson Pereboom and went home to be with the LORD, and his wife, Erie Elaine Webber Pereboom, on July 25, 2020, in Prescott, Arizona.

Services will be announced at a later date, and interment will be with his wife at the Prescott National Cemetery.

Gene was the third of three children and the last of his siblings to pass. His father died at the age of 89 in Blackwell, Oklahoma. His mother died at the age of 80 in their home Blackwell. Both his parents were buried in Enid, Oklahoma, Cemetery. He graduated from high school in Helena, Oklahoma. He worked in Hague Hardware Store all during his high school years. He loved sports and played baseball and basketball.

When Gene was 2 years old, his parents moved the family to northern Oklahoma due to the cold weather on the northwest Iowa farm where they were living. His father accepted a position in Helena, Oklahoma, as manager for the farmers’ grain elevators. He was confirmed in the Lutheran Church April 24, 1938, at the age of 13. His confirmation verse was “But he who stands firm to the end will be saved.” — Matthew 24: 13

Gene attended American Lutheran Church, 1085 Scott Drive, Prescott, Arizona 86301. He led his family in faith and wanted salvation for them and their families above all else.

Gene enjoyed working at the hardware store while he was in school at Helena. He also enjoyed sports and played baseball and basketball all of his high school years. In high school, he took an exam given by the U.S. Navy and passed. He was entered into a V-12 unit at Oklahoma University on June 1, 1943, he was enlisted and studied at OU, University of Texas at Arlington and Columbia University, NY. He became an officer in the Navy and a World War II veteran. He understood that he was on his way to Miami, Florida, to take command of a small vessel that would sail into Tokyo Bay. Fortunately, the war ended in Europe and Japan just after he earned his rank and he was sent to Advance Training School at Ft. Schuyler, NY. He was assigned to Saipan in the Pacific. Upon his discharge from the Navy on Aug. 2, 1946, after three years and two months of service, he entered the University of Oklahoma, graduating in 1948 with a degree in Electrical Engineering.

Gene was earning his Master’s Degree at OU and Elaine worked at the University Press where they lived in student housing. After graduating with a Master’s Degree, jobs were not available so the couple moved to Texas where Gene got a job teaching drafting. When a friend told him about a job in electrical engineering, they moved to Tulsa, Oklahoma, where Gene started work with Southwest Power Association in 1949. Tulsa also brought the first of three boys, Douglass Eugene born April 23, 1950. Soon after, Gene accepted a position with Westinghouse in Baltimore, Maryland, where Victor Ross was born Feb. 8, 1952. Continuing with Westinghouse, they moved to St. Louis, Missouri, and then on to Merriam, Kansas, where the family grew again when Gregg Alan was born Dec. 1, 1955.

Gene loved to work with wood. While in Overland Park, he built a bedroom suite of oak in a cowboy motif that is still being used today by his great-grandchildren after being passed down from family to family. He was a precise builder and while in Chickasha, he helped build a beautiful new altar, pulpit and all the related objects needed for worship.

They enjoyed 10 years in Overland Park, Kansas, when an offer from Western Farmers Electric Coop headquartered in Anadarko, Oklahoma, came to Gene and he took his family to Chickasha, Oklahoma. Within three years, Gene was offered a position in Southern California. Southern California Edison was a great step forward for Gene and the family went to Los Alamitos to live. Several years later, a chance to move back to where family was, came from Springfield, Missouri and Gene accepted it. Bechtel Power Corporation then offered him a position which took them back to Southern California and later to Houston. Houston was closer to the family’s roots.

Gene finally retired from Bechtel Power Corporation but not from working hard. He joined Elaine in her business selling life insurance for Aid Association for Lutherans out of the Houston office. She served her territories for over 15 years with his support. They retired to Prescott, Arizona, Nov. 30, 1990. Gene remained very engaged with his family and in the community. They both loved to travel together and often stayed at length in West Palm Beach, Florida, with Douglass, and in Salt Lake City, Utah, with Gregg, and their families.

Eugene Gerhard Pereboom, the last of his generation and a member of that “Greatest Generation,” is survived by his three sons, Douglass and wife Debi of West Palm Beach, Florida, Victor and wife Kathy of Prescott, Arizona, and Gregg and wife Shelley of Murray, Utah. His legacy includes 11 grandchildren together with their spouses, ten great-grandchildren, numerous nieces and nephews, and many friends and relatives.

The family would like to extend a special thank you to Paula Ryan and Isabel and her team at Highgate for their loving care of Gene in his final days. Arrangements entrusted to Hampton Funeral Home.