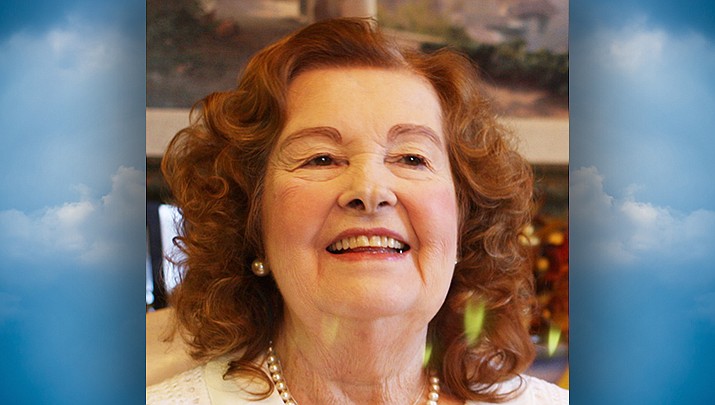 Raised and educated in Chicago, Illinois, her early experiences included voice and music lessons, pageant recognition and a national train tour as “Miss Blossomtime,” part of a festival that continues to this day, and performing with the Lyric Opera of Chicago.

Connie always had a beautiful classical soprano voice and singing was a consistent and joyful theme throughout her life. It was through her love for singing and music that she met her piano accompanist, the man who would become her future husband of more than 60 years, Leonard W. Polk. Following the birth of their daughter in 1956, the Polk family relocated to Prescott, Arizona in 1960, where their son was born in 1961.

In addition to her love for music, Connie’s passions focused on home and family. In 1966, the family moved to Scottsdale, Arizona, where over the next several decades, she worked in real estate, as an aide with the Scottsdale School District, and later with Scottsdale Insurance Company. During that time, she also earned an Associate in Arts degree from Scottsdale Community College and performed with a choral group at Arizona State University, which included performances with the Arizona Opera.

The Polks were extremely proud of their Polish heritage and in 1979 they undertook a driving tour of Poland, which provided a wealth of unique experiences and allowed them to make personal connections with extended family members.

In 1998, Connie and Leonard returned to Prescott, where they resided at Prescott Country Club. She took great pleasure in their beautiful home and yard, which served as the location of myriad happy gatherings of friends and family residing in the Prescott area and well beyond. That included the close relationship with in-laws, Eugene and Barbara Polk of Prescott and their extended family, which continued throughout Connie’s life.

The return to the Prescott area allowed Connie to participate in the Yavapai College Master Chorale, a joyful experience that extended her passion for singing. In the summer of 2007, she took part in the Master Chorale performance tour of Norway, Finland and Sweden, an experience made even more significant through sharing the tour with her sister, Kathleen Vernon of Yakima, Washington. For more than a dozen years, Connie would recount memories of their trip together with pure delight.

With her husband, Connie thoroughly enjoyed their travels to Europe, and specifically, their time in Italy held a special place in their hearts. And sharing their love for music, they enjoyed numerous Arizona Opera performances in Phoenix, as well as Phoenix Symphony concerts and Metropolitan Opera live simulcasts at Yavapai College.

Connie remained in her home at Prescott Country Club following the death of her husband in 2017, while staying in close touch with her children and grandchildren. In 2018 she moved to Prescott’s Alta Vista Senior Living Community, where she resided until recently.

A memorial service will be held at a later date. In lieu of flowers, contributions are requested for Yavapai Youth Choirs, c/o Yavapai College Foundation in Honor of Constance Polk, 1100 E. Sheldon St., Prescott, AZ 86301. Funeral Arrangements entrusted to Ruffner Wakelin Funeral Homes. Please log on to www.ruffnerwakelin.com to sign Connie’s guestbook and share a memory with the family.