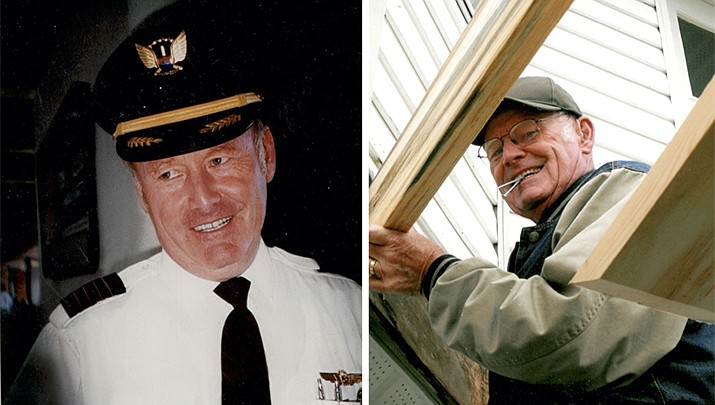 Captain Harry Perrin Osborne, 81, has flown West, peacefully passing from this life into eternal life on July 12, 2020, at his home in Prescott, Arizona. He was born May 9, 1939 in the city of Calgary, Alberta Canada, where he grew up in the home of his parents, Henry and Dorothea Osborne.

As a young lad, Harry raised and raced pigeons, built model airplanes, and loved fly fishing. He was always industrious; he worked on cars, overhauling engines for his friends overnight in his father’s garage. He continued his love of old cars, collecting Studebakers, Lincolns, 31 Model A, 1914 Trumbull, 41 Chevy, and 41 Ford truck. He was a member of car clubs, including Prescott Antique Auto Club and Gallopin Gertie Club in Washington state.

Harry attended workshops for two summers in his early years, where he learned to become an airframe mechanic, and subsequently joined the Royal Canadian Air Force, training on the Chipmunk, Harvard, and the T33. After he got his wings, he flew the TF100 Fighter, then the F101, interceptors in the NORAD division stationed in Comox, British Columbia. Flying to Seattle often during his service, he heard United Airlines was hiring pilots. After 6 years in the RCAF, he began working for United, flying the DC8, the DC10, 737 and 747. He retired after 35 years as Captain on the 747-400 in 1999. During those years he flew his own Globe Swift everywhere.

Soon after he started working for United Airlines he received his U.S. citizenship. Besides working on old cars, he built experimental airplanes. In southern California he held the office of secretary and then president of the EAA chapter, where he inspected members’ planes and their building progress, flying some of them on their maiden voyage! After moving to Prescott he was a member of the Quiet Birdmen Prescott Hangar during which time he helped Bill for several years prepare for their Annual Hangar Party.

He built several houses and could make and repair just about anything. He loved helping people in any way he could, was the church handyman and drove the church van at Willow Hills Baptist Church. Harry was indeed an honorable gentleman.

Harry was preceded in death by his father, Henry; his mother, Dorothea; and his sister, Beverley. He is survived by his devoted loving wife and best friend of many years, Drucilla. Also, survived by children, Michael (Amy; children: Michelle, Amanda, and Joshua), Marienne (children: Courtney, David, Kameron, and Alesha), Shannon (Anthony; child: Sarah), and Sharn (children: Devin, Steffen, and Andrew); stepchildren, Stanley (Susan; child: Chad), ZoAnne (children: Matthew and Sean), and Cameron (Janie; children: Kristen and Shaun); and several great grandchildren. He leaves behind extended family and many dear friends.

The family especially appreciates the wonderful care by our personal caregivers and Solaris Hospice. Harry’s body has been donated to Research for Life, for studies of vascular dementia and Alzheimer’s disease etc.

Services will be announced at a later date.