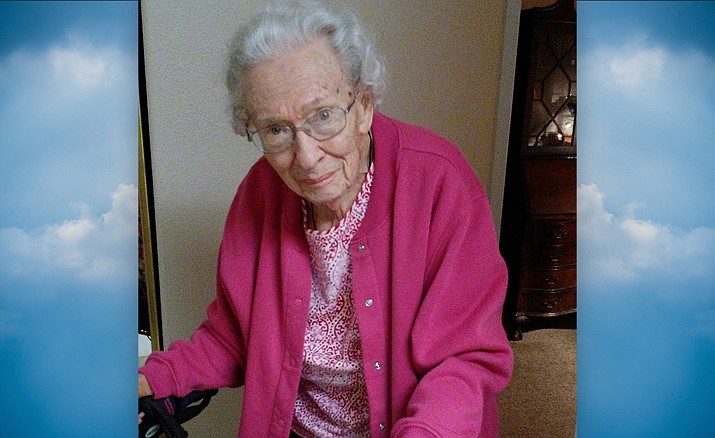 JoAnn (Palleske) Moorhead, 92, died April 18, 2020 in her home at Las Fuentes Assisted Living Resort Village, Prescott, Arizona. She passed peacefully in the presence of her youngest daughter, Elle (Lois) Hughes. She is predeceased by her husband of 62 years, Bruce W. Moorhead Sr. She is survived by her sons, Bruce Jr. (Diane) of Naples, Florida, George (Patricia) of Seattle, Washington and daughters, Sarah Moorhead of Eugene, Oregon and Elle Hughes of Prescott, as well as ten grandchildren and eight great-grandchildren. JoAnn was born on October 10, 1927 in Los Angeles, California to Milton E. and Olive (Moxley) Palleske. When JoAnn was seven her family moved to Cottage Grove, Oregon outside of Eugene and settled near her grandparent’s farm. She and her brother Ross walked through fields to the Silk Creek one room schoolhouse which contrasted with her first elementary school in central Los Angeles. She often mentioned her memory of an early spring morning in Oregon walking to school and coming upon an entire field of daffodils in full bloom. Daffodils remained her favorite flower throughout her life. JoAnn graduated from Eugene High School and went on to earn a teaching degree from Willamette University in Salem, Oregon. Throughout high school and college, she sang in numerous school and community choirs and performed regularly as a church soloist. She was a devout Christian throughout her life and was especially close to her maternal grandparents, who were Methodist furlough missionaries in North Africa at the turn of the century. JoAnn met her future husband Bruce W. Moorhead Sr. of Salem in 1950 while both were attending Willamette University. JoAnn and Bruce were married in 1951 in an early spring wedding with fresh daffodils on all the pews lining the aisle, having been donated by a local bulb farmer who had an overabundance of daffodils in bloom. They began married life as an Air Force couple, living in Biloxi, Mississippi and Waco, Texas. After her husband’s tour of duty in Japan they continued to live in Waco while he completed his degree at Baylor University. JoAnn and Bruce eventually returned to Oregon and settled in Lebanon to raise their four children and teach in the public schools. JoAnn taught at Crowfoot elementary school and was active in the Crowfoot Baptist Church. In 1969 they moved their family to Yuma, Arizona to provide lay support at Valley Baptist Church, and they taught in public schools there until their retirement. JoAnn taught at Pecan Grove Elementary School in Yuma and Somerton School District in Somerton, Arizona in bi-lingual early grades classrooms. In her retirement she cared for her three grandchildren in Yuma, began quilting and continued her love of reading. In 2010 JoAnn and Bruce moved to Prescott to be near family. JoAnn made many dear friends among the residents and staff in her 10 years at Las Fuentes Resort Village. She was known throughout her life for her care and concern for others, her ready smile and her lifelong Christian faith. JoAnn requested cremation and interment will be private. The family asks that in lieu of flowers, interested individuals consider a donation to The American Daffodil Society, Pacific Region, or The Humane Society of the United States, which she supported throughout her life.