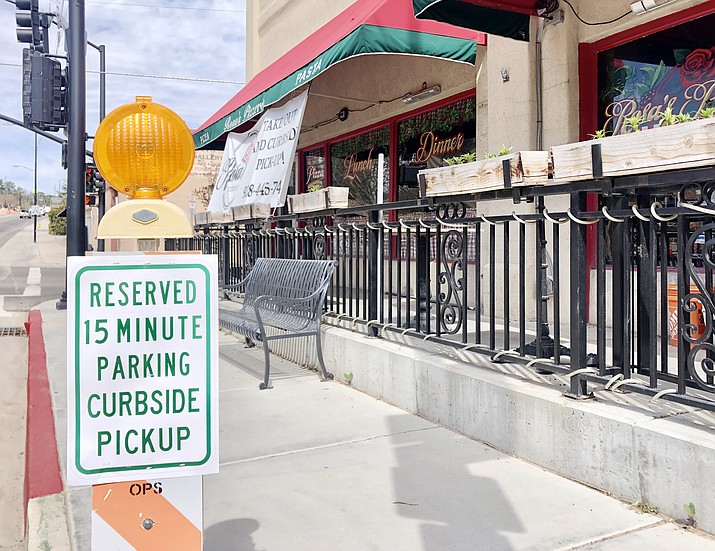 Rosa’s Pizzeria in downtown Prescott has put up signs that reserve parking spaces for curbside pickups, as well as a banner that alerts customers to the takeout and curbside services currently being offered. (Cindy Barks/Courier)

With Prescott’s eateries largely closed to inside dining because of the ongoing threat of COVID-19, many establishments have moved to takeout and curbside service.

And because of a recent city moratorium on temporary sign restrictions, restaurants can get creative on how to get the word out about their changing offerings.

From banners fluttering above entranceways to curbside signs alerting customers to where to park for pick-up, a number of local restaurants are taking advantage of the moratorium.

In a unanimous vote on April 14, the Prescott City Council formalized the announcement that City Manager Michael Lamar made on March 27 about a moratorium on the city’s temporary sign code provisions.

The original step was taken as an effort to give local business owners more flexibility to get the word out about changes during the COVID pandemic.

At the April 14 meeting, council members voiced support for the moratorium. “It’s a small thing we can do to let businesses know we support them,” said Councilman Phil Goode.

As a part of the original March announcement, the city urged business owners who are in need of ideas or assistance developing temporary signs to contact Sales and Marketing Coordinator Ann Steward at ann.steward@prescott-az.gov.

Prescott Community Outreach Manager John Heiney said this past week that the city has since received several inquiries about the temporary signs. 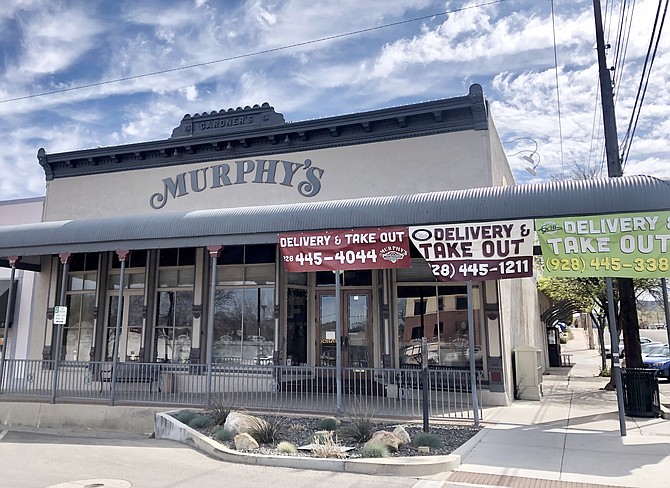 Banners are in place at the entrance to Murphy’s Restaurant on Cortez Street in downtown Prescott to alert customers about the delivery and take-out service that is currently being offered. The City of Prescott recently placed a moratorium on enforcement of its temporary sign code, which gives businesses more flexibility to get the word out about changes brought on by the COVID-19 threat. (Cindy Barks/Courier)