5 arrested on drug charges, including heroin and fentanyl 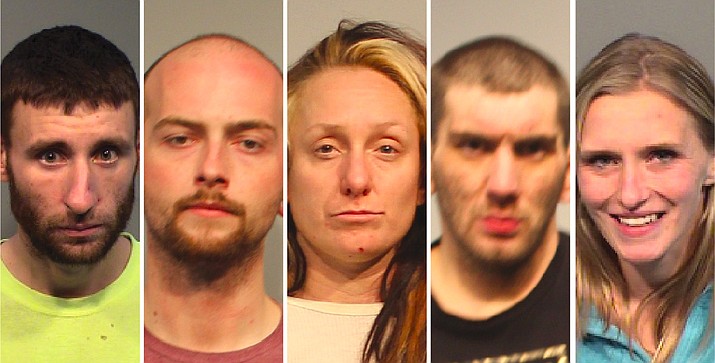 Hammel remains in the Camp Verde Detention Center on a $20,000 bond.

On April 6, YCSO deputies say medical staff at YRMC reported to Prescott police that, while removing Hammel’s clothing and shoes, they found heroin, methamphetamine, and Xanax pills possibly containing fentanyl on his person.

After detectives arrived at the hospital, they learned that Wilkes, Hammel’s girlfriend, had dropped him off at the emergency room and left before returning a short time later.

Deputies say Hammel gave detectives consent to check his cell phone, which, they add, had numerous text messages related to buying and selling a large amount of illegal drugs. Deputies learned that Hammel and Wilkes lived in an apartment on the 700 block of Second Street in Prescott.

Detectives say they spoke with Wilkes, who admitted to dropping off Hammel at the hospital and leaving with a black “bag of drugs” that she had intended to “throw away.”

Detectives added that a consent check of Wilkes’ cell phone also revealed her involvement in buying and selling illegal drugs.

Based on their ongoing investigation, detectives say they sought and secured a search warrant for the Second Street apartment.

During service of the warrant, detectives added that they found numerous items, including nearly 1 ounce of black-tar heroin packaged for sales, along with quantities of meth, fentanyl, and marijuana.

Wilkes remains in the Camp Verde Detention Center on a $5,000 bond.

YCSO deputies later arrested Prescott Valley resident Alex Klingensmith on three charges, including possession of a narcotic drug for sale, possession or use of a dangerous drug, and possession of drug paraphernalia.

He was tied to the case and is being held without bond at Camp Verde Detention Center.

Deputies also charged Sheali Mandik with possession of a narcotic drug for sale, possession or use of a dangerous drug, and possession of drug paraphernalia. YCSO is holding Mandik on a $2,500 bond.

The fifth suspect, Aaron Mauger, was charged with possession or use of a dangerous drug and possession of drug paraphernalia.

YCSO deputies arrested Wilkes the afternoon of April 6, and Hammel on April 7, after treatment. Detectives say that a test for fentanyl involving the tablets was positive.

They added that the information from the cell phones led to a possible heroin dealer, 24-year-old Klingensmith, who was living in the 3400 block of North Dale Drive in Prescott Valley. Klingensmith is on active probation.

On April 9, PANT detectives served a search warrant at the North Dale Drive home. They detained Klingensmith as well as Mauger, 29, and Mandik, 30.

Detectives added that they also found several items of drug paraphernalia throughout the home and evidence of meth residue. This included pipes, mirrors and credit cards, they say, and more than 2 grams of heroin.

Klingensmith and Mandik, detectives add, claimed that Mauger provided the heroin. Mauger denied the accusation, detectives added, while admitting that he was a meth user and owned one of the mirrors with meth residue. Mauger is also on active probation.