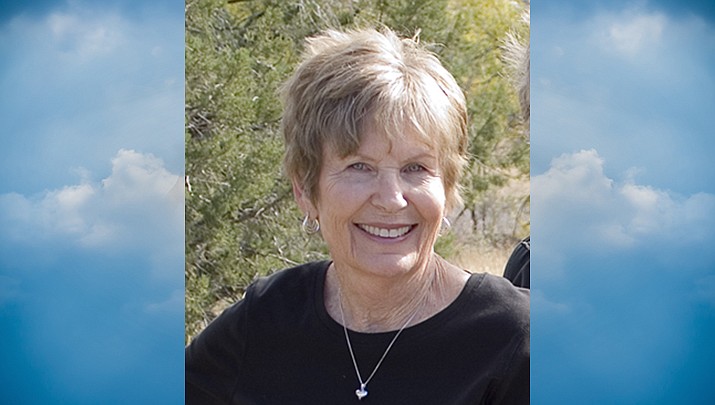 Constance Lee Gummeson, age 82, passed from this earth on April 7, 2020, in Prescott, Arizona. Connie was born in Jacksonville, Ill. to John and Florence Mullenix. As a small child, she and her mother relocated to Southern California. She was an only child until her mother remarried and, in her teens, Connie became big sister to Nancy and Mary.

Connie was personable and outgoing and was a cheerleader for La Puente High. While still in high school, Connie met Don, who quickly became the love of her life and the two were married in 1956, followed by three children. Don was a meat-cutter and he and Connie raised the children in the business.

In the 1960s, Connie and Don discovered Puertecitos, Baja California and fell in love with the fishing camp, taking their family there every school vacation. Later, they opted for early retirement to snowbird in Puertecitos. Connie belonged to the quilting club and led ladies Bible studies in the community center. They loved the Mexican people and helped to build a small church in the camp. Throughout the years, they had many adventures, including driving their Baja bug to the tip of the peninsula and back. They also introduced their grandchildren to the wonders of the region. In 1992, Connie chronicled their Mexico years in a book entitled “50 Years on the Baja.”

Connie would say the most significant event of her life was when she and Don came to faith in Christ in 1970. Above all else, she would want to be remembered as a Bible-believing Christ-follower. Her faith was evident in her life and we believe that the moment she faced her savior, He said, “Well done, thou good and faithful servant.” Connie and Don’s entire life turned around at this point, beginning with a 6-week cross-country family motorhome trip, culminating in the couple deciding to leave California. In 1971, they quickly sold their business and house and headed for the small town of Prescott, population 13,000. In 1973, they cautiously opened Don’s Meats, not knowing if the town would support them. Those doubts were quickly allayed with an overwhelmingly successful opening.

Connie, an amateur dancer, violinist and pianist, always loved performing and belonged on stage. In her 50s, she joined Lynx Creek Cloggers and, with a passion, performed with the group for 20 years. She made long-lasting friendships during that time. Throughout her life, Connie loved hosting friends and family in her home and she never hesitated to serve and encourage others.

Connie will be remembered for being a loving wife and mother and for her gentle care of Don. Her servant’s heart and patience were never-ending and always inspiring. Connie is survived by her husband, Don; daughters, Julie Griggs (Steve) and Janice Snyder (Steve); son, Jimmy Gummeson; grandchildren, Carrie (Daniel) Beal, Christopher (Rhea) Griggs, Lisa Hollingsworth, and Joshua (Lizzie) Snyder; 11 great-grandchildren; sisters, Nancy (Don) Estephan and Mary Kimball; and numerous nieces and nephews.

A memorial celebrating Connie’s life will be held at a later date. Funeral Arrangements entrusted to Ruffner Wakelin Funeral Homes. Please log on to www.ruffnerwakelin.com to sign Connie’s guestbook and share a memory with the family.