El Gato Azul, other businesses work to feed those in need during COVID-19 crisis
From fine dining to ‘Community Gives’ 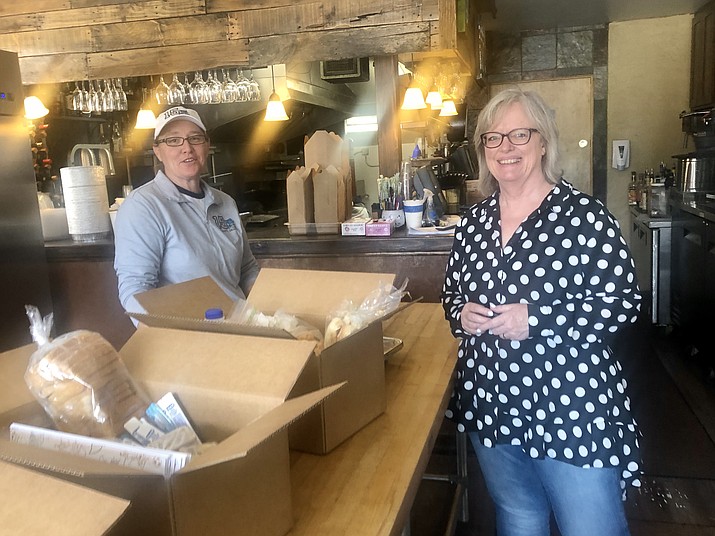 On a normal warm April day, El Gato Azul’s creekside patio would typically be filled to overflowing with a buzzing lunchtime crowd.

This year, though, in place of the tables holding tapas and wine glasses are racks stacked high with boxes of dried beans, breakfast cereal, and rolls of toilet paper.

In the shadow of the coronavirus (COVID-19) threat, El Gato owner Barry Barbe and his staff have pivoted largely from fine dining to feeding those in need. 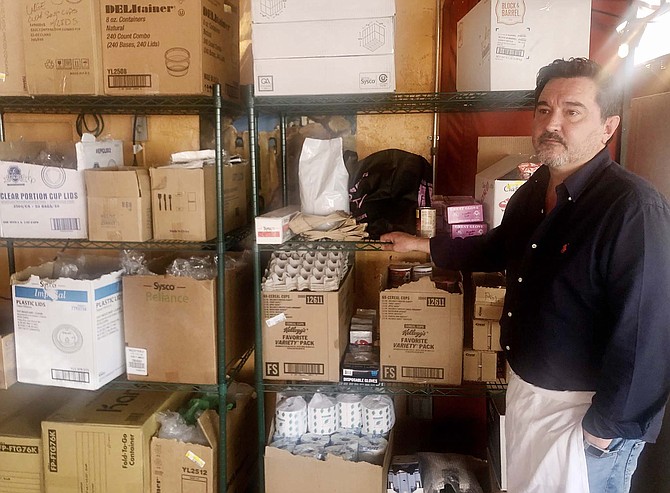 The Gato Community Gives program was launched in late March, offering no-cost meals to people who might need assistance.

While El Gato, like many other area eateries, continues to function as a restaurant offering takeout family-style fare in the evenings, the downtown-Prescott restaurant has devoted its days to filling and distributing food boxes for people who have been affected by virus-related layoffs and school closures.

“This is the most satisfying and humbling thing I’ve ever done,” Barbe said Tuesday as he surveyed the packed food pantry on his enclosed patio.

Although the long-time Prescott restaurateur is accustomed to helping with charitable causes, the ongoing pandemic led to an even deeper involvement.

“We’ve been heavily involved in the non-profit world for a long time,” Barbe said. “It’s part of our mission statement.”

But when virtually every one of El Gato’s catering jobs fell through a few weeks ago because of the virus, Barbe said the increased move toward community service was an obvious choice.

On Wednesday morning, April 8, El Gato’s crew was working to fill food boxes for Prescott Area Shelter Services, a transitional housing program. “There are three families living in one home,” Barbe explained as his staffers packed different boxes for breakfast, lunch, dinner, and snacks. Noting that the families include four adults and six children, the staff was including individual cereal boxes along with containers of eggs and yogurt and other staples.

Terri Christensen, El Gato’s general manager, said she regularly goes through the email requests for assistance, evaluating the need and the number of people in the family.

The Gato Community Gives program now has enough resources to provide upwards of 10,000 meals. Currently, about 1,000 meals a week are being distributed.

Barbe said many local businesses have offered their help, including other local restaurants and Allan’s Flowers, whose staff members are handling the deliveries.

Requests for food are being taken by email at: gcgprescott@gmail.com. More information about the program is available online at: www.elgatoazulprescott.com.

PUTTING A FACE TO IT

Once word got out about the program, Barbe said donations began flooding in.

In an informational letter, he noted that social media requests had produced enough donations to cover nearly 8,000 meals, with assurances that additional funds were available to carry the program even further.

He believes the program has helped to put a face on institutional assistance, and that it is not taking away from donations for existing charitable efforts. “My main goal is to fill the gaps,” he said.

Along with responding to the email requests, Gato Community Gives also is helping programs such as The Launch Pad, Salvation Army, Coalition for Compassion and Justice, and Prescott Area Shelter Services.

“My plan is to maintain operations for at least six months, or until the need is significantly reduced,” Barbe said. “Once El Gato is able to open on a full-time basis, operations will be moved to our off-site kitchen located on 6th Street.”

In addition to the staple and non-perishable items, the food boxes also include ready-to-eat meals that can be reheated, as well as hygiene products, including toothbrushes that were provided by Hicks Dental Group and hand sanitizer provided by the Prescott Sunrise Lions.

Labor for the program is being provided by El Gato and a roster of volunteers, Barbe said. In addition, he said, “We’ve had great support from the City of Prescott.”

Overall, he said the program has thrived because of the widespread community support.

“A lot of people have really stepped up,” Barbe said. “This is a really nice community effort.” 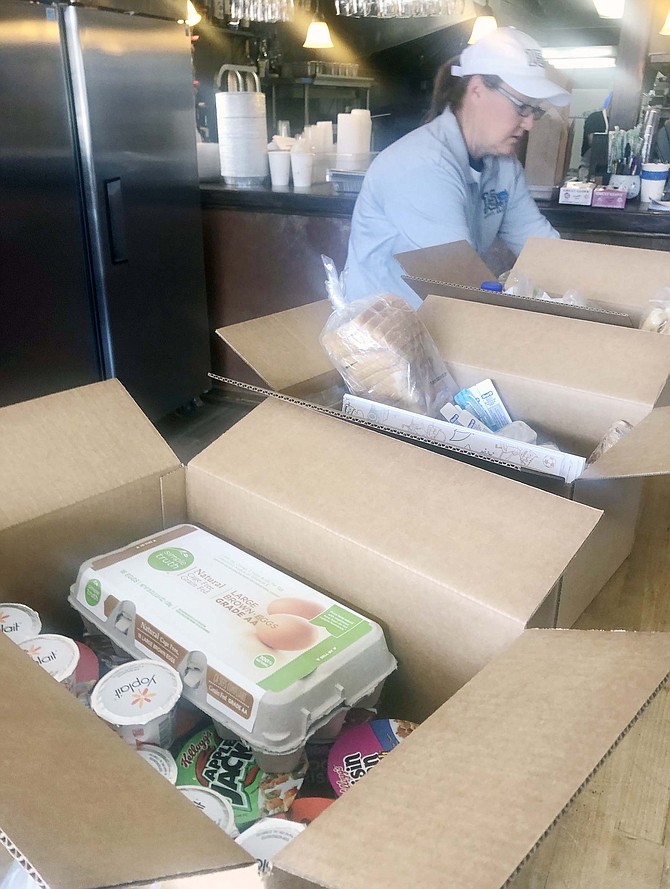