Coronavirus shoots $1 billion hole in Arizona budget
Total deaths from COVID-19 could be as low as 230 or as high as 2,361 by end of May 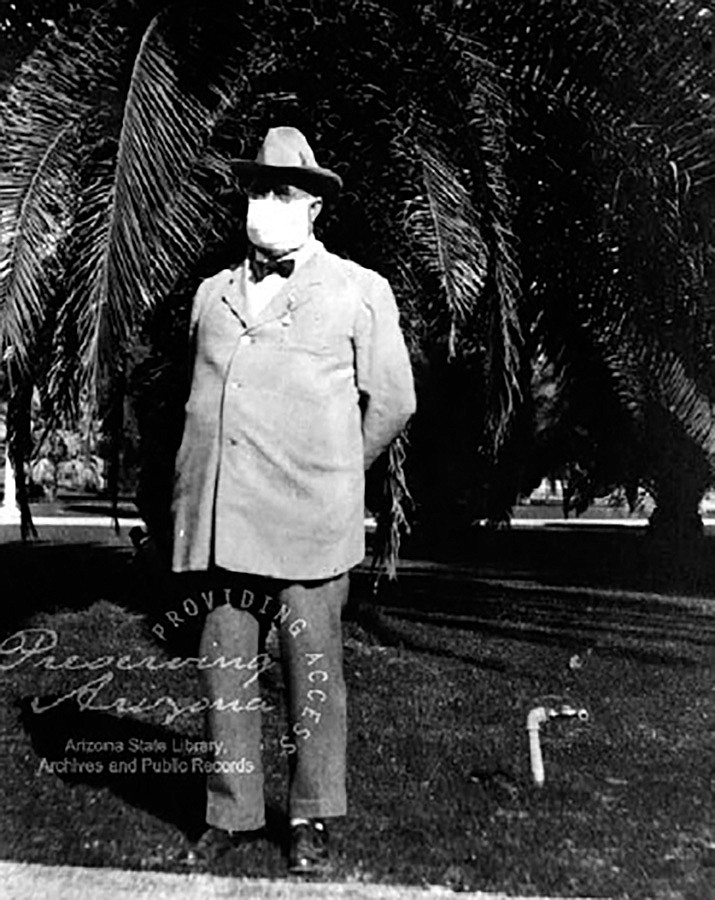 Gov. George W.P. Hunt in 1918 on the lawn of the Capitol during the Spanish Flu pandemic. (Joint Legislative Budget Committee/Courtesy)

PHOENIX — The COVID-19 outbreak is going to blow a huge billion hole in state finances.

And about 775 Arizonans will die by the end of May.

Those predictions came Thursday, April 9, from the Joint Legislative Budget Committee as staffers said the decline in state revenues plus additional costs to the state from the effects of the virus should leave Arizona with a $1.1 billion budget deficit by the end of the coming fiscal year. That’s out of what is basically an $11.8 billion spending plan.

The potential fiscal effects of the pandemic are even more dire.

The new report says that $1.1 billion deficit comes even after the state uses close to $1 billion it was expected to have left over by the end of this budget year on June 30.

There is one bright spot of sorts. The state does have about $973 million in its “rainy day’’ fund, a special account set aside for emergencies. And legislative budget staffers said there will be some relief funds coming in from the federal government.

But it also could mean that lawmakers, who until a month ago were planning way to spend what was expected to be a cash surplus, will now have to find places to cut.

And there’s something else. Even if the more immediate revenue shortfall gets addressed, whether with the rainy day fund or something else, budget analysts are predicting another $1 billion shortfall in the 2021-22 fiscal year. That’s because the number of people in the state’s Medicaid program is still expected to be high. But by that point, the extra dollars the federal government is providing to help will have disappeared.

Richard Stavneak, staff director of the JLBC, told members of the state’s Finance Advisory Committee who were reviewing the report that making projections at this point is risky.

“Those virus forecasts are extremely speculative and changing weekly,’’ he said.

That starts with projections of the effect on Arizona. 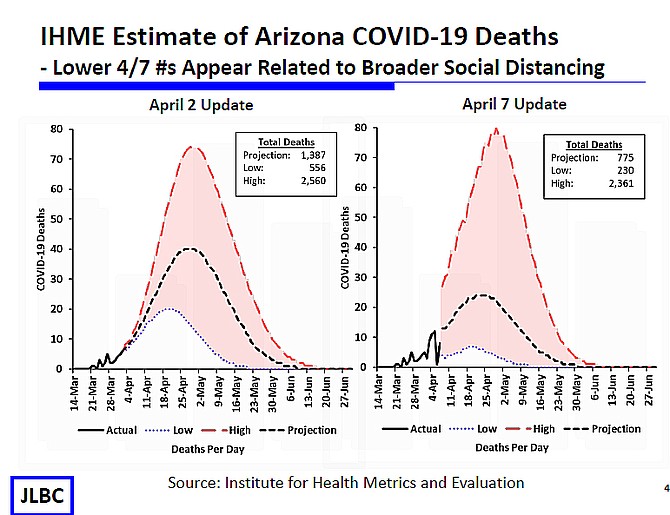 As of Thursday, state health officials had reported 89 deaths. But Stavneak said the Institute for Health Metrics and Evaluation is predicting that Arizona will end up with 775 deaths by the end of May.

There is some wiggle room in those numbers, with IHME reporting the total could be as low as 230 or as high as 2,361.

By Memorial Day, though, Stavneak said the number of deaths per day could drop to close to zero.

But that may not be the end. “There is typically a second wave that comes,’’ Stavneak said.

“The hope is we would be better prepared in terms of mitigation strategies,’’ he continued. “But we’re still a year out from a vaccine.’’

And what that means, Stavneak continued, is that the Arizona economy, driven by income and sales taxes, could take much longer to recover.

Gov. Doug Ducey brushed aside the projections. “Some of the announcements today are basically guesses,’’ he said.

“No one really knows because the economy is not operating,’’ he continued. “And without economic activity it’s very hard to make forecasts.’’

For the moment, economists are looking at the indicators they have to make some forecasts.

Among those is that the Phoenix hotel occupancy rate fell by 71% in the last week of March. That affects not just the tax revenues from the hotel rooms but the fact that people are not coming to Arizona and spending money here.

At the same time, the report says, several restaurant chains have reported a 70% decrease in sales, even with an increase in takeout orders. That is directly related to the directives by Ducey closing restaurants for in-house dining and, more recently, his stay-at-home order restricting travel to essential business.

And then there’s the fact that nearly a quarter million Arizonans have applied for unemployment benefits in the past three weeks alone. By comparison, total private sector employment in Arizona before the pandemic was about 2.5 million.

Part of the problem with predictions, he said, is that the state is working with only limited data. For example, sales figures for March — and the sales taxes collected — won’t be fully reported until June.

There also are variables in anticipated income tax collections.

The prediction is that withholding revenues — the amount taken out of employees’ paychecks — is expected to drop by 15% as there are fewer people working. And even the decline in the stock market will have an effect when people file their returns, what with no capital gains and people actually declaring capital losses.

Then there’s expenditure side, notably the Arizona Health Care Cost Containment System, the state’s Medicaid program, with eligibility linked to individual income. He said there was a 2.3% increase in enrollment at the beginning of this month alone, a figure he called “pretty dramatic for a single month.’’

Stavneak said that’s why he’s not urging state lawmakers to craft solutions at this point given the variables. He said his staff should have better numbers in June.

Still, Stavneak said, there is some work that can be done now.

“Legislators may well want to start holding discussions about potential solutions,’’ he said.

Economist Elliott Pollack, a member of the Finance Advisory Committee that reviews the data, agreed that trying to make accurate predictions is difficult. He called the current situation a “black swan event.’’

“You can’t plan for anything like this,’’ he said. And Pollack said that this isn’t a question of trying to stimulate an economic recovery.

Pollack also said there is reason to believe there will be a much longer-term financial hangover, even after the virus goes away. He said that “social distancing’’ may become built-in to individual behavior.

“More people are going to be working from home,’’ Pollack said.

“You’re going to have more takeout and less eat-in at restaurants, especially if there’s close seating,’’ he continued. “Airlines are going to have a tough problem getting people into planes.’’

And Pollack said there will be fewer vacations to crowded places, “which affects us.’’

Pollack said something else could affect the speed of the recovery, what he called the “negative incentives to work.’’

He pointed out that the Coronvirus Aid Relief and Economic Security Act adds $600 a week to unemployment benefits. That brings the total in Arizona to $840.

“A lot of people will end up with more money from the CARES Act, once the money starts getting there, than they will get as being employed,’’ Pollack said.