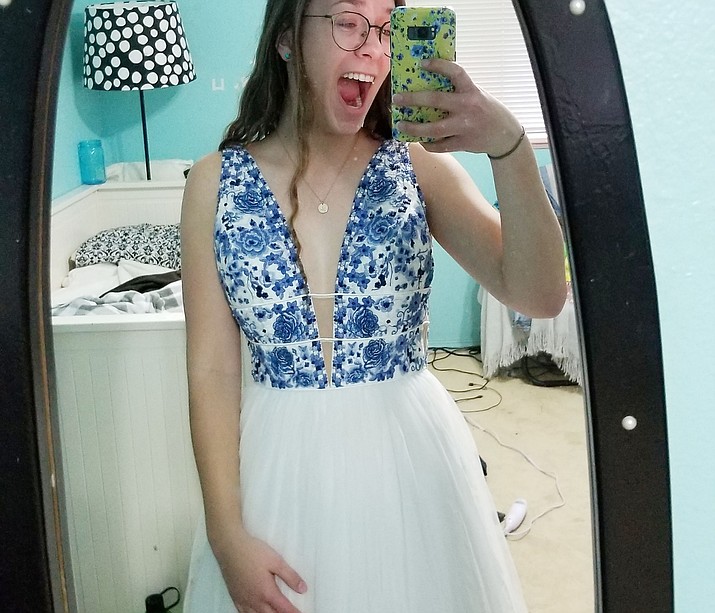 Madison Jackson, the yearbook editor at Prescott High School, poses in a prom-dress selfie. The annual dance is up in the air right now due to the coronavirus. (Madison Jackson/Courtesy)

Prescott High School senior Madison Jackson twirled in front of a mirror in her knock-off price designer gown, an elegant deep-blue beaded and white tulle halter dress she was to wear to the April 17 prom.

The student leader was excited about traveling by limousine with her friends, posing for pictures of them in all their youthful finery, the proverbial cherry to top off 13 years of her PUSD education.

Except it is not going to happen — at least not as planned.

For high school seniors across the quad-city area, the COVID-19 coronavirus torpedoed long-anticipated traditions and rites of passage, infecting many with an ache for memories they simply don’t get to make.

No proms. No scholarship nights. No yearbook signing days. No senior trips. No state athletic championships. No senior sunset party.

At least delayed, and maybe even virtual, graduation ceremonies.

“It definitely sucks,” declared Chino Valley High School senior and athlete J.R. Willingham, who will miss out on a promising final spring baseball season and renting a tuxedo for prom with his classmates.

Students headed off to spring break with no sense a global germ would precipitate the closure of all schools two months early — canceling the fun that so many anticipate from kindergarten forward, she noted.

Amid depressing daily news accounts of business shutdowns, mass layoffs, illness and death, these students are left to grapple with the grief that comes with missing out on their milestones.

Physical distancing to stay healthy may be a necessity, but the isolation has all on edge. Social media and virtual gatherings are no replacement for the real thing, said Kayla and other seniors.

“We had all these expectations of our senior year … and now we’re coming to a realization that we’re not going to have the same experiences as every other generation of seniors,” Kayla said. “This is revolutionary.”

Madison, the Prescott High yearbook editor and student representative to the school district Governing Board, described the sentiments of her friends and classmates as a “group sad.”

“We’re all feeling pretty gutted that this is the way it’s going to end,” Madison said.

Part of what is hardest to digest is how sudden, and how drastic, was the response to this virus, Willingham said.

His hope is that, somehow, they can still put a bow around the high school years with a formal graduation gathering.

“I’m definitely not happy about it,” he said of the losses. “But we have to keep living life. There’s nothing we can do about it … so I can’t get too upset.”

Somehow or another, area school superintendents and high school principals say they intend to find a way to give honor to this class that has earned that right through their academic tenacity, athletic training, community spirit, and abundance of youthful ebullience and optimism.

“This is profound for them. It breaks my heart,” declared Tri-City College Prep Principal Keri Milliken of her 58 seniors.

One of the highlight senior traditions is the senior sunset — closing a circle started with the senior sunrise at the start of their last year. On that morning, students write their expectations for the year; at sunset, those letters are then returned to them as yet a final reflection of their high school years.

Milliken promises it will happen — she just can’t yet say when. Same with the other one-of-a-kind events.

“We’re determined that we are going to do everything in our power to have a prom and graduation event, even if it is in June,” she said.

A four-year wrestler, Howard was headed to become a state champion. Two weeks before competition, he broke his collarbone.

He gets choked up when he talks about the Class of 2020’s dashed hopes. Though theirs is a global grief, he said, the individual heartache is still acute.

“We’re all in this boat across the country,” Howard said. “It’s unprecedented times. All bets are off. And I think the seniors know that, and are dealing with that.”

Howard and all his area colleagues are continuously peppered with questions from students, parents and community members about how they can guarantee seniors are not cheated out of their celebration.

They admit they don’t have all the answers yet. They are, though, thinking outside the box to come up with some.

“Our Prescott traditions are important to all of us and we will do all we can to uphold them,” Howard said in a Facebook post of evolving plans for both a virtual and in-person graduation, as well as delayed prom-style dance and Grad Night.

Humboldt Unified School District Superintendent Dan Streeter said his administrative team has yet to scuttle the scheduled graduation ceremony at the Findlay Toyota Center on May 21. If necessary, though, new dates will be selected, hopefully in June before students move away to college, career or military commitments.

“We’ll make it happen,” Howard said, echoing his area education colleagues. “It’ll look different because of all this, but we’ll put in extra work to make it just as special.

“We’re NOT going to let them down!”