The dash to Aisle 11: Welcome to the time of the coronavirus 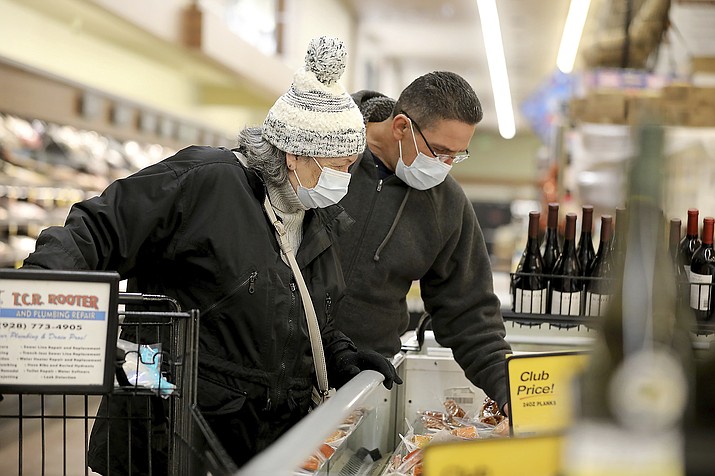 Hector Molina, right, helps his mother Gertrude Moore as the pair shop at the Safeway store in the University Plaza shopping center in Flagstaff, Ariz., at 6 a.m. Thursday morning, April 2, 2020. Some area stores have set aside special hours for seniors to shop to avoid exposure to the general public. (Jake Bacon/Arizona Daily Sun via AP)

FLAGSTAFF — Well before sunrise on a recent Thursday, while most Flagstaff residents were still snoozing, a small band of shoppers of, well, “a certain age” assembled outside the doors of the westside Safeway.

They had carts queued and lists in hand, ready to take advantage of the grocery store’s “Special Shopping Days,” each Tuesday and Thursday morning from 6 to 9 a.m., reserved for seniors (65 and older), pregnant women and “customers with a disability or compromised immune system,” as the sign taped to the front door instructed.

Grocery stores throughout Flagstaff, as in other communities, have reserved special hours for seniors, and people are flocking to take advantage, the Arizona Daily Sun reported.

Welcome to life in the time of the coronavirus. Heartening to report that, while waiting for the stroke of 6, the people in line scrupulously observed social-distancing strictures, giving each other and their shopping carts wide berths.

HOURS AT AREA GROCERS & BIG-BOX STORES DUE TO COVID-19; this list is not exhaustive, please contact your store prior to going.

Senior hours in Prescott Valley: 6 to 7 a.m. daily, through the end of April.

There was 65-year-old Chris Spyrow, up front, needing to buy meat and other perishables for his son, who is dealing with brain cancer and on a special keto diet.

There was John Aber, hoping to score some toilet paper.

And Lisa Roberts, anxiously rocking her cart back and forth, with a long shopping list, but desperately seeking hand sanitizer and toilet paper — just a few rolls, mind you, enough to tide her over.

And, off in the back, leaning against a pillar in the parking lot, was Mike Franklin, content to let others go before him.

“Even now, this is the second third or fourth time I’ve come here and can’t find what I need,” Roberts lamented. “I need more hand sanitizer and toilet paper, but they never have it. I’m hoping today I’ll get lucky.”

And, at the appointed hour, the glass doors opened and in came the early-bird hordes — not to hoard, just to get the essentials like meat or milk, flour or pasta, a simple can of beans. Would the shelves be barren, as some had seen on previous outings? Or would the early hour bring an abundance of restocked goods?

When Roberts entered the store, welcomed by a blast of heat that cut the chill from waiting outside, she made a beeline for Aisle 11. That’s where the paper goods could be found, and other shoppers followed suit, making sort of a conga line, as Stevie Wonder was crooning “Baby, everything is all right…” on the piped-in Muzak.

But when she made the right turn onto Aisle 11, Roberts saw the same old sight: empty shelves. Audible groan. But a Safeway clerk hovering nearby interposed.

She had scored. There, surrounded by emptiness, was a tightly-packed stack of Scott brand toilet paper — eight-packs, boasting 1,000 sheets per roll. There were, by one count, 40 packages available when the doors opened.

“The sign here says I can get two, so I will,” Roberts said.

She squeezed two packs and tossed them in her cart with a satisfied sigh and rolled off. “I’ve got my 82-year-old mother in-law’s list and a 50-dollar bill, so I need to get going. She can’t get out. Actually, I shouldn’t be out, either.”

Rolling up behind Roberts in Aisle 11 were Gertrude Moore, 77, and her son, Hector Molina, both wearing surgical masks. They have been self-isolating for three weeks, not because anyone they know has tested positive for COVID-19, but simply out of an abundance of caution. (Moore has underlying medical conditions.)

Mother and son snagged two packages and before heading over to the canned food aisle to look for beans, they reflected on the rush grocery stores have experienced since the coronavirus angst has taken hold in the populace.

“Everybody’s scared, scared of the unknown,” Molina said. “Nobody knows what’s going on. The government’s not being honest with us.”

“When I heard we had one (positive test) in Flagstaff,” Moore added, “that’s when I started wearing the mask.”

Next along Aisle 11 came Franklin, sans cart or even hand basket. He’s the gentleman who hung back outside to let others go first. Franklin, who is from the Phoenix area and in Flagstaff to work on the crew remodeling the Safeway store, grabbed a single package of toilet paper.

“My wife and daughter and everybody, they don’t have anything down in the Valley,” he said. “It’s worse than here. I’m not a hoarder. But I’ll get one (toilet paper package) whenever it’s available. I let the locals go first.”

By 6:20 a.m., only about half the packages of Scott Brand remained. But early-bird shoppers had other items to procure.

Near the back of the store, along the freshly restocked meat section, Dixie Kunze checked out the offerings. Her cart had only a few items in it, as of yet, but she was slowly but surely getting her shopping done.

Let’s just say Kunze is not a morning person.

“I’m retired,” she said, laughing, “so I don’t have to get up early. When people talk about lifestyle changes now, this is it for me. I’m usually never up at this hour.”

To Spyrow, the first in line, the idea of hoarding is detestable. He says he purchases only what he needs for his ill son. He urges others to stop the selfishness.

"We’re going to get through this," he said. "If everybody pulls together, it’ll be easier than if everybody tries to outdo each other. America now is a team. A team. You can’t think of yourself first anymore."