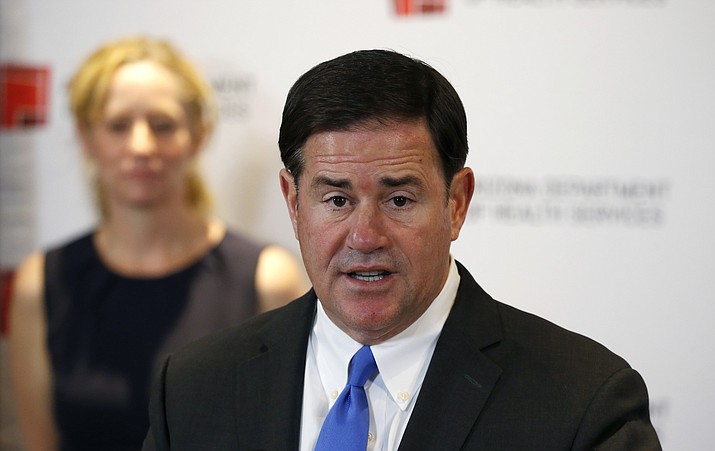 In this March 23, 2020 file photo, Arizona Gov. Doug Ducey, right, and Arizona Department of Health Services Director Dr. Cara Christ, left, provide an update on the coronavirus during a news conference in Phoenix. In an executive order Thursday, April 2, Gov. Doug Ducey barred pharmacists from dispensing hydroxychloroquine or chloroquine unless they have a prescription from a doctor saying the patient actually has the virus. (Ross D. Franklin/AP, file)

EDITOR'S NOTE: This story has been updated from a previous version to change the wording from barred to restricted, in paragraph two, and headline.

PHOENIX — Arizonans hoping to avoid contracting COVID-19 won’t be able to get their hands on an experimental drug, at least not legally here in the state.

In an executive order Thursday, April 2, Gov. Doug Ducey restricted pharmacists from dispensing hydroxychloroquine or chloroquine unless they have a prescription from a doctor saying the patient actually has the virus.

And even in that case, the governor limited the prescription to no more than a 14-day supply, with no refills without a new prescription.

The order follows the publication earlier this week of small study by a group of Chinese doctors, which showed patients who received hydroxychloroquine, a known anti-malaria drug, had more rapid recovery of body temperature and reduced coughing than those in the control group who did not get the drug. There also was a larger proportion of patients with improved pneumonia in the group that got the drug.

But public interest in hydroxychloroquine and its closely related chloroquine predates that, coming after President Donald Trump last month mentioned them in a White House briefing. Both are currently used largely to treat malaria.

That, in turn, has created a spike in demand, resulting in shortages for patients who use the drugs not only for malaria but autoimmune diseases like lupus and rheumatoid arthritis.

Ducey’s restriction on dispensing of the drugs came as part of a larger executive order dealing with access to other prescription medications.

For many, the most significant part of that is a directive to the state Board of Pharmacy to allow druggists to “utilize their professional judgment” to dispense emergency refills of maintenance medications for up to a 90-day supply without getting a written prescription. The order also permits an additional 90-day supply “if necessary.”

That order does not cover various narcotics such as oxycodone, codenie and fentanyl. But it does waive the rules that now require a written prescription, allowing a doctor to fax, scan or send a photo of the prescription.

There’s also a provision that could be a boon for availability - and potentially price - allowing pharmacies to receive drugs from an unpermitted manufacturer in another country “to alleviate pharmaceutical shortages.”

“Given the enhanced demand on our hospitals and our medical providers, we want to make sure that Arizonans have all the access to the medications that they need,” said gubernatorial press aide Patrick Ptak. He said the move to allow importation is not unique, saying it already is allowed by several other states “and is considered best practice for times like this.”

The restrictions on who can get hydroxychloroquine and chloroquine fall into the same category, according to Trisa Guzman Glover, the governor’s director of boards and commissions.

“It is limited to the diagnosis or the suspected positive for COVID-19 so that we’re not running into shortages for those individuals who are taking it for other reasons,” she told Capitol Media Services.

This isn’t just an Arizona problem given the publicity the drugs were given not only by Trump but also some much earlier reports of studies out of France and China, studies that some scientists are questioning because they did not have a control group for comparison.

“Nationwide there are shortages with this medication,” Glover said. “And I think those are affecting Arizona as well.”

The latest Chinese study has its own limits.

Starting with 142 patients with confirmed COVID-19 patients, it was whittled down to 62 after eliminating severe and critical illness patients, those with various other diseases including severe renal failure, and those who had received any trial treatment for COVID-19 within 30 days.

What was left were those for whom a CT scan showed pneumonia but those with what was described as a “mild illness.”

“Despite our small number of cases, the potential of HCQ in the treatment of COVID-19 has been partially confirmed,” the authors said.

They acknowledged the need for large-scale clinical and basic research. But they said that should not stop doctors from using the drug.

“Considering that there is no better option at present, it is a promising practice to apply HCQ to COVID-19 under reasonable management,” the paper states.