COVID-19: Dept. Of Corrections not accepting inmates from county jails 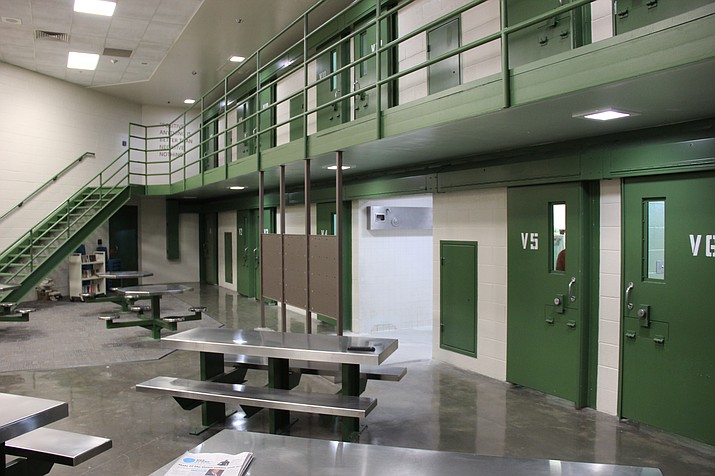 This undated file photo shows the inside of Yavapai County jail in Camp Verde. A change in operations by the Arizona Department of Corrections could have a considerable impact on how county jails, including those in Yavapai County, conduct some business involving defendants and convicts in the weeks and months ahead. (Max Efrein/Courier, file)

CAMP VERDE — A change in operations by the Arizona Department of Corrections could have a considerable impact on how county jails, including those in Yavapai County, conduct some business involving defendants and convicts in the weeks and months ahead.

Friday, the department posted a “COVID-19 Management Strategy Update” to its website, announcing it will not accept inmates from county jails for 21 days. On April 20, the system will start to admit inmates on a structured basis.

As of Friday, there were no known COVID-19 cases at any of ADCRR’s 16 prison complexes, which house more than 42,000 inmates; Of those inmates evaluated for flu-like symptoms, 39 inmates have been tested for COVID-19, 29 are negative, and five had results pending.

No information about prison staff COVID-19 testing or results has been released.

“As a further proactive measure to combat the potential spread of the COVID-19 virus in Arizona’s prisons, ADCRR has reached a collective agreement with sheriffs in all 15 counties to temporarily suspend admissions of convicted persons from county jails for 21 days,” the statement reads. “This will be followed by subsequent 21-day cycles of prudent admissions.

In a statement, Yavapai Sheriff Scott Mascher said April 1 the Camp Verde Detention Center will have to make some adjustments.

“Although the decision adds some difficulty to the jail operation, as we are already overcrowded, my jail commander has already begun accommodating the directive and housing inmates scheduled for the DOC in a special area of the jail,” Mascher said. “The pandemic has brought new challenges and I understand the need to work with our justice partners on this and limit such movement until prudent."

Last week, the Arizona Supreme Court ordered all jury trials scheduled in superior, justice and municipal courts to be postponed until at least April 17.

Yavapai County Superior Court Deputy Administrator Julie Malinowski said April 1 that the change is unlikely to have much impact on how judges handle cases and caseloads. Once an inmate is adjudicated and sentenced, the physical movement of inmates within or in and out of any facility is the detention staff’s concern.

“I can’t speak for individual judges, but I don’t know that judges will take something like this into consideration in sentencing or scheduling,” Malinowski said. “It’s such a fluid situation.”

Malinowski said there haven’t been any specific hearings, documents or procedures developed especially for county or state inmates diagnosed as COVID-19 positive, but there have been discussions among court staff about more elaborate health-emergency policies and procedures than what’s already on file.

A March 30 ADCRR statement said the move to close prisons to new inmates was spearheaded by ADCRR Director David Shinn, in collaboration with each sheriff, “as part of ADCRR’s continued efforts to prevent the potential spread of the COVID-19 virus.”

“Today is another example of how law enforcement agencies across the State are working together to prevent the spread of the COVID-19 virus while maintaining public safety,” Shinn said, in the online statement. “I want to thank all 15 sheriffs for their commitment and partnership. In particular, I also want to thank Maricopa County Sheriff Paul Penzone and Pinal County Sheriff Mark Lamb, for their exemplary leadership in this collaborative law enforcement effort.”

The department invited the public to track its response to COVID-19 by visiting its website, corrections.az.gov, as well as by following @AZCorrections on Twitter.