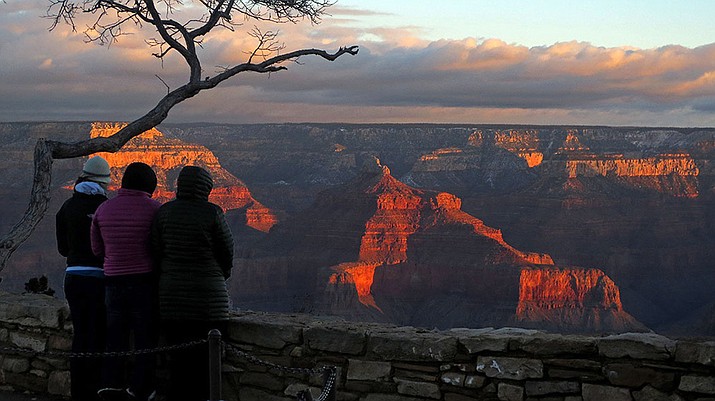 The National Park Service closed Grand Canyon National Park on Wednesday, April 1, bowing to weeks of pressure after health officials expressed “extreme concern” about the potential for spread of COVID-19 in the park.

The park has been open with reduced services – and no entry fee – for 2 weeks as the number of coronavirus cases have spiked in the state and the nation and as public health officials have enacted increasingly strict limits on gatherings and public activities.

Those increases were cited Wednesday by Coconino County Chief Health Officer Thomas Pristow, who said the county has recorded 82 COVID-19 cases and four deaths from the disease. Projections of the disease’s growth over the next month are “staggering,” he said in a letter to park officials.

Interior Secretary David Bernhardt said the decision to close the park came “as soon as we received the letter.” The park was closed immediately and will remain closed indefinitely, he said in a press release.

“The Department of the Interior and the National Park Service will continue to follow the guidance of state and local health officials in making determinations about our operations,” Bernhardt’s statement said.

But Rep. Raul Grijalva, D-Tucson, who had joined others urging the park’s closure, called Bernhardt’s explanation “absurd on its face,” noting that Pristow sent a similarly urgent letter Friday. He said “any competent authority would take notice and act immediately.”

“Instead, the Interior Department delayed for nearly a week while the governor remained silent,” Grijalva said in a statement Tuesday. “Secretary Bernhardt can’t blame anyone else for his inability to make the obvious and necessary decision.”

The Grand Canyon drew 6.3 million visitors who spent $947 million in the region in 2018, according to a National Park Service report last year. It said tourism to the park generated $1.2 billion in total economic activity and supported more than 12,000 jobs in the region.

Despite the potential economic hit, an official with the Grand Canyon Chamber of Commerce and Visitors welcomed the closure.

“I know for the safety of the residents, we’re happy that we’ve gotten to this point,” said Laura Chastain, the visitors bureau spokesperson. “Just wish it would have happened sooner.”

Tusayan Vice Mayor Brady Harris said he respects the “difficult decision” to temporarily close the park, “given the rapid spread of COVID-19.”

“It was made with the best interest of our residents in the surrounding community, by closing the Grand Canyon National Park,” Harris said. “I hope that the spread of this virus will be curved, allowing us to return back to normal as quickly and safely as possible.”

Calls for the park’s closure had been made by Coconino County officials and the Navajo Nation, among others. They were joined Tuesday by 10 members of Congress, including three from Arizona, who urged Bernhardt to close the park, citing public health and safety concerns. The lawmakers’s letter said that in one day on a popular Grand Canyon trail, a park ranger “had 600 contacts with visitors.”

Rep. Tom O’Halleran, D-Sedona, who signed the letter, said Wednesday he was glad to see Park Service leadership listened to concerns from members of Congress and others.

“While I am committed to protecting our public lands and ensuring that they are accessible to all Americans, the health and safety of my constituents is my top priority,” O’Halleran said in a press release following the closure announcement. “I believe that this is the correct course of action.”