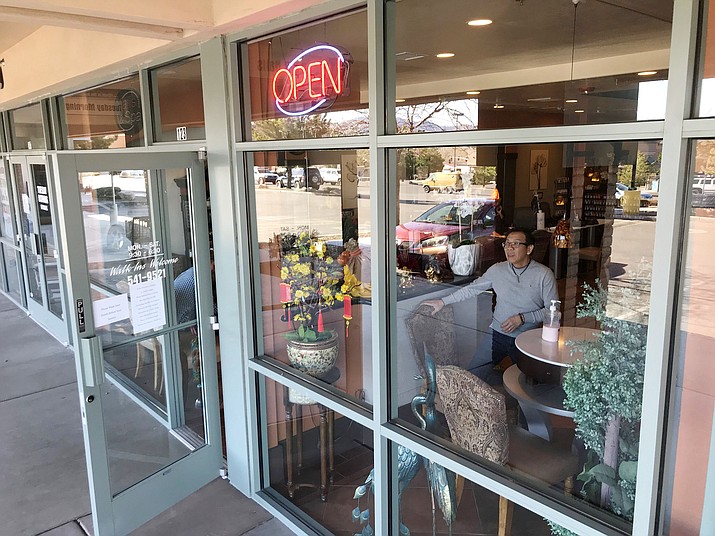 A worker at V & B Nails on Gail Gardner Way in Prescott looks out the window of the salon at a virtually empty parking lot. On Friday, April 3, Gov. Doug Ducey released additional guidelines to his Stay-at-Home order that calls for the closure of services such as nail salons and aesthetic salons, barbers, cosmetology, hairstyling, tanning salons, tattoo parlors, spas and massage parlors. The new directives go into effect at 5 p.m. Saturday, April 4, 2020. (Richard Haddad/Courier)

Conceding there’s no way to operate them safely in the middle of the COVID-19 pandemic, Gov. Doug Ducey on Friday, April 3, ordered the shuttering of barbers, beauty parlors, nail salons, massage parlors and spas.

The edict — which takes effect at 5 p.m. Saturday — also further narrows his original list of “essential services” to require the closure of any amenities at public parks “that do not allow for recommended physical distancing or proper hygiene.” That includes everything from basketball courts and playgrounds to public restrooms.

But it does spell out that everything else in public parks “shall remain open to the greatest extent possible.”

Also closing under the governor’s order will be swap meets.

And pools at hotels, condos, apartment complexes and in city parks also will be shut.

The new order comes nearly two weeks after questions were first raised about the governor’s decision to not only allow barber shops and hair salons to remain open but to specifically prohibit the state’s 91 cities and towns and 15 counties from using local orders to shutter them.

Prescott Mayor Greg Mengarelli announced the governor’s decision toward the end of a virtual town hall that he and the City Council hosted Friday afternoon.

He did not give an opinion, but stated that the businesses that Ducey was referring to must close by 5 p.m. Saturday.

Prescott Valley Mayor Kell Palguta echoed that sentiment, telling the Courier, “The Town of Prescott Valley supports the State of Arizona and the governor’s decision to remove hair salons and barber shops from the essential businesses list.

“In this ever-evolving time, each citizen needs to make a cognizant decision to try and slow the virus curve of infection. I’m confident that the citizens of Prescott Valley are up to the challenge to do their part. We are all in this fight together and must remain united if we want to be successful in overcoming this pandemic.”

Chino Valley Mayor Darryl Croft did not respond to calls for comment prior to press time.

It was Ducey’s original order that caused Tucson Mayor Regina Romero to not include these businesses in her own proclamation a week ago, saying she has to “respect the governor’s executive order.” Instead, she could only “strongly recommend” that they close.

On Friday, Romero said the governor is doing the right thing — even if, as she believes, he had to be pressured into it by herself and other mayors.

“I’m glad that he heeded our call, that he heard us as the front-line jurisdiction that sees this first hand and the concerns that cities had about being able to provide safety and health in our community,” she told Capitol Media Services.

And Romero said it was not just the mayors who were concerned.

“I think he heard the community and all Arizonans, loud and clear, as well,” she said. “This is not about vindication. It’s something that is good for every Arizonan.”

Friday’s directive by the governor also legitimizes the order by Flagstaff Mayor Coral Evans who, defying Ducey, had previously ordered these businesses shuttered in her city. That risked a legal fight and even threats by Rep. Vince Leach, R-Tucson, to file a complaint that could have resulted in the loss of that city’s state aid.

Evans was pleased by the news.

“He’s updated his executive order to reflect the fact that we are trying to prevent people from dying,” she said. “I think it’s been two weeks of him growing his understanding about the severity of this issue.”

In issuing the new directive, the governor did not admit that he was wrong in the first place for deciding that hair and nail salons and similar businesses were essential “personal hygiene services” and could be safely operated even during the outbreak. Instead, he said, it is simply a question that “guidance from public health officials evolves.”

“During these unprecedented times, providing clarity for small businesses and employers is an important measure to ensure we protect our citizens, slow the spread of COVID-19, and protect this critical part of our economy,” Ducey said in a prepared statement.

Press aide Patrick Ptak echoed that Friday’s order was not any concession that the original list of essential services issued on March 23 was too broad and risky from a health perspective.

“What today’s guidance does is clarify within the categories that were identified in the governor’s additional executive order,” he said, referring to that March 23 list. “As we’ve said all along, as guidance from health officials evolves we’ll continue to release information and direction as needed.”

And Ptak said the governor indicated during an hour-long televised live town hall that he already was considering revamping his original order.

“We determined there was room to provide additional guidance,” Ptak said. “And here it is.”

The flip side of Ducey’s order is to spell out those personal hygiene services that remain essential and off-limits to local regulation.

Most notably, the list includes motels and hotels that are used for lodging. And their restaurants also can remain open but only to provide deliver or carry-out food services.

The permitted list also includes daycare centers, but only those who provide for the children of individuals who are working at other essential jobs.

In drawing the line on outdoor activities, Ptak said the governor was focused on what can be done safely. That, said Ptak, is why Ducey decided that basketball courts should be off limits.

“The guidance is to eliminate, cancel or postpone social gatherings of 10 or more,’’ he said. “Activities that could lend themselves to people congregating for that type of physical contact were the ones we wanted to clarify would be considered non-essential.”

While Evans praised the governor to coming around to her thinking on beauty salons and barbers, she said Ducey should consider even greater restrictions. And what she most immediately has in mind are grocery stores.

She wants grocery stores to go entirely to either delivery or pickup mode, where people can call in or email their orders. Evans also cited services like Instacart that operate almost like an Uber-Eats service, pickup up items from local stores and delivering them to people’s homes.

The issue, Evans said, is keeping not just shoppers safe but also employees at grocery stores who have to interact with customers.

“They don’t get hazard pay,” she said.

Still, Evans conceded there are people — herself included — who tend to like to go up and down the aisles of grocery stores to decide what they want.

Reporters for The Daily Courier contributed to this article.