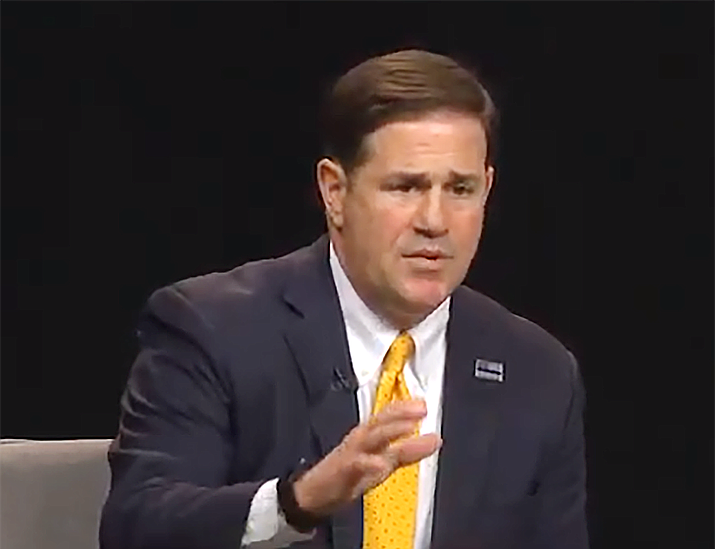 But during an hour-long televised forum, the governor avoided answering questions specifically about what else he has in mind.

Checkpoints to enforce his stay-at-home order? “We have a list of things that are possible,” Ducey said.

Forcible quarantine of people arriving here from other states with outbreaks? “We’re doing the testing so that we have the proper surveillance so we can make decisions and get people the care that they need inside the healthcare system,’’ the governor responded.

People who don’t listen to his stay-at-home order? “In a declaration of emergency there are an incredible amount of tools and authorities that are granted a governor,’’ Ducey said. “And I will use every tool in the toolbox and escalate as necessary to navigate Arizona through this.’’

The governor also declined to predict how long the COVID-19 outbreak will last or how long restrictions might be necessary.

“Anybody who tells you that they know when this is (over) is guessing,’’ he said. “And they don’t know.’’

What Ducey says he does know is what his plans are for this month and next.

“Right now, I’m looking out 60 days,’’ he said, as that is likely to be when there will be a “surge’’ in both people contracting the virus as well as hospitalizations.

The governor separately defended his decision to include beauty parlors and nail salons in his week-old list of “essential’’ businesses that his own subsequent stay-at-home order allows to remain open and precludes cities from shutting them down themselves.

“We’re trying to slow the spread of the virus in this country,’’ Ducey said. And he said the best way to do that is to break up large gatherings.

But co-host Ted Simons of KAET-TV questioned the wisdom of saying that it is OK to have someone styling hair, being right next to a patron, even if there are just two of them. “How in the world do they keep the recommended social distancing?’’ he asked the governor.

“We focused on shutting down as much as we could to slow that spread,’’ Ducey responded.

Less clear is whether he’s leaving the door open to greater restrictions, as already has already happened in Flagstaff where Mayor Coral Evans shuttered these establishments and as Tucson Mayor Regina Romero “strongly recommended’’ to establishments there.

“If there’s additional guidance that’s necessary, because those services are not covered under the order,’’ Ducey said.

“Do you understand, though?’’ Simons said.

Ducey declined to take a position on whether Arizonans should wear masks, whether surgical grade or simply something else to provide some protection against virus-carrying droplets being spread.

“If the Centers for Disease Control says to wear masks, you should wear masks,’’ he said.

“If there’s federal guidance to wear masks, we’ll put that directive out there.’’

But for the time being, Ducey said, the masks should be reserved for medical personnel and first responders.

“I’ve stayed within the guidance of the CDC and not guessed on what directives I should put forward,’’ he said.

State Health Director Cara Christ, also part of the hour-long town hall, said the CDC is reviewing the current guidance on the use of masks following reports that people are getting infected — and spreading the virus — two days before they show symptoms.

“So if you wear the mask you might be able to prevent speaking or sneezing or coughing,’’ she said.

But there’s a downside, Christ warned.

“It also puts you at risk when you’re touching your face and bringing it down and potentially having that false sense of security,’’ she said.