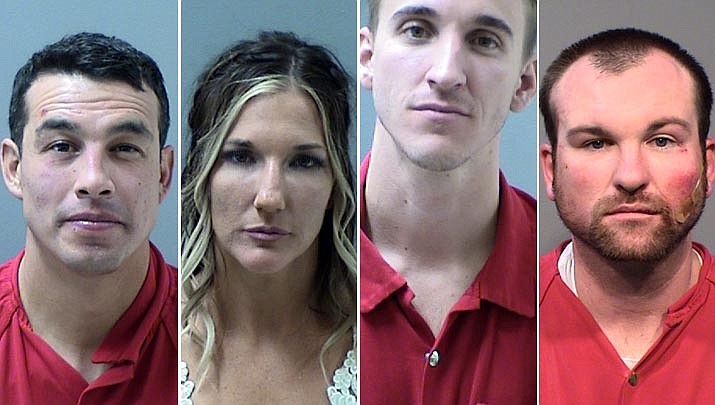 Prescott Police responded to the 100 block of N. Montezuma Street at approximately 9:34 p.m. Saturday, Sept. 28, regarding a report of a disorderly female wearing a wedding dress who just attempted to assault an employee from a local business.

A short time later, officers located a female matching the description in the 100 block of N. Cortez Street, and made contact with her, as well as a group of others who appeared to be arguing.

After an officer contacted the group, Cordova, 32, became verbally aggressive and reportedly “postured as though he was going to physically assault the officer,” according to Prescott Police Department spokesperson Corey Kasun.

“The officer attempted to restrain Cordova, who began to actively resist the officer,” Kasun said. “Cordova continued to struggle with the officer, and the two fell to the ground.”

During the struggle, several other people in the group who were accompanying Cordova reportedly began to assault the officer in an apparent attempt to prevent the arrest of Cordova.

Another officer arriving on scene had to physically remove people from the initial officer, who was still attempting to gain control of Cordova.

“During this time, members of the group refused to obey verbal commands and continued to assault officers on scene,” Kasun said.

During the struggle, Jordan, 30, became involved by striking an officer in the face with her hand and shortly after, pushed another officer.

“She was wearing a wedding dress and had apparently gotten married to Eric Cordova earlier in the day,” Kasun said.

After the arrival of several other officers, the group was under control.

Cordova and Jordan were arrested and booked into the Yavapai County Jail on charges of aggravated assault on a law enforcement officer, resisting arrest and disorderly conduct.

Two other men were also cited on charges of disorderly conduct, but were released from the scene.

No further details were available. Watch The Daily Courier and dCourier.com for more.