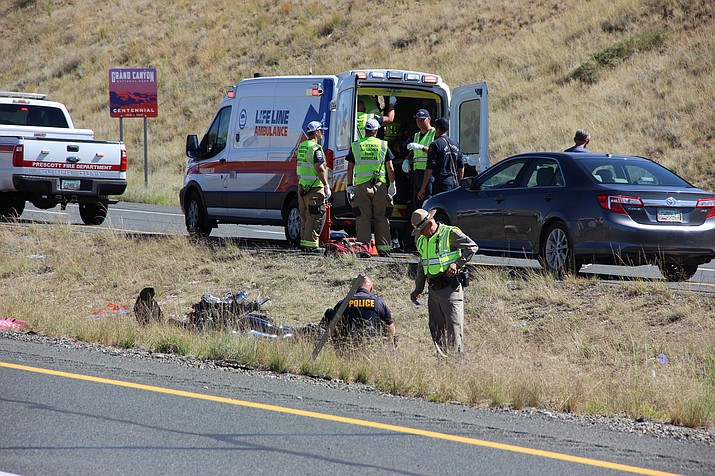 A Prescott Valley man died after his motorcycle crashed on Highway 89A at Granite Dells Parkway around 1 p.m. Monday, Sept. 30.

Francis Gary, 74, was riding eastbound on a 2017 Harley Davidson Road Glide when he pulled up along a vehicle in the neighboring lane and appeared to make some hand motions at the vehicle before drifting into the unpaved median, witnesses told officers with the Prescott Police Department (PPD).

Gary attempted to maintain control of his motorcycle, but ended up crashing and getting thrown from his seat, witnesses said.

Despite wearing a helmet, he suffered significant injuries and was transported to Yavapai Regional Medical Center, where he was later pronounced dead, PPD reported in a news release.

“At this time impairment is not believed to be a contributing factor,” PPD Lieutenant Jon Brambila said.

The vehicle Gary reportedly gestured to before crashing didn’t stop and police are seeking additional information about what occurred and who was driving the other vehicle, which was described simply as a “white passenger car.”

“We don’t know what the situation was between those two,” Brambila said. “If there was some sort of road rage; we’re not sure.”

The highway was closed in both directions for about an hour and traffic was diverted via the Granite Dells Parkway overpass. The southbound lanes and one of the northbound lanes was reopened around 2:15 p.m.

Members of the Prescott Police Department Traffic Safety Section will continue their investigation into the cause of the collision, Brambila said.

Anyone with information about the accident is encouraged to contact Officer Doty at 928-777-1949.