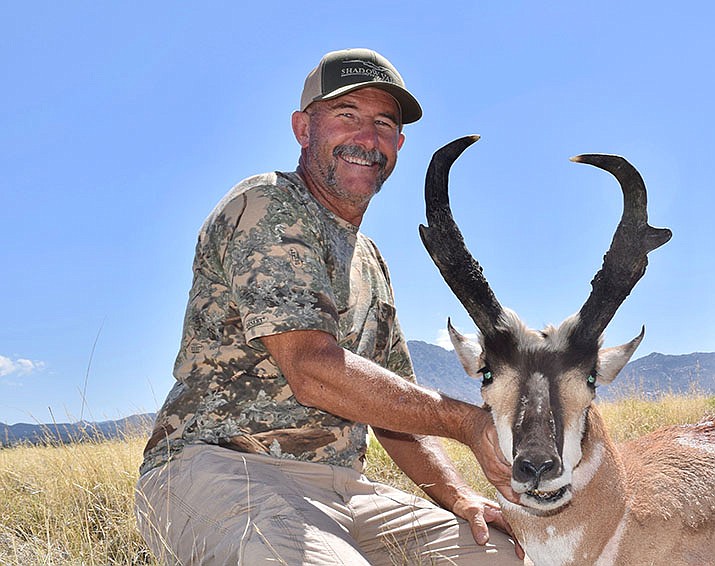 On the morning of September 23rd, 2019, in Flagstaff, Ariz., Pat McCarty (57) went to be with his Lord and Savior Jesus Christ. While we still have no answers as to what took his life other than infection, we know that he knew the ONE who has all the answers.

Pat was born to H.P. (Pa) McCarty and Reeda (Nana) Magness, he grew up in Arizona and was grateful his parents settled in Prescott to raise their family which included Pat and his three siblings; Larry (Butch), Sheri and Jeff. Pat loved Prescott for its small hometown feeling and amazing outdoor amenities. The lakes and national forests that surround his home made for a hunters paradise. He had a true appreciation for the outdoors and loved sharing that passion with his loved ones. While at Prescott High School he would often take off after class to go hunting in between wrestling and playing other sports. Pat enjoyed a good laugh and a great prank. These pranks still cause a joyous eruption of laughter for many people and they will keep his family laughing for years to come. It was here in Prescott that he met his hometown sweetheart and beautiful wife DeeDee.

Pat and DeeDee knew they wanted to remain in Prescott and wasted no time in starting their family and putting down roots. They welcomed their firstborn into the world in 1986 a son, Patrick Lee. Alongside his supportive parents, Pat and his wife DeeDee started their business in 1987 as they opened the doors of McCarty Builders. Pat was a talented and hardworking carpenter.

He loved to remind us that his Savior Jesus was also a carpenter. As the business grew so did their sweet family, they welcomed to the world another son Daniel Leslie (Boone), a daughter Sara DeAnn and their youngest daughter Kelly Mariah. Pat and DeeDee owned and operated the family business for over 30 years. They employed many family members as well as friends who became family.

As their children grew Pat and DeeDee were committed to loving them and being involved in their lives. This commitment led them to coach and help with t-ball, baseball, softball, basketball, wrestling, junior high and high school youth groups. Pat spent almost a decade being actively involved with and supporting the local wrestling community, in which he loved. As his children reached adulthood their professions and jobs led them to other areas of influence, Pat was right there continuing to support, serve and love them well. One of Pat’s favorite roles was providing support to the Wildland fire crew that would eventually become the Granite Mountain Hotshots. Pat loved those young men, employed some of them in the offseason and invested in those that he spent time with. Some of them even referred to Pat and DeeDee as “Dad and Mom of the crew”. To the many lives that Pat touched he provided fatherly leadership and genuine friendship. Many of those men are forever grateful for the time he spent with them.

Pat and his wife DeeDee committed their lives to serving the Lord together over 30 years ago. They dedicated their time, home, and resources for His purposes and glory. Pat was honored to serve in leadership at Heights church. In his service to the Lord Pat opened his home to numerous occasions and celebrations. Pat not only had the divine privilege of leading others to Christ he was also gifted the opportunity to baptize many of his small group youth as well as his loved ones. Pat had the honor of officiating weddings for both family members and friends. He mentored young couples in their marriages and encouraged young husbands to be Godly men. Pat lived to serve the Lord and love others well. Upon surrendering to God’s will for his life, Pat told the Lord he would never leave the country again after his first mission trip; that statement being said led him to over 8 trips to Cambodia and China (God has a sense of humor). His trips involved helping others build churches, health centers, and orphanages all while sharing the life saving news of Jesus Christ.

In the last couple years, Lake Powell became their second home and it was there that Pat and DeeDee were able to enjoy picturesque sunrises and sunsets together. They also had many trips enjoying their grandkids on the boat, and God’s beautiful creation around them (which of course included the fishing). Pat had a true appreciation for time with his family, he loved to wake up early and have donuts and coffee with their grandkids as they talked about the Lord and read the bible together.

Pat was an avid hunter and outdoors man who not only enjoyed the sport himself, but his true love and passion was passing down the tradition of hunting to those he loved most. For Pat it was never about the size of the game taken or number of fish caught, but always about the time well spent in the woods with family and friends. He loved to archery hunt for antelope during the heat of the summer and was always chasing elk on crisp fall mornings. A small stream in Colorado is where you could find him teaching his sons, daughters and grandsons how to fly-fish. Pat’s great love for hunting is not only comprised of stories and memories that will carry his family through the time they wait until they are reunited, but it has also bonded family and friends in previous generations as well as those to come. Pat spent the last couple of weeks of his time here on earth doing what he loved most. He was spending time with his beautiful wife and enjoying God’s creation at Elk camp with his family.

Pat’s favorite way to start the day was walking in the early morning around their property and home, holding his wife’s hand as they prayed for their children, grandchildren, family, friends and the needs of that day. He loved wrestling his grandkids, laughing hard, the pirates ride at Disneyland, John Wayne Movies, Sunday night dinners with his family, and having his family sit together at church. Pat was a man of strong faith; he had witnessed miracles, and he knew the best was yet to come.

He was welcomed in to Heaven’s gates. As the patriarch of our family he entered the presence of our heavenly king before the rest of his family will join him he is survived by his loving wife DeeDee, his faithful tribe: His son Patrick, his wife Olivia, their children Patrick Clayton and Taylor Jean His son Daniel (Boone), his wife Abby, their children Hannah Claire, Sarah Katherine, Ada Rousso, and Luke Daniel His daughter Sara, her husband Mario, their children Zoey Mariah, Carson James, and Nora Faye His daughter Kelly, her husband Sam, their children Brody Alexander, Levi Harrison, and Sara Jo

The family has been comforted knowing that as Pat left his earthy body he was welcomed into Heaven and the presence of his Savior hearing the words “well done my good and faithful servant”. We invite you to join us as we celebrate his life at 10am on Friday, October 4th 2019 at Heights Church, 2121 Larry Caldwell Drive, Prescott, Arizona.

In lieu of flowers, the family has asked that donations be made to the Heights Church Mission Fund. Pat had a huge heart for global missions, especially in Cambodia. To give online use heightschurch.com/events/mccarty or give checks payable to Heights Church, “Mission Fund” in memo and mail to Heights Church, 106 W. Gurley St. Ste. 200, Prescott, AZ 86301.